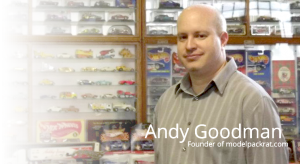 Our Hot Wheels, M2 Machines, Jada and Muscle Machines listings have had a huge boost over the last few months as popular diecast database modelpackrat.com merged with hobbyDB, bringing its 10,000+ diecast listings with it. To mark the occasion – and his addition to the illustrious hobbyDB Advisory Board – we sat down with the original Model Pack Rat himself, site founder Andy Goodman, to talk about collecting and why he thought hobbyDB was such a great fit for Model Pack Rat’s data.

While Andy’s been a collector since he was young his 35,000-strong diecast collection started with one model Mustang.

“I was working my first job and I’d always dreamed about owning a Mustang Cobra. It was nowhere near reality at the point, but one day my girlfriend comes home with the #984 Hot Wheels Mainline Mustang and says ‘I bought you your dream car!’ Andy remembers. “It was a gag gift, but I just thought ‘wow, this is really a pretty cool way of having a piece of the car without having the whole car.’” 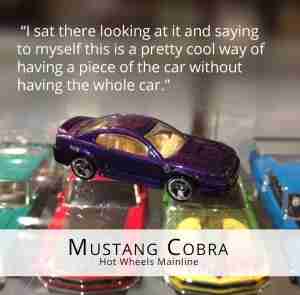 In a scenario instantly recognizable to most collectors, things escalated rapidly from there. First the cars took over a shelf on Andy’s bookcase, then the entire bookcase. Now, some 18 years later, they occupy his finished basement and all the walls in his 4 car, 1,000sq foot garage which is covered in Jada collectibles.

“I’ll never be a Leno, a Seinfeld or a Tim Allen with a garage full of real cars,” Andy says, “but when the cars are two to five dollars, I can have everything I want!”

As well as his vast model car collection – and collections of Legos, Garbage Pail cards, and coins – Andy owns AGoodMan Enterprises Inc, an integrated marketing and motorsports company. He also serves as exec producer of Motorama Events, consults for the Nassau County Cruise to the Show, The Torque Meet Tour and M2 Machines as well as having been a Contributing Editor for Die Cast X Magazine. But it was his diecast models which inspired the creation of Model Pack Rat.

“With a collection of 35,000 items, there’s no way to remember every piece you have. It’s impossible.” Andy explains. “I’d buy a set, forget I had it and buy it again. You end up with a pile of doubles. I wanted to build some sort of cataloging system to keep track of what I have.” 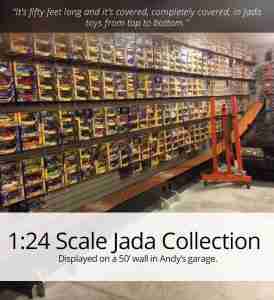 The site began as a personal organization tool but quickly developed into a catalog, which anyone could add to and use to organize their models. Many users, however, just liked using it for research.

After a year, there were 10,200 cars in the database and Andy was averaging 800 to 900 new additins every month. But while the site quickly became a popular destination for 1:64 collectors, Andy soon realized that expanding its audience further would be difficult. “What I’d built was specifically for the 1:64 diecast collector,” he says. “That’s really a niche within a niche within a niche. You really are in that small, small segment. It was never going to have the opportunity to become something big, it was just too segmented.

That was when hobbyDB came along.

“The difference that I liked at HobbyDB, is that HobbyDB is really attracting collectors from a multitude of collectables, really anything.” Andy explains. “It’s not just a matter of having a database for diecast guys. It works for a 1:1 scale car guy or even a guy who collects Mustang collectables. You’ve got crossover there with a multitude of people checking out different things, different topics and seeing different information versus my very niche idea.”

What Andy sees as hobbyDB’s huge future potential also contributed to his decision to move Model Pack Rat over. “It’s really digging into putting in manufacturer, different notes, two-door, four-door, versus my make, model, year, series and brand. They really break down the items into very specific, searchable categories. If people get out there and really support HobbyDB and start entering their own stuff into it, it could be a limitless encyclopedia of information.” 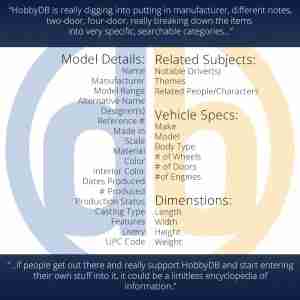 “Using software to catalog your collection is time consuming, nobody’s ever going to lie about that, but hobbyDB is easy to use and really cuts down how long cataloging takes,” he adds. “If you really do have an extensive collection, though, there’s a lot of reasons to catalog it other than just knowing what you’ve got. For example, if you need to file a claim because of fire or theft, you’ve got to give documentation of what you have to your insurance company.”

Of course, with the Model Pack Rat merger, Andy’s own collection is now documented on hobbyDB, instantly making him our biggest user! We’re hoping also that he’ll also be adding some of his more special pieces to the site. He has quite a few of those too. “I’m more about the story than the car,” he says. “And there are a lot of stories behind some of my pieces. Friends that have sent me prototypes. Russell Hughes, who owns GreenLight, personally sent me a mold piece of a Mustang, knowing my favorite car is a Mustang. Those are priceless pieces.”

And as he’s already started his kids on collecting, we’re hoping we might see them on the site too.

“My daughters’ Lego addiction is a family affair. We have Legos all over the house and china cabinets and showcases in my daughters’ rooms. One daughter’s four, the other’s seven, and I’d much rather see them thinking critically, building a product, and taking it apart to turn it into something else. Collecting increases family time all around, but the Legos are definitely the largest link for me and my children.

The truth is, they’re kids once, you get that only one time then they grow up. If you find an activity that everybody likes, it doesn’t have to be Lego, whether it’s diecast cars or Barbie dolls, whatever the heck it might be, if it creates that bond, that’s more important than anything else.”