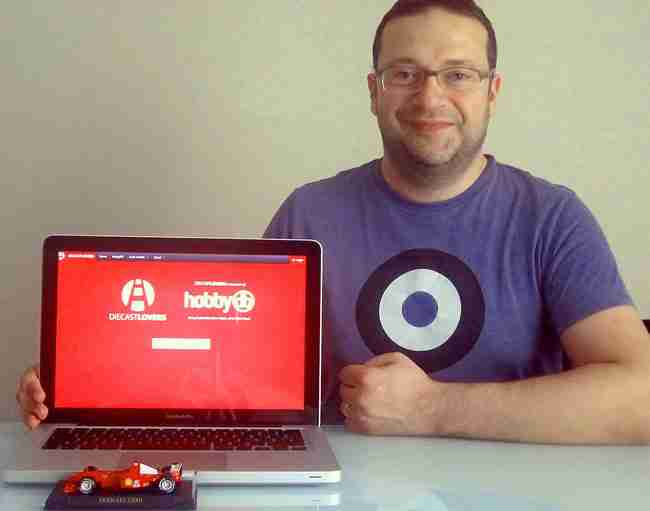 The hobbyDB family keeps getting bigger with the addition of Fabio Di Pane Masi. Some of you may remember him as the founder of Diecastlovers, an Italian based website of many different brands of diecast cars.

For Fabio it all began in 2009 as a catalog of his own models, in particular his favorite brand Majorette.  In mid 2010 it became open for others to add their own collections and information.  Soon there were over 500 users and Fabio spend a lot of time making his site more user-friendly.  Later he introduced a Content Management System (WordPress, the same as used by this blog).  In 2014 the site had over 33,000 collectibles from more than 1,200 users with around 1,000 followers on both Facebook and Twitter.  A Marriage was followed by a daughter and suddenly it became much harder to realize all of Fabio’s ideas for Diecastlovers.  This is when Andrew, Christian and Fabio discussed working together and as a consequence Fabio is now not only contributing his expertise in Majorette and Siku but also his knowledge of the real cars of Italy (such as Alfa-Romeo, Ferrari and Fiat). He spend the last week with us here in Boulder, Colorado meeting everyone, assisting us with the transitions and even doing a shopping trip for Hot Wheels at a local Target and we have now migrated all data from Diecastlovers to hobbyDB.

Diecastlovers included some very unique collection management features, many of which we are going to incorporate into our site. By joining forces with Fabio, hobbyDB continues to grow into the biggest and best database of diecast vehicles on the web.

The aspect of Diecastlovers.com in 2013

Each model had his page in relationship with the model manufacturer and the make of the real car.

It’s great to have you on board!