What is a busk you say? This is a word not often heard today, except if you’re hanging with enthusiasts of sailor-made crafts, like busks. From the late 16th century into the 20th century, rigid busks were necessary to stiffen the corsets and petticoats of women. Crafted from thin strips of wood or other material, sailors crafted them to pass the time on long sea voyages lasting months or even years. Upon their return, they presented these beautiful hand-carved busks to their sweethearts. This tradition was particularly popular in the eighteenth and nineteenth centuries and was most prevalent in seafaring communities. 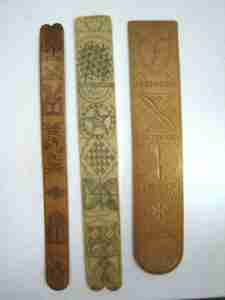 Busks were generally carved from hardwood, but it was also common for the sailors on whaling vessels to carve them from whalebone. These so-called scrimshaw examples are highly prized by collectors. Some are dated and many include the woman’s name or initials. They are often decorated with the same geometric designs found in quilts and other arts of the day, which gives them a great deal of folk art appeal. The quality of workmanship on these sailor-made busks range from crude whittling to finely detailed carving executed by highly skilled craftsman. 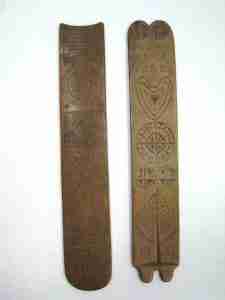 Another material used to make busks was Baleen, but these examples are less common. Baleen is a filtering material attached to the jaws of certain types of whales. These whales filter their food from the seawater by taking a giant mouthful, then pushing the water through these closely spaced rows of stiff baleen plates, catching krill and other small creatures in the process. After shaping the baleen into a busk, the sailors scratched decoration onto the hard surface, often creating scenes with great detail. Impress your friends with an obscure word the next time you’re playing scrabble. “Busk” is worth 10 points!