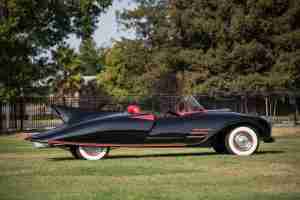 …….and it looks different from what you are picturing. On December 6th, 2014, Heritage Auctions sold what is believed to be the first officially licensed Batmobile. The style of this early Batmobile resembles the 1940s and 50s DC Comics version of Batman’s ride, rather than the 1960s television show version. With a single dorsal fin and a distinctive bat nose, this little known vehicle was designed in 1960 and completed in 1963 by a 23-year-old who was experimenting with a material called fiberglass. Forrest Robinson designed the car, then built it in his family’s barn with the help of his friend, Len Perham. They started with the frame of a 1956 Oldsmobile 88 with a powerful 324 Rocket engine and completely customized it. 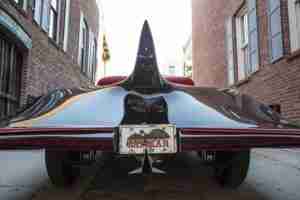 The car was originally silver until a few years after it was built, when the ABC Television series became a hit. It featured the iconic Batmobile created by legendary designer of Hollywood vehicles, George Barris.  His version of the Batmobile became part of the American culture and is the oh-so-cool rendition that we all know. Robinson soon changed his car to the new “official” Batmobile colors and it became the first car ever licensed by DC Comics. This unique car was touring as the official Batmobile at least year before any of the famous Barris Batmobiles came on the scene.

An ice cream company traveled New England and beyond, promoting their business with this first Batmobile. After a time, the car was retired and Robinson sold his prized creation for $200. It soon ended up in a New Hampshire field, where it lay deteriorating for nearly 50 years. In 2008, the car was discovered and rescued from further decay. It changed hands a few times before being completely restored. Recently the car was offered for sale by Dallas based, Heritage Auctions, the largest collectibles auctioneer in the world. It sold for $137,000.00. to an undisclosed buyer.

In case you are following Batmobile sales as they make Bat history, the more widely recognizable George Barris Batmobile sold in January of 2013. After he built it, the car remained in his possession until it was sold at auction for $4.62 Million. Holy fat-stacks Batman! Although the original Batmobile was eclipsed in price by the later one, it still looms large in the hearts of true DC Comics fans.

Last but not least, if you want to know when it comes up for sale next add the 1963 Batmobile to your hobbyDB Wishlist!