I write about old (pre-1940) and antique (true centenarians) on my blog and since I’m a retired photographer, I thought I would share some techniques to help you take better pictures of your collectibles.

Photographic Lighting
Let’s take a look at a Hubley Pile Driver Truck I bought recently. I use tungsten quartz lights called “focusing spots”. Of course, any lighting will do. It’s usually better to use indirect sunlight, since this light will have less contrast, and record the bright areas (highlights) and the dark areas (shadows) much better than bright and direct sunlight.

I used 2 lights for the first set of photos to illustrate some basic principles for photographing a toy. The first light that was high and to the left of the toy, created the direction and depth to the toy. The second light (to the right and lower) added detail into the dark shadow areas. This allowed the camera to capture the overall detail of the toy best.  I also added a few silver reflectors to add some extra bright spots (highlights) to the toy. 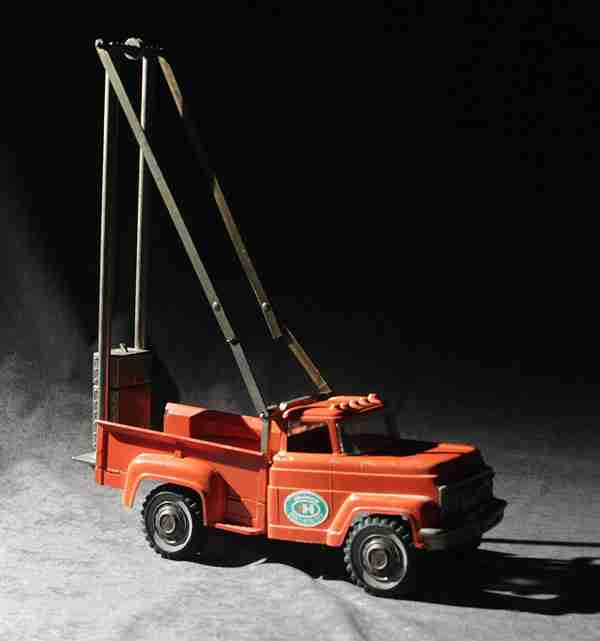 Here is the first light (high and to the left). It’s called the “main light”, and it’s purpose is to create the 3D (depth) and mood for the photo. 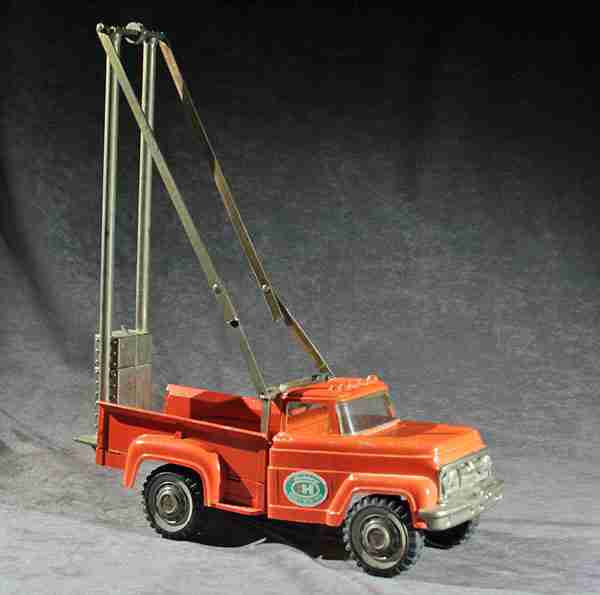 This light was positioned to the right and lower. It’s purpose is to add light into the shadows. It is less bright than the “main light” so that the main light will still create the depth of the image. Also, in a photo, you want to only see the effect of one light, since we only have 1 sun. 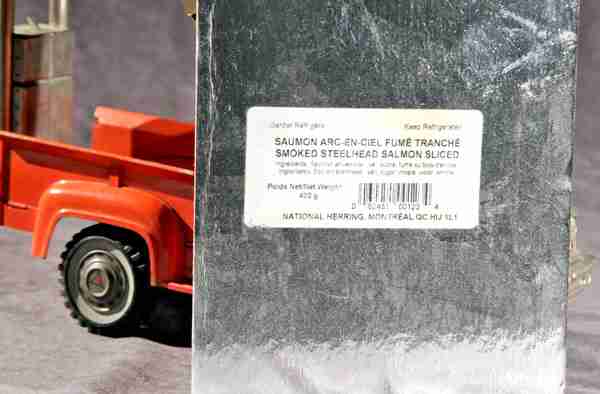 This photo presents a silver reflector card. You can use aluminum foil glued to a piece of cardboard. In this case, I use the discarded silver foil on cardboard boards that come with smoked salmon or trout.  The silver cards add some extra bright areas or sparkle to the toy truck. 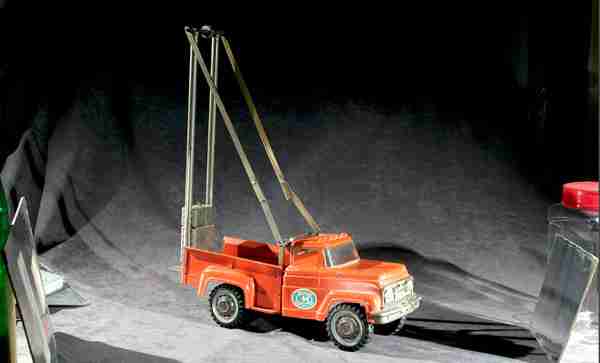 In this photo, you can see how I used 2 reflector cards. I also used a plastic coin-filled champagne bottle and an empty plastic nit container to support the reflectors. 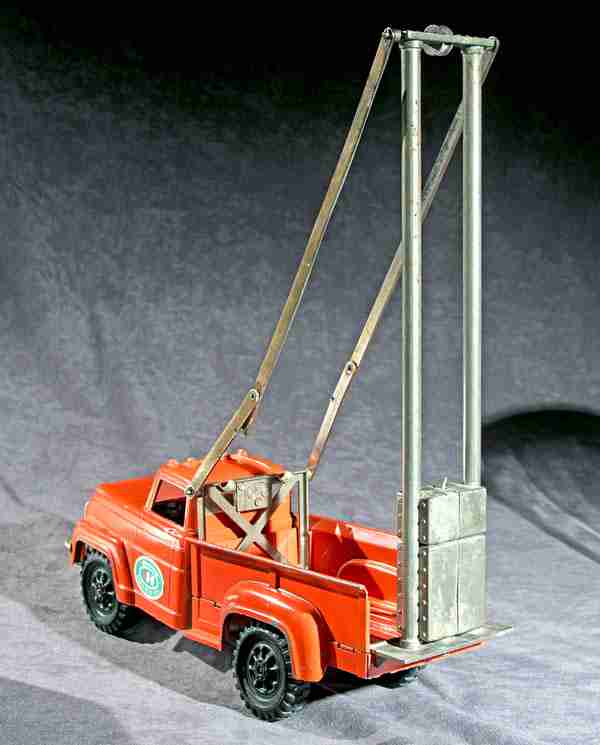 You can see the double weights of the pile driver in this photo.
I also originally purchased this toy because it was unique. It’s a pile driver and originally it had a string attached to the top driver part.  The toy also came with smaller pointed “poles” made of wood. They would be placed under the driver, and as the driver was release by a cord, the heavy weights came down, and drove the piles (pointed poles) into the ground. 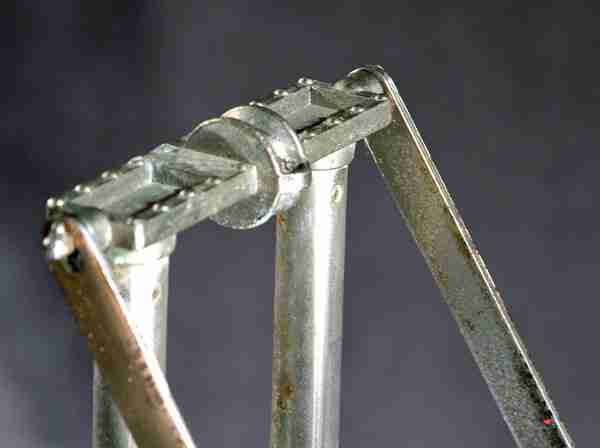 You can see the double cast wheel where the sting would wind around and pull up the 2 weights. Once the 2 weights hit the top, the weights could then fall (one actually released from the other). And hit the pile (wood pole). Doing this repeatedly would eventually force the pole into the ground.

Toy Photo Details
When you are photographing a toy, or anything, it’s important to present some of the details of the toy for the viewer or buyer to see. Also, it’s crucial to show the condition as honestly as possible. 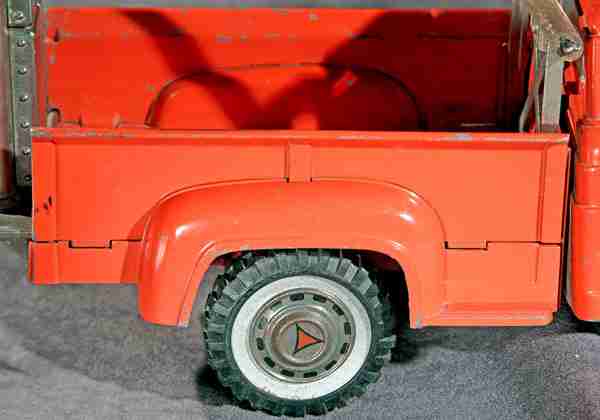 This photo of the side of the truck shows you the detail of the panel sides that were  cut out separately (pressed steel) from the truck chassis. 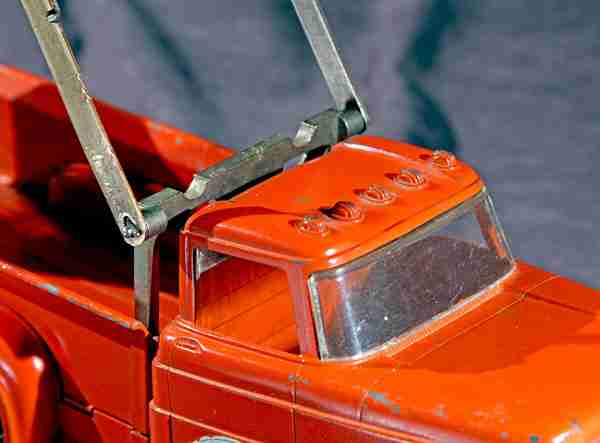 This photo shows you the front of the pile driver where it fits into slots of the truck. Also shown are 5 truck roof lights that were cast into the detail. 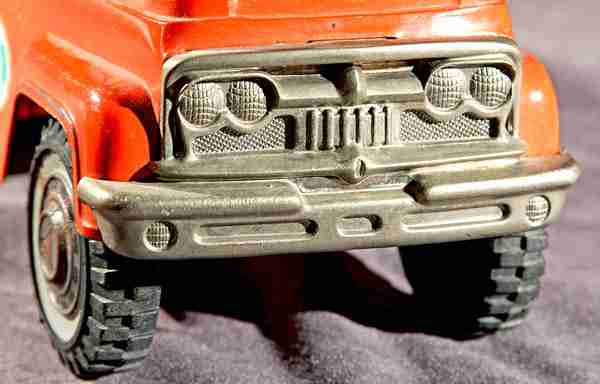 This photo presents the nicely-detailed cast iron front fender and grill of the truck. 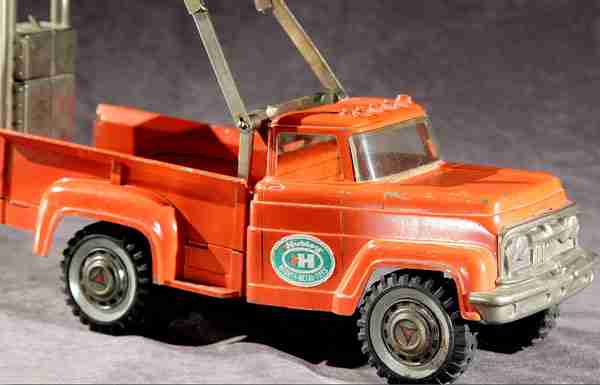 A close-up of the side of the truck

In 1965, this nice toy sold at the suggested retail price of $3.98. When you look at the nice details, the components, and the time that it would take to assemble the toy, it certainly was well worth the price at the time. Good photography will increase your chance of getting a good price for your collectibles (or enjoy showing it to others online).