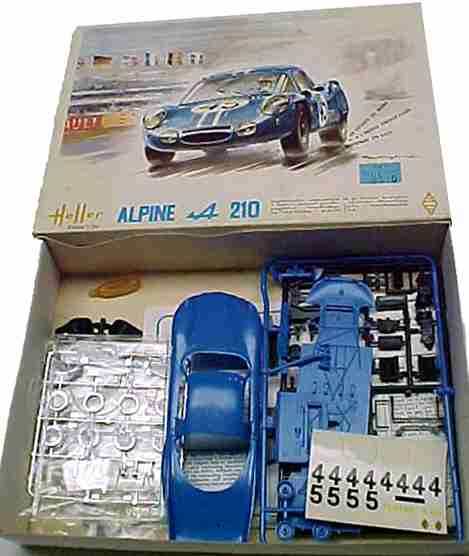 The first kit I designed was that of an Alpine-Renault A210 Le Mans car.  I traveled to Dieppe to the Alpine factory and was able to take all the measurements, pictures and information as a personal guest of Alpine’s founder  and president, Jean Redele. He also loaned me an Alpine A110 Berlinette 1300S, and I had great fun with it for several weeks. It actually pushed me to purchase one, that I raced until I smashed it comprehensively while trying to avoid an errant car. 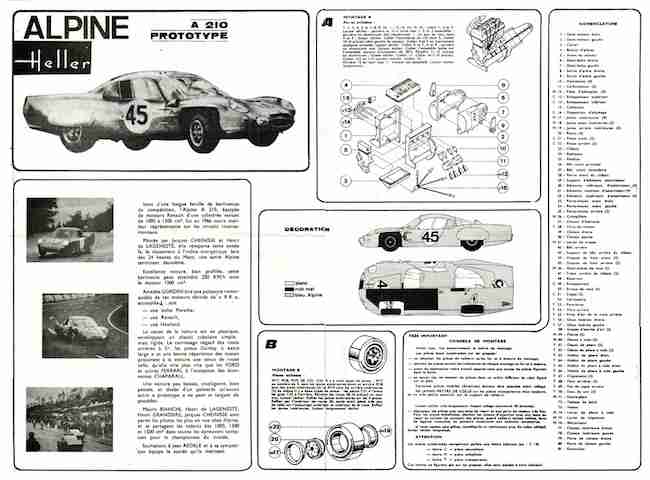 I tried to do a good job on the new model and introduced some new features that were not present in any available kit, such as separate rim sections for the racing wheels, real rubber safety belts and suspension springs made of steel wire that one could form over a nail, a trick I learned from a great model maker long passed away. I even tried to get a windshield rubber seal to work but it did not, and I had to revert to the standard method of gluing the windshield in place. The kit was well received in the period magazines and sold extremely well to a public welcoming a French racing car model, something that simply did not exist then.

Not much has survived of the Alpine A210, except for the assembly notice of which I drew the images, and assembled the old-fashioned way, by gluing the text blocks in place. Those were the days!

There were plenty of “firsts” in this kit, including that one had to make his own suspension springs wound over… a nail! The wire and nail were supplied in the kit. This system worked very well and was reconducted for most of the kits I designed for this company. 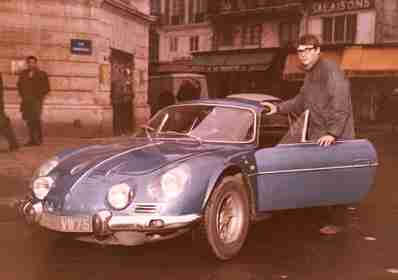 Soon after I had a Alpine-Renault 1300S, here in 1968 in Paris (before the turmoil that hit the country and caused a near revolution). This car was unfortunately destroyed when I hit a snowbank while the car was fitted with Dunlop racing tires for dry pavement.  A year and a half later, was on my way to Los Angeles, California.

AMT negotiated with Heller for the distribution of some car kits, and issued 4 different “double” kits in 1971. The injections were packed in clear plastic bags and sent to the American company that repackaged them in large boxes with their own illustrations, that unfortunately paled compared to those of Paul Lengelle. The Alpine was packaged with a version of the Heller Renault R8 Gardini as one of the sets in this series.