If you’re starting a new model car company, you need to find a niche that makes you unique. There’s only so much shelf space that can be devoted to yet another model of, say, a 1957 Chevy Bel Air. Automodello, based in the Chicago area, sets themselves apart in several ways.

“Automodello models are all resin cast and considered to be Resin Art,”  said James Cowen, the company CEO. “We support 1:43, 1:24 and 1:12 scales for overlooked marques and models.” True to his word, there  aren’t a lot of models of Bricklins or Griffiths or Intermeccanica Italias available anywhere else. Nor are there a lot of 1:12 Formula 1 cars out there. 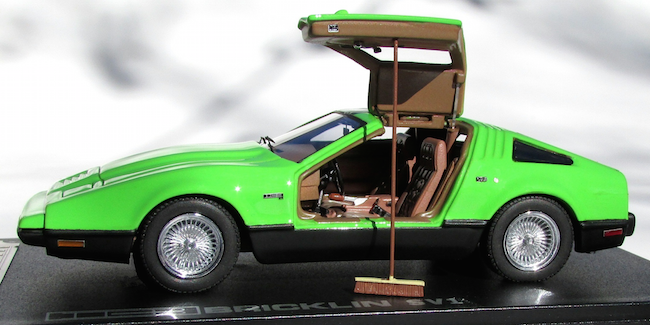 The Automodello Bricklin model includes a matching broom to hold the gullwing doors open, an authentic detail unfortunately too common on the real car.

That doesn’t mean everything they offer is an automotive oddity. Their first 1:12 scale car represents Jim Clark’s 1967 Lotus 49 Grand Prix car, instantly recognizable to most racing fans. But the scale, material and level of detail still sets it apart.

The team at Automodello features a large number of folks you might recognize from various areas of the hobby including magazines and other media. In addition to Cowen, the design team includes Raffi Minasian (who did design for Ferrari, Toyota and others) and Cara Seekell, Automodello’s web designer. Their Technical Advisors include experts and luminaries such as racing legend Dan Gurney, Herb Grasse (designer of the Bricklin), Ed Schoenthaler (owner of the Brooks Stevens Cord and other significant one-offs) and Andrew “Jack” Griffith (of the Griffith car company mentioned above).

Automodello is making hobbyDB the home of their official online archive. Even though they have only been in business since 2010, there are almost 100 models in our database already. At the rate they’re going, you can expect that number to grow. In fact, there are already several models listed as “coming soon” and we’re pretty excited to see them.