We recently looked at one of the large scale slot cars that Philippe de Lespinay designed for Cox in the 1970s. As he was beginning his career as a professional model designer, he was also a member of a growing community of slot car racers in France who actually raced for money in the 1960s. Here are some recollections and his cars and the French racing scene…

In the 1960s, slot car racing hit France in a big way. I was caught in the fad and spent much of my time on this new hobby that I loved. I’ve never stopped since, save for an interruption of 21 years between 1973 and 1994.

I began as a simple amateur in Paris, first using Revell cars since, working for the Heller plastic kit manufacturer, I had access to some samples they were thinking about importing. Quickly I found that they were not up to the job and began making my own. 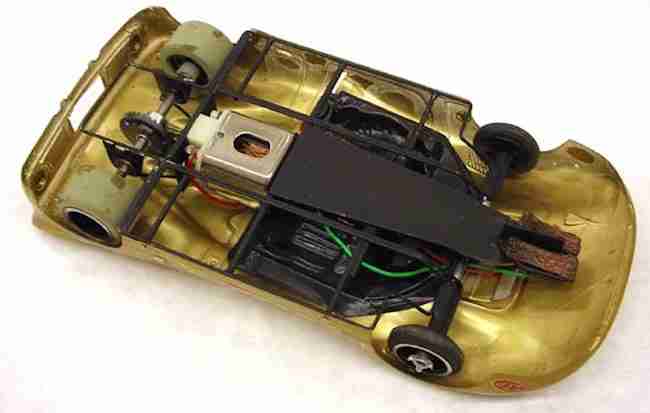 There were two main raceways in the city, one by the Opera, one in Neuilly, a chic suburb near the Etoile plaza. That one was my “home raceway” and was located on Erlanger Street, and was simply called by the fans, “Erlanger.” The raceway had four huge Revell tracks, the largest having over-and-under passes that made the car invisible to the driver for what seemed like an eternity. The raceway was extremely clean, well appointed and run by Raymond Ami, a person who later became Honda France’s racing manager. Every evening, the Erlanger center had “money races” where the racers would pay a 10-Franc (like 2 bucks) entry fee and the winner collected actual cash in the amount of 30 to 45 Francs ($6.00 to $9.00) depending on the number of entrants.

Those races, run on the “smaller” tracks, were my favorite hunting ground… many evenings for a period of a little over two years, I would show up with a contraption built from Dynamic bits and a Russkit Lotus 40 body, later a highly-chopped Lancer Ferrari 350 Can-Am body. The early cars had an inline motor, generally built from a Mabuchi or Hemi can, an armature rewound by Yours Truly with Mura silver wire, epoxied and tied with very strong fiberglass thread, and a Tradeship commutator. Later cars had sidewinder-mounted Mabuchi FT26 motors de-wound by Hot Slot.

This well-used Ferrari was one of those evening prowlers that kept me cash-rich to purchase the parts needed to build more of them as well as a good dinner at the raceway’s cafe and the gas to go home in my Peugeot 404 wagon. 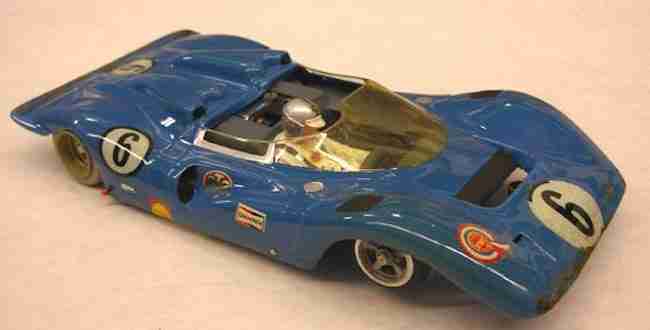 The chassis was standard Dynamic fare with hinged brass tongue, my own body mount, and my own version of a Hemi can, fitted with one of my arms (generally a double 27 wind) and Mura Magnum 88 magnets. The endbell was from a Cox TTX150 motor. The pretty front mag wheels were from a Dynamic Super Bandit, while the rears were Cox aluminum screw-on with Classic gray sponge tires (now fossilized!) 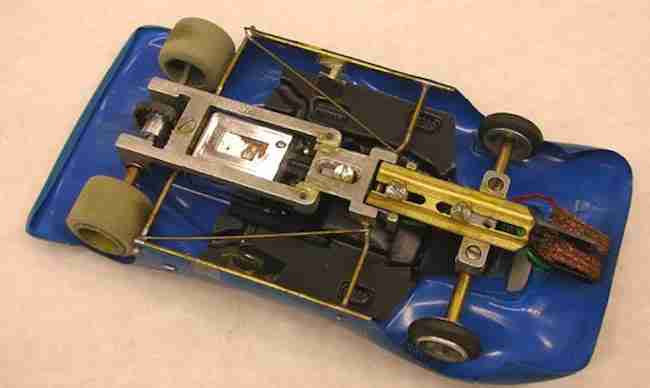 My later cars used hand-built wire frames with brass-plate drop arms and Dynamic guides. This Ferrari 350 has Riggen wheels, a rewound FT26 motor using a Champion 601 can and endbell and one of my rewound arms. The chassis uses pillow blocks with large ball bearings, and is not soldered but… brazed with bronze welding rod. With a Mirage body, it finished in third place at the 1000KM of Paris in 1967, and was pictured in the French magazine “Champion” reporting the race.

My motors were assembled as best as I could with the limited means and technology available to us then, but these have survived quite well. One has a Champion “507R” endbell, I must have been a millionaire that day!  Right: Some of the surviving armatures. All are double or triple wound on Hemi blanks, epoxied, tied, and statically balanced (there were no dynamic balancers available in France) 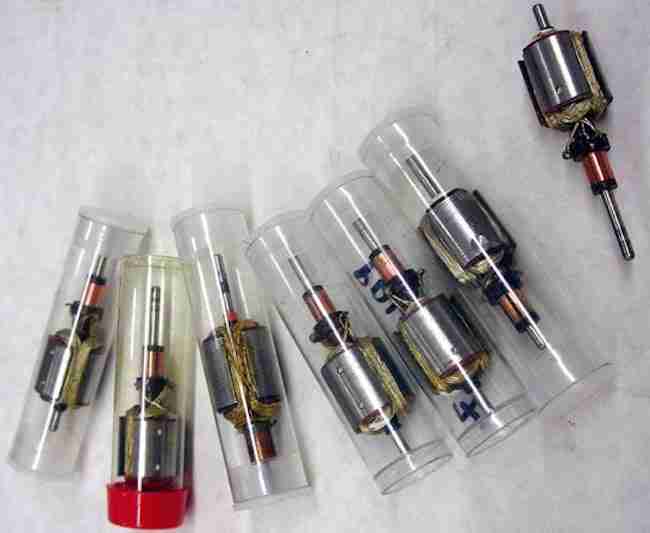 This car, another 350, has quite an interesting story: it won the 1000KM race in Bad Godesberg, Germany, in 1967. A team of six French drivers and this machine defeated nine other teams from Germany, Switzerland, Italy, the UK and Sweden on a 10-lane speed-bowl in that city.

The track was a huge 10-lane elongated figure 8, not the least challenging, and it was a true speed bowl. Most of the foreign teams quickly gave up on their own cars and did like the locals, purchasing new Fleicshmann Lotus 40 kits as they ruled the track. Well, we (the French team) stuck to our guns, and while slower, we gained on reliability and inflicted a huge defeat to the other teams. 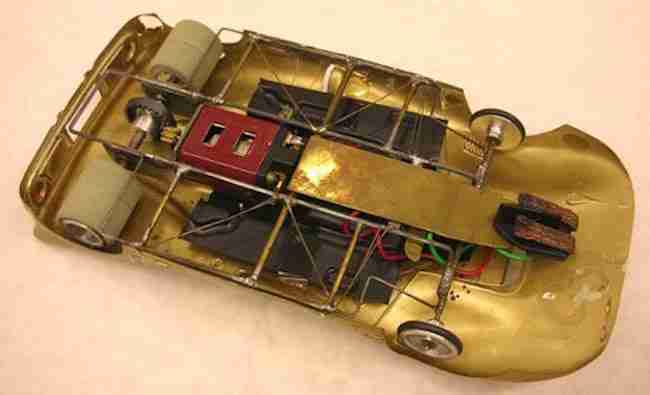 The car had a built-up wire frame, (See photo at the top of this article) a Swiss-built Buhler can with a genuine Mura silver-wire #26 arm (we used two to win the race, that lasted 53 hours!), and multiple sets of homemade rear tires on home-machined extra-wide hubs. The rubber used was by Classic and was doubled to get enough width.

As time passed, brass became the material of choice and brass rod and tubing became more available, so I built this Lancer-bodied Chaparral that was quite an effective car.

The fenders on the Lancer body were flared using the American pro-racing technique taught to us in the few slot car racing magazines we were getting from the USA by our idols, Morrissey, Steube, and cohorts. We used to devour those publications as soon as they arrived, then we would rush home and copy the latest chassis design, or rewind our motors following the latest specs… We were totally addicted. Those were the days! 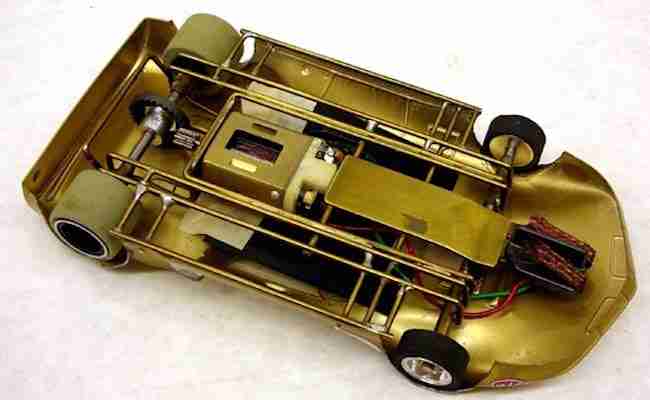 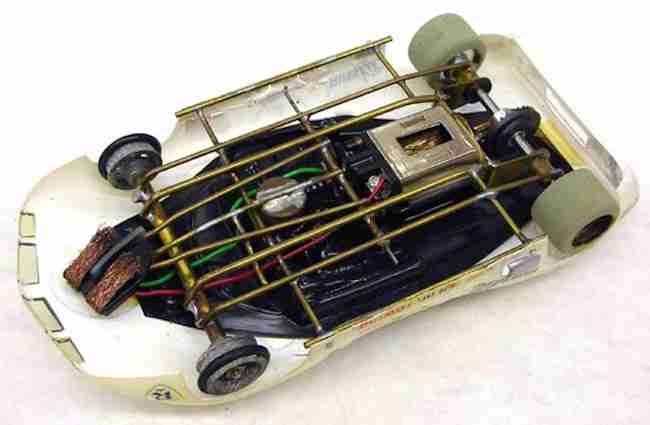 This one, I remember well and it was inspired by the early Team Russkit cars. The main difference with the American cars is that I used a can-side drive for the motor to get more weight onto the rear wheels and could not understand why the Americans were using the endbell-side drive system… all that was to change in early 1968 when we heard of the angle-winders. 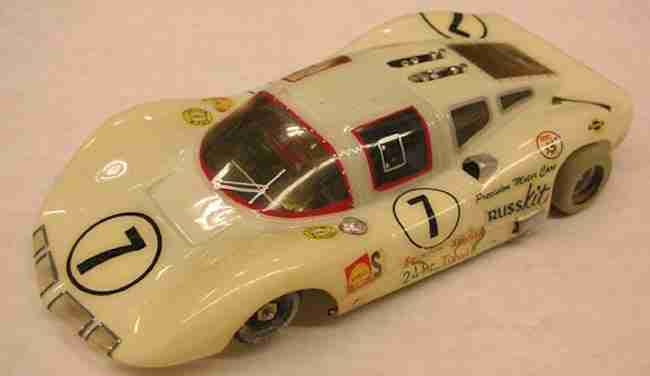 Somehow, some of my old cars survived all these years and were acquired a few ago by Scott Bader for his museum in Los Angeles.

I had no idea that 1960’s slot car racing in France was so technical.   This rally takes the model car collecting habit to a new level.  You are not just buying models of cars you wish you could own, but you are also replicating the whole racing scene in scale model form.  Bravo!

Wouldn’t you just love to see some video of those races?

Videos would be cool!  Here is an old one… Not quite the same technology though! 😀

Wow! That old commercial is awesome! Had no idea they made horse racing bodies for slot cars! Thanks for sharing that!