Anyone who’s interested in American cars can name the principle engineers of the Shelby Mustang. There’s Carroll Shelby, of course, and automotive journalist Brock Yates, who are usually cited as the folks who turned a sporty but mild-mannered coupe into a performance beast. But there were a lot of visual cues that set the Shelby cars apart, and you might not be familiar with the names of the folks who handled those aspects. 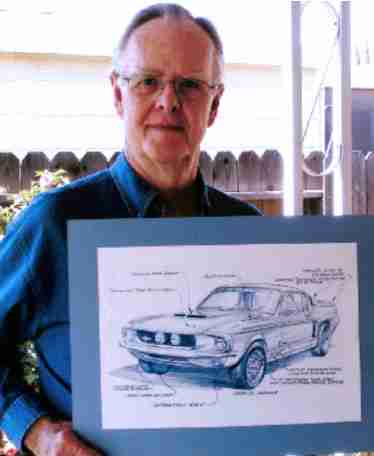 McHose with one of his design sketches.

Charlie McHose is one of those people. He kindly took some time to talk to hobbyDB about his days on the project and shared some photos from his archives as well.

Fresh out of college in the early 1960s, McHose went to work for Ford Motor Company in England. He did a lot of detail work on interiors and grilles for Cortinas and other European models before moving to Detroit. “I worked on the first Mustang a little bit and also some refrigerators.” Yes, Ford Motor Company dabbled in appliances in those days. “Then one day in 1966, I was told I was heading to California to work on a new project.”

The first generation of Shelby Mustang was designed as something of an afterthought, a way to spice up the performance and image of very successful but modestly performing model. Unlike those first cars, the 1967 Shelby was developed along with the incoming car, so McHose was involved from May through July of 1966. The skunkworks were set up in a couple of old airplane hangars at LAX Airport in Los Angeles. (Sadly, the runways were not used for testing, which would have been even more awesome).

“When I first arrived, we didn’t have any cars to work with yet,” he recalled. “So I started on aluminum wheel designs. After a few weeks, we finally got a couple of cars… a fiberglas body and one beat up metal prototype to work with.” The cars were not complete models, missing the interior, glass and trunk lids. (In fact, the steel body was misshapen because that particular car had previously been used for some rather hard seatbelt testing.) Charlie’s main order of business: get to work on the scoops.

From left: Early roof pillar treatments included windows and flush vents, but inspired by the GT40’s scoops, the final design was more aggressive.

Visually, some of the most important differences between the base Mustang and the Shelby version are the hood scoops (to help the engine gulp in more air) and the side scoops (to cool the rear brakes), and the roof pillar scoops (functional parts of the cabin ventilation, but mostly there to add extra visual interest). McHose worked on them all.

“The hood was a completely different part from the standard Mustang,” he said. “Not only was it fiberglass, but they decided to make the front fenders a few inches longer, so the entire hood grew as well.” So rather than bolt-on parts, the scoops are perfectly integrated into a whole new hood. “All of this was in the days before computer design,” said McHose. “We sketched, drew with markers, built shapes out of clay.” The roof scoops were add-on pieces that covered already functioning vents, but the fender scoops were designed to cut into the decorative vent-like character lines of the regular model and actually do some work.

Most of the engineering and interior modifications were handled elsewhere. McHose says he didn’t get to work directly with Carroll Shelby much. “By this stage of the project, Carroll had already made most of the engineering improvement decisions, so he just came around to check in and approve what we were doing,” said McHose. It’s not like Mr. Shelby was being indifferent to this project, however. He just had some other things going on as well. “Carroll spent most of his time in the next hangar over working on the GT40s, getting them ready for LeMans.” 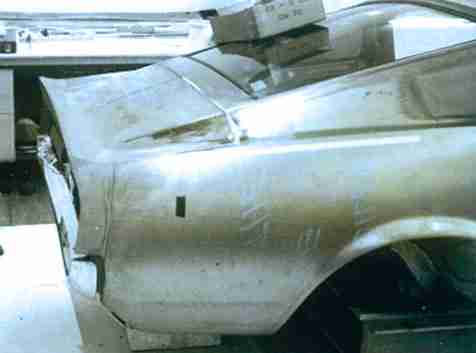 The integrated rear spoiler was inspired by the tail of the GT40.

Speaking of which… SPOILER ALERT! Inspired by the tail end of those GT40s, McHose also helped design the integrated spoiler on the decklid and rear quarters of the car. The final roof pillar scoops also echo the look of the GT40 as well, instead of the rear-facing vents that had been proposed at one time.

While in California, McHose got to drive a first gen GT350… as his daily driver! And not just any old ’66 GT350… “This wasn’t a factory production car, it was prototype number one, according the serial number.” Lest you get too envious, the car had already been raced, tested, modified, and generally beat up to the point that it was not in pristine condition. “It drove like a truck,” he said. “It sounded like a tin can, except when you downshifted to accelerate. Then it sounded terrific!”

McHose’s participation in the project was done by late summer, and he didn’t see a finished car until that fall in Detroit. In fact, he says never owned a ’67 Shelby himself. “Back then, employees would buy a new car from the factory, drive it for six months, then sell it and get another new car,” he said. “I eventually got a ’68 Shelby for about six months and moved on to the next car.” Many of the features he designed had already been changed for the new year, so he has some minor regret not snagging one that he worked so diligently on.

If participating in the creation of one of the most iconic cars wasn’t enough of a career coup, he also worked with a young designer named Larry Wood at Ford. Larry, of course, would go on to Mattel and become involved with Hot Wheels as their one of their chief designers, a gig he still does today. And after his days at Ford, McHose would reunite with Wood for several years at Mattel.

McHose is modest about his contributions to what is considered the most potent and beautiful version of the Shelby Mustang. “Pretty much all I did was work on the scoops. I’d been working in Ford’s show cars studio, and they could have sent any of us. They sent me.” he said. “Back then, one department worked on the front of the car, another group worked on the back, another created the interior. We had guys cutting out cardboard templates to gauge how the various shapes would align. It’s a miracle all the parts of a single car all fit together in those days.” That may be the case, but in the for the Shelby, oh, did they fit perfectly! And we have Charles to thank for parts of that. 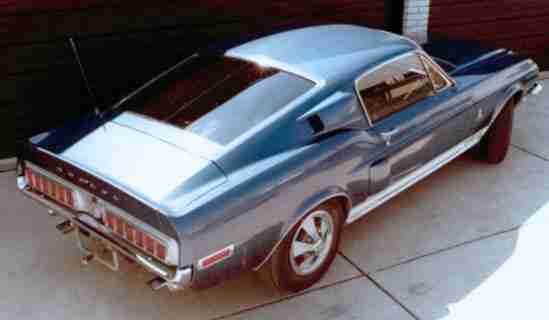 Charlie owned this blue ’68 Shelby Mustang for a while before moving on to another new Ford. (All images courtesy of Charley McHose)

I actually have a Poster from a bike show in La Mirada Ca with Charles McHose’s signature on it. It looks like a son had it framed for his dad. It’s from 1982.

sorry this is the picture

here is the total picture

Wow, casually browsing and thinking about some people I remember who had some impact on my life. Always a sport car fan, I met Charlie McHose in 1957 at NAS Corpus Christi.  Lieutenant Don Speed started a sports car club which included Bob Lutz and Charlie McHose. Charlie had a beautiful Porsche 356 (Which I learned he sold to finance his college classes at the Art Institute of Los Angeles” Bob Lutz didn’t have a car at the time, he rode with a guy named Les Morisett.  The last time I saw Charlie  was in 1958 when I was going to a Navy school in San Diego and he had got out of the Navy and was attending college in LA. I am attaching a pic of my MG TC which I drove in some of our sports car club events.