From Newsletters to Databases: The Evolution of Information 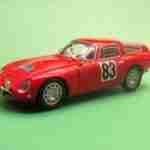 by Karl Schnelle.  This article appeared first on MAR Online, an excellent diecast blog and is republished with kind permission of both the author and publication.

I’ve been thinking lately about how our hobby has changed and how we get information about our hobby. Back when I started collecting as a kid in the US, there were not many, or really any, model car collectors in my city.  I somehow found a newsletter called Trader’s Horn  (1974-2005) that was a combination editorial by a knowledgeable collector and sales/wants ads. Then along came the MCCA newsletter (Michigan) replaced by Model Car Journal (California) in the 1970’s and soon gone by the early 1980’s. 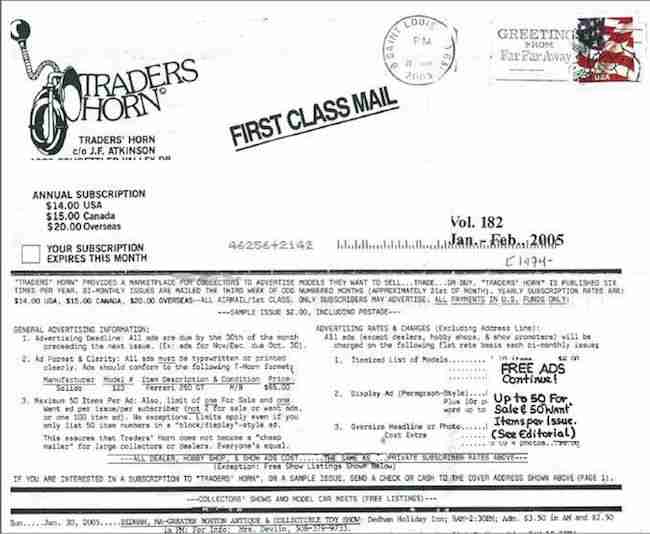 There were no toy shows that I knew of back then. After I moved to Chicago in the 1980’s, I discovered the big shows there and in Toledo, OH. Shows were good sources for adding to the collection but not really for knowledge about the hobby.

During that time, I discovered three books by Cecil Gibson from the UK (one is pictured below), then the series of books published by Schiffer in the US (still in print!), written by Dr Ed Force -about Dinky Toys, Corgi Toys, Matchbox, Solido, etc. So in the 1980’s, books become the main source of discovery about variations, gaps in my collection and what to look for next. 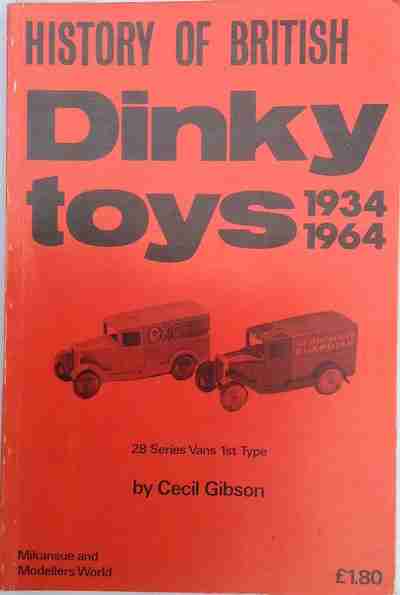 Chicago had huge newsstands back then, so I discovered the first issue of Model Auto Review (1982) and  also Model Collector (in its fifth year, 1991). All the above was the status quo until May 1997. That’s when I joined a new website called eBay… perhaps you’ve heard of it? This did not replace books and magazines, but it did replace Trader’s Horn and many toy fairs.

Many online forums have popped up since then, but if you think about it, eBay has become the default database for collectors to lookup not ‘value’ but also variations and even find gaps in your collection. I’ll go to eBay many times to look something up with no intention of buying it. So for the last 19 years I have been doing that.

Then last year, I discovered a new site, hobbyDB, designed to be a database for collectibles of all kinds. The admin team are model car collectors so the DB is currently dominated by that subject now. With fellow collectors’ help, I have added sections on Märklin RAK and RAMI. Now I’m thinking about how to approach my other favorites: such as Tekno, Vilmer, etc.

With two online ‘databases’ now, I wanted to compare their content. One way to do that is in the graph below. I selected 10 representative brands to compare – some that I thought were popular and some that I like myself. hobbyDB counts are along the bottom x-axis and eBay counts are on the left y-axis. 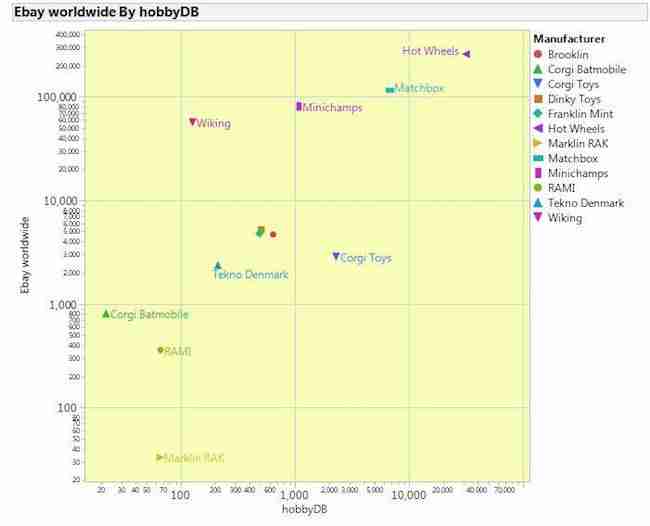 Another learning was that the trends on the two databases are about the same. eBay has many more items but they list every example for sale; hobbyDB only lists unique examples. In a recent blog post, that is in fact what one of the hobbyDB admins said:  “On hobbyDB, [a collector] can see everything that’s ever existed, regardless of whether it’s for sale or been sold recently.”

Just by coincidence, I also picked three that all cluster together in the middle: Brooklin Models, Franklin Mint,  and Dinky Toys.  I was surprised that they had such similar number of listings on each site.

On the low end of the scale are the Märklin RAK and RAMI, both brands that I helped upload to hobbyDB with 66 items each, but eBay lists many more RAMI items for sale than RAK. Is this indicative of the number made per item? Both are old and obsolete now. The Batmobile phenomenon is also shown on the graph: hobbyDB has 20 different Batmobiles, but eBay lists 500 for sale! 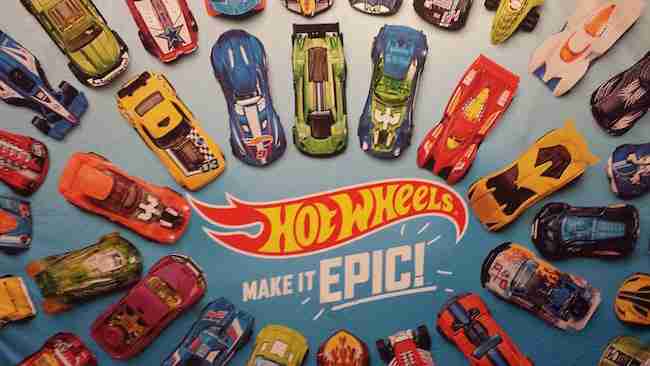 To understand more about the Batmobile and the Hot Wheels markets, read another recent blog from another of the hobbyDB admins: How Big are the Collectible Markets? Are we really spending $200 billion every year on them? You might notice I included the brands from this blog in my graph above. I think it’s a fascinating story. The Evolution of Information deserves some more thought.