We’ve met a lot of diecast customizers at hobbyDB (and we hope you’ve been following our profiles each week so far), but Jimmy “The Boxman” Chavez does things a little differently. Living up to his “Boxman” nickname, the packaging is often the star of his projects. Standard blister packs simply won’t do for Chavez. His vehicle and card graphics are spot-on designs that look professionally produced. And then he takes things way further with innovative combinations of card shapes and blister forms that reflect the theme of the car.

Take his Evel Knievel Drag Bus for example. Cutting the corner of the card to reflect the shape of Knievel’s “Number 1” logo is a great idea. Putting the bus on a miniature jump ramp inside the blister?  That’s genius. Looking at it, you might think Hot Wheels had actually produced this in the 1970s. 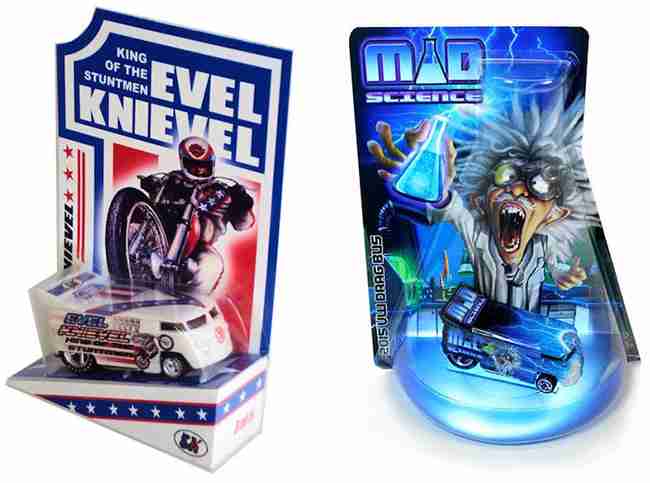 Or how about his Mad Science bus? The overall graphic appearance ties together so well you almost don’t even notice the blister is the shape of a glass beaker, with the card following those contours on one side.

Chavez has been at this game for about 20 years, he said. “I started out turning Hot Wheels Highway Haulers into beer trucks.” He’s currently adding his official archives to hobbyDB, and we hope to have some photos of those early efforts soon.

As for his most difficult project to date, he considers his House of Kolor Paint Drag Bus to be the winner. The vehicle itself was probably no more of a challenge than his usual perfect paint jobs. But the packaging… wow! “I put it in a real paint can.” he said. “I had to hand cut the display window with an X-acto knife.” 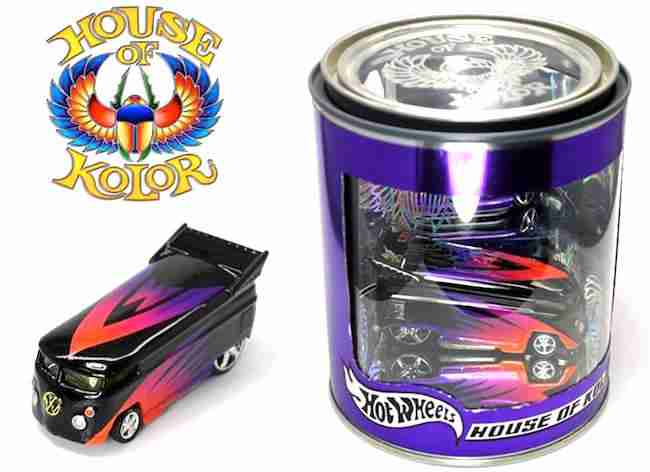 One of his most ambitious and best-known projects didn’t even include custom vehicles. To show off his collection of 2003 Red Line Club exclusive Hot Wheels cars, he built a diorama of a miniature auto dealership. With its checkerboard showroom floor and pennants hanging over the parking lot, it’s understandable if you thought this was an actual offering from Mattel.

All of this precision and creativity looks like it should take crazy amounts of time. Nope. He said his projects run “a couple days including design” in most cases. Even when the case itself might be the most ambitious part of the project.

Of course Boxman works on things other than the Drag Bus, such as this Transformers Dairy Delivery and Fire Bug Custom Beetle.

Jimmy’s items generally sell out fast. Add to your Wish List and hope it comes up for sale (you will get a notification if it does).