When BMW took over the Mini brand of automobiles, enthusiasts held their breath waiting to see what sort of shepherd they would be for the iconic marque. The good news is they kept the factory in Oxford, and they designed a car that echoed the proportions along with some of the quirky details of the old car. On the other hand, many purists were upset that the overall size of the car grew significantly.

A good way to compare the two cars is to look at two 1:18 scale models.  In full size, the reincarnated Mini is about 20 percent larger in every dimension than the original. The proportions hold up here, seeing them at this size really brings that difference home. In one corner we have the Testors 1959 Mini, and in the other, the Joy Ride Austin Powers “new” Mini. Both models are out of production and gaining collector value in the secondary market, although affordable versions can still be found online. 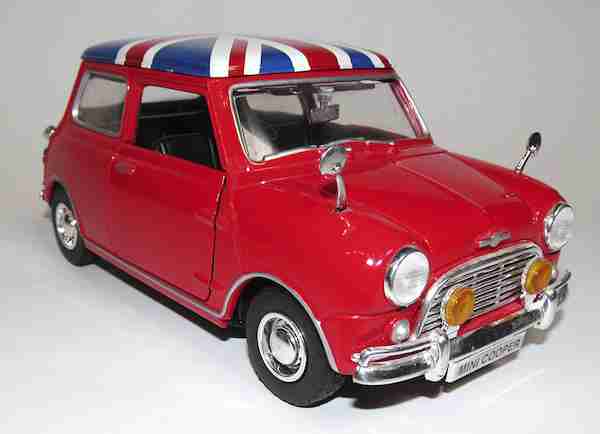 The Testor’s model came as a kit requiring some simple assembly. It’s odd that a company best known for making paint and glue for model builders would offer a kit with a pre-painted body that screws together, so no paint or glue is required. 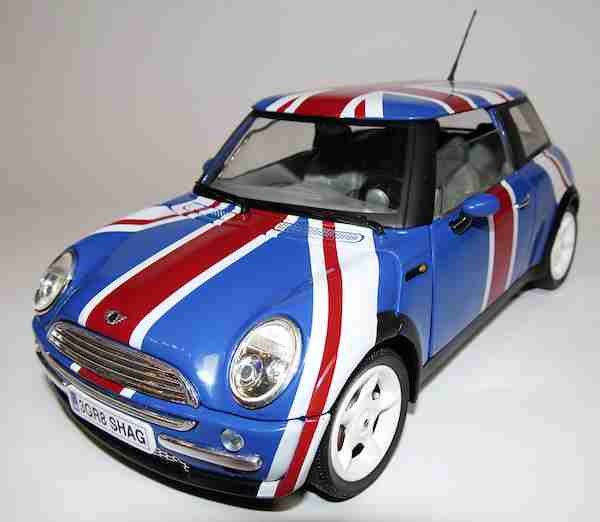 On the other hand, a bit of paint would have made for a more accurate model, as the engine block is bright red instead of the correct greenish-blue of a real Cooper. The car seems a little pudgier and rounder than the original — especially in the roof area — but the overall shape is unmistakable.

This model of the new Mini has an interesting lineage. It was marketed under the Joy Ride brand, a division of Racing Champions/Ertl several years ago. When you take the car off its base, however, the name underneath reads “Solido.”

In all likelihood Joy Ride needed to produce a model quickly to take advantage of the Austin Powers license, so they made a deal to use Solido’s molds. Also on that base you will find annoyingly long molded shafts to accept the screws that hold it to the base. 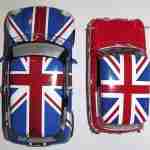 Here’s a perplexing detail: despite the fact that the Mini represents the UK as much as fish and chips or The Beatles do, the Union Jack roof graphic is incorrectly executed on both cars — although the same can be said for the cars upon which these models are based. On the proper Union Jack the broad diagonal white stripes should line up straight across the flag in an X shape, while the thin red stripes should be offset in a pinwheel effect. The original Mini never did get the offset right, although the factory version of the modern Mini approximates it pretty well. However, the movie car wasn’t factory-painted; it was by the film crew’s prop department, and they completely rearranged the spacing so the stripes could be extended down the sides of the doors and the hood. The upshot is that although the graphics on the roofs are a far cry from an actual Union Jack, the “errors” on the models are fairly consistent to those on the real cars. 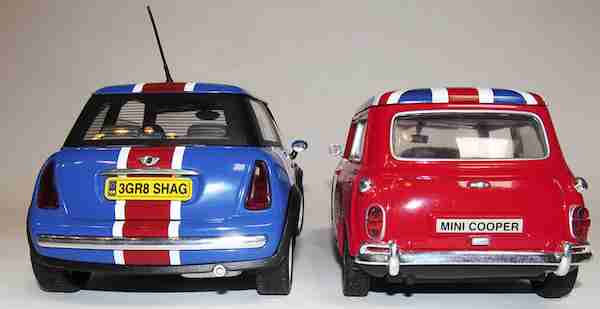 Flag flaws aside, these cars are both a hoot to drive in real life, and good fun to have in your collection. And as a bonus they take up less space on your shelf!

This article originally appeared on diecastx.magazinecom