We’ve featured several diecast customizers over the last couple of months, covering works with a wide range of complexity and scale. Many of these folks start with fairly new, but not terribly expensive models (lots of Hot Wheels) and turn them into something more interesting and valuable. So here’s a question for all you customizers… What’s the oldest, most valuable, or rarest model you’ve torn apart, hacked into, or painted over to create something new? 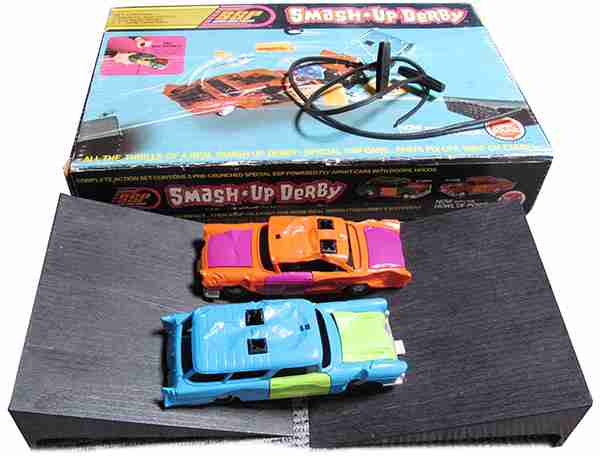 Full disclosure: I make no claim to be a great customizer, I just have a lot of fun doing this sort of thing. Here’s an example that I did recently. In the early 1970s, Kenner SSP cars were among the most popular toys on the planet, especially the Smash-Up Derby sets. The first and most common set pitted a 1957 Chevy Nomad wagon (blue with lime green fly-off parts) against a 1957 Ford Fairlane coupe (orange with magenta parts). These sets later came in other notable color combinations, but this is the best known version. 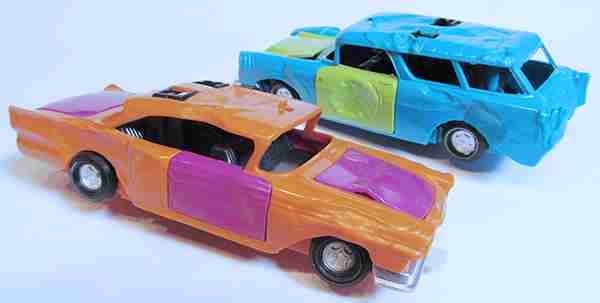 About a year ago, I thought it would be neat to make some different body styles out of these cars. I cut part of the roof off both cars and started swapping them around. The Nomad was the recipient of the Fairlane’s roofline, and with some further filling in (and a custom trunk piece), it became a Bel Air coupe, finished in taxi yellow and silver. 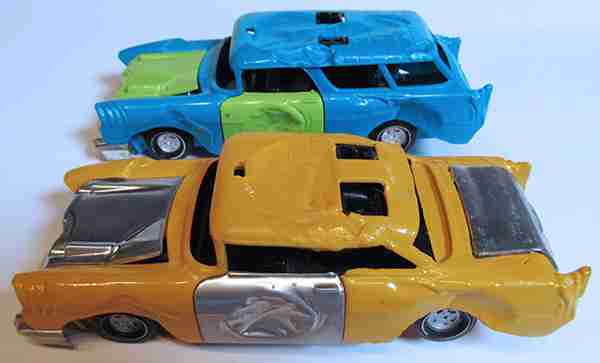 What was left of the Ford made a nice start for a Ranchero pick up. This one required more work than the other car, with more fabrication of parts, such as the bed cover and tailgate, as well as moving the gyro wheel mechanism forward about an inch from the original position. Additional detail parts such as the Ranchero’s blown engine and interior and rear bumper were cannibalized from other models as well. It was finished in bright pink with dark blue parts. In both cases, I chose colors that had never been used on these models before, another attempt to create something unique. 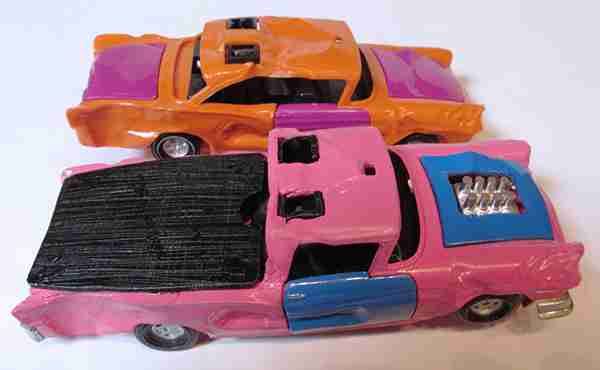 A Smash-Up Derby set retailed for about six or seven dollars back in 1970. Today, a mint or lightly played-with set of these cars, complete with ramps and other accessories might fetch $150 or more… there was even a Bicentennial version that sells for double that amount. If I had made these modifications when these were brand new toys, there wouldn’t be much of an uproar. These cars were designed for rough play, so they usually got damaged anyway. But considering the rise in values over 40-plus years, some folks were horrified that I customized them. Truth is, these were not nice, mint examples… they were already heavily battered, incomplete cars when I got them, so it was no great loss to modify them. The end result turned out pretty nice, I think. 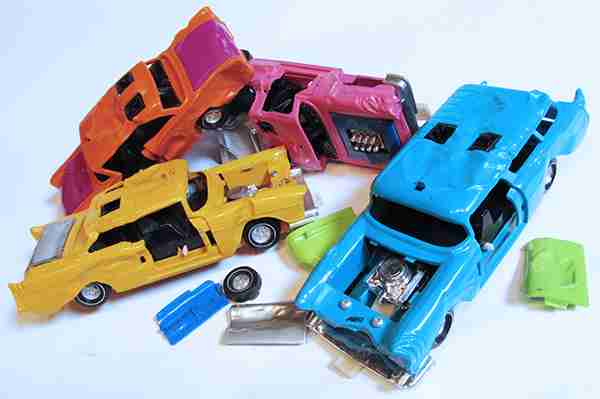 So I ask you again, customizers? What’s the oldest, rarest, or most valuable model you’ve torn apart, hacked into, or painted over to create something new? We want to do an article highlighting some of them, so tell your stories in the comments! And you can even upload pics now!

Here’s the Bicentennial cars if you’ve never seen them!