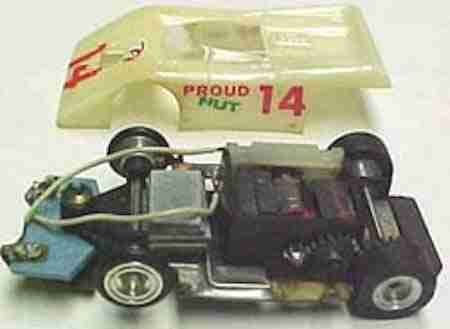 The diminutive car had an injected plastic Lancer McLaren chassis and guide similar to that of a TycoPro car, and a rubber magnet had been glued to the back of the chassis so as to allow for drifting. The body was mounted on a hinged mount and much lead weight was used to keep the nose down.

The Cox SuperScale cars were the the world’s First Magnet Traction Slot Cars available to purchase. About 300000 of them were produced and marketed mostly in racing sets from 1973 to 1977, and there were a total of 8 different bodies. The bodies were ultra-light styrene moldings, factory painted in correct colors. The original patterns were crafted by ex-Lancer and M.A.C. mold wizard Lloyd Asbury. The chassis was molded in glass-filled nylon and had a snap-in separated front end suspension, flat brass contact rails replacing conventional lead wires and an inline diode allowing either car to run on either lane of a two-lane track. A snap-in motor with automatic gear mesh, aluminum wheels with soft vinyl tires and a fixed pin-style guide blade were the other notable and unusual features. The guide retainer also locked the zinc plated floating steel pan in place. This pan was not used on the two Eagle and McLaren Indy cars.

Besides the Indy cars, there were a Bob Sharp Racing Datsun 240Z, a Brumos Porsche 911RSR and NASCAR K&K Insurance Chevelle and Penske Racing AMC Matador, plus a pair of Can-Am “fantasy” cars, a “Manta” and a “Torero” designed somewhat after the M.A.C. Porsche “917-30” favored by pro racers in 1973. 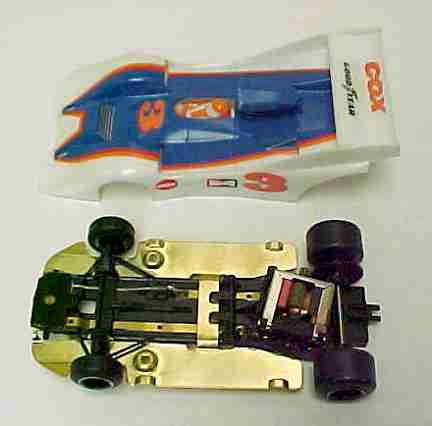 The Manta and its sister car, the Torero, used a novel chassis design with an added magnet set behind the rear axle, creating down force, the first production slot car in the world such equipped. Other features were a snap-in motor contacting stamped sheet brass lead wires and fixed gear mesh and a pin guide. The chassis material allowed the use of itself as bearing material for the rear axle while a floating front end was fitted with push-on independently rotating wheels.

The story began in May 1970 when Philippe de Lespinay, a young Spanish-born immigrant raised in France and other European countries landed a job at Innova Inc. a consulting company based in Playa del Rey, California. There, he was put in charge of a new program for the then-ailing Matchbox Company, to design a new HO scale racing set to compete with Aurora and Tyco. Beset by poor traction from the available rubber compound and inspired by the suction caused by motorized fans in the Chaparral 2J Can-Am car, he devised the idea of using a magnet to create down force over the tiny cars. While magnet traction had been used in model trains before (and full-size trains as early as the 1890’s), it was through direct contact of motorized steel wheels, not through ground effect, making this concept quite different in its function and purpose.

It worked splendidly and the program was sold to Matchbox, which promptly filed for bankruptcy and re-organization. Prototypes of this idler-gear, sidewinder car survived to this day.

After the demise of Matchbox, Philippe attempted to sell this new concept to several companies. First to Al Riggen for whom Philippe designed the well-known Riggen inline HO car, then to Hiram Johnson of Dynamic for which he penned an angle-winder HO car. Both these gentlemen refused to accept the idea, outraged by what they considered would “kill the hobby”.

In 1971, a picture of one of the prototypes was shown in Miniature Auto Racing, and in 1972, an article in Car Model showed a new application of magnet traction invented by Tom Bowman and fitted on a Bachmann HO car. This used “refrigerator” magnets. Tom and Philippe were apparently unaware of each other’s work, and Tom succeeded in selling his idea to Auto World, which marketed the concept and product as an add-on item beginning in 1973.

Meanwhile, Philippe had spent two years into establishing himself as a respected professional slot car racer, and had helped advancing the technology of both slot cars and controllers to the point where many controllers sold to this day still sport a frame he designed for Parma in 1972.

In early 1973, Philippe was hired by the Cox Hobbies Company to salvage the Eldon slot car program inherited from the Leisure Dynamics holding company. He did not waste much time in convincing Bruce Paton, then manager of the R&D department, to adopt the magnetic traction system for the updated vehicles. Thus, Cox introduced the world’s first production slot car with a separate traction magnet.

Aurora followed suit in 1975 with their “Magna-Traction” cars using the pancake motor’s own magnets, then issued the Super-G in 1976 with metal plates increasing the potency of the magnets to create greater down force. Today, most competitive HO-scale cars follow this principle. 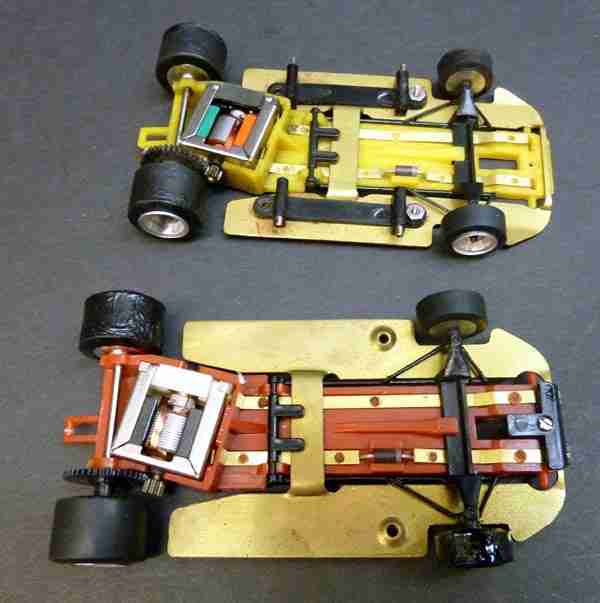 Interestingly, more recent TSR cars also designed by de Lespinay take a lot of their inspiration from these 38-year old cars, while adding improvements especially in the impact strength department, and reverting to a scale more acceptable to the average hobbyist. As in the TSR, the SuperScale uses a fixed gear mesh, taking the equation out of the hands of the occasionally clumsy hobbyist. This mesh was and still is today, the smoothest ever seen on any production slot car of any scale.

These cars were marketed in the USA and Canada but were issued at a time when the whole hobby was at an all-time low, and after about 150000 sets were produced over 4 years, Leisure Dynamics, then owners of the COX company, pulled the plug on the program as sales were no longer sufficient to justify continuing production.

It took much longer for the Euro designed 1/32 scale home-racing cars to adopt magnet traction. the earliest examples dating from the late 1970’s. Their design first followed that of the Cox Superscale bar magnet, but later, the Spanish designers discovered neodymium computer magnets and fitted the available small circular units in their models. However, this was quite inadequate and caused erratic handling as the magnets were too narrow and failed to offer the promised benefit as soon as the cars were pushed harder into corners. Over the last 10 years, most 1/32 and 1/24 production slot cars evolved and are now using magnet design and location closer and closer to the basic design of the bar magnet introduced by the Cox SuperScale car in 1973, and lately, several have also adopted the front magnet devised by Philippe for a car built for his wife and entered in a proxy race in October 2000. 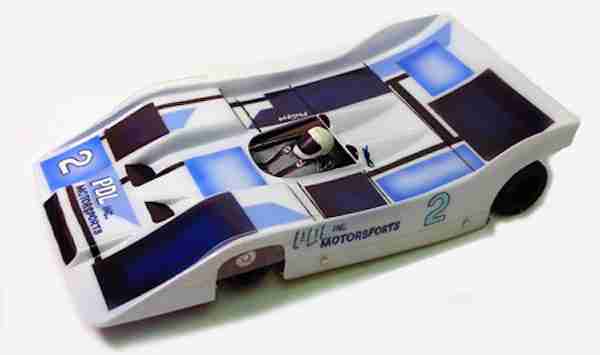 The M.A.C. Porsche 917-30 body is still used in retro racing today. At right, the Cox SuperScale bodies were the thinnest and lightest injected slot car bodies ever produced, lighter in fact than most HO shells! A “lay-down” driver was pushed in place on two small tabs molded into the body. A separate wing and engine dynamic scoop were fitted. In fact, the patterns for both were created by the same pattern maker, Lloyd Asbury, from designs by Philippe de Lespinay.