Anyone who’s collected model cars for any amount of time has become acquainted with the major diecast brands as well as some of the small-market, niche-oriented companies. There are a lot of older brands that have gone by the wayside, or have been bought and sold so many times you aren’t sure who they are anymore. Here are a few diecast oddities to add to your collection.

Jet Wheels was a company that made realistically proportioned 1:65 scale models with working suspension and opening hoods or other features. The earliest cars from the late 1960s were in fact made by AMT, (they called the series “Pups”) who then sold the business and the molds to Mego. The original range of 8 American street cars was augmented by a series of Formula 1 cars as well as some garage and track accessories. Some of these were later released under the Tuffy and Super Speedy names, but they eventually faded into history.. 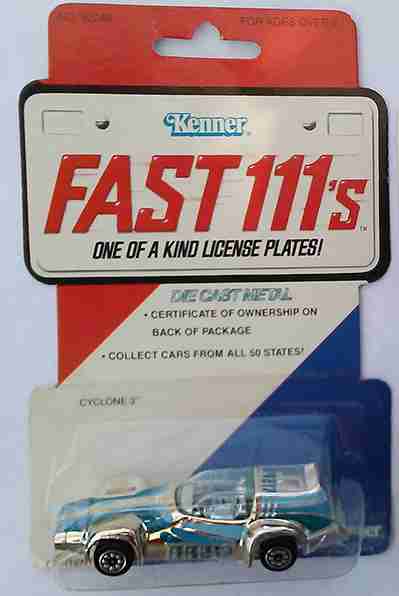 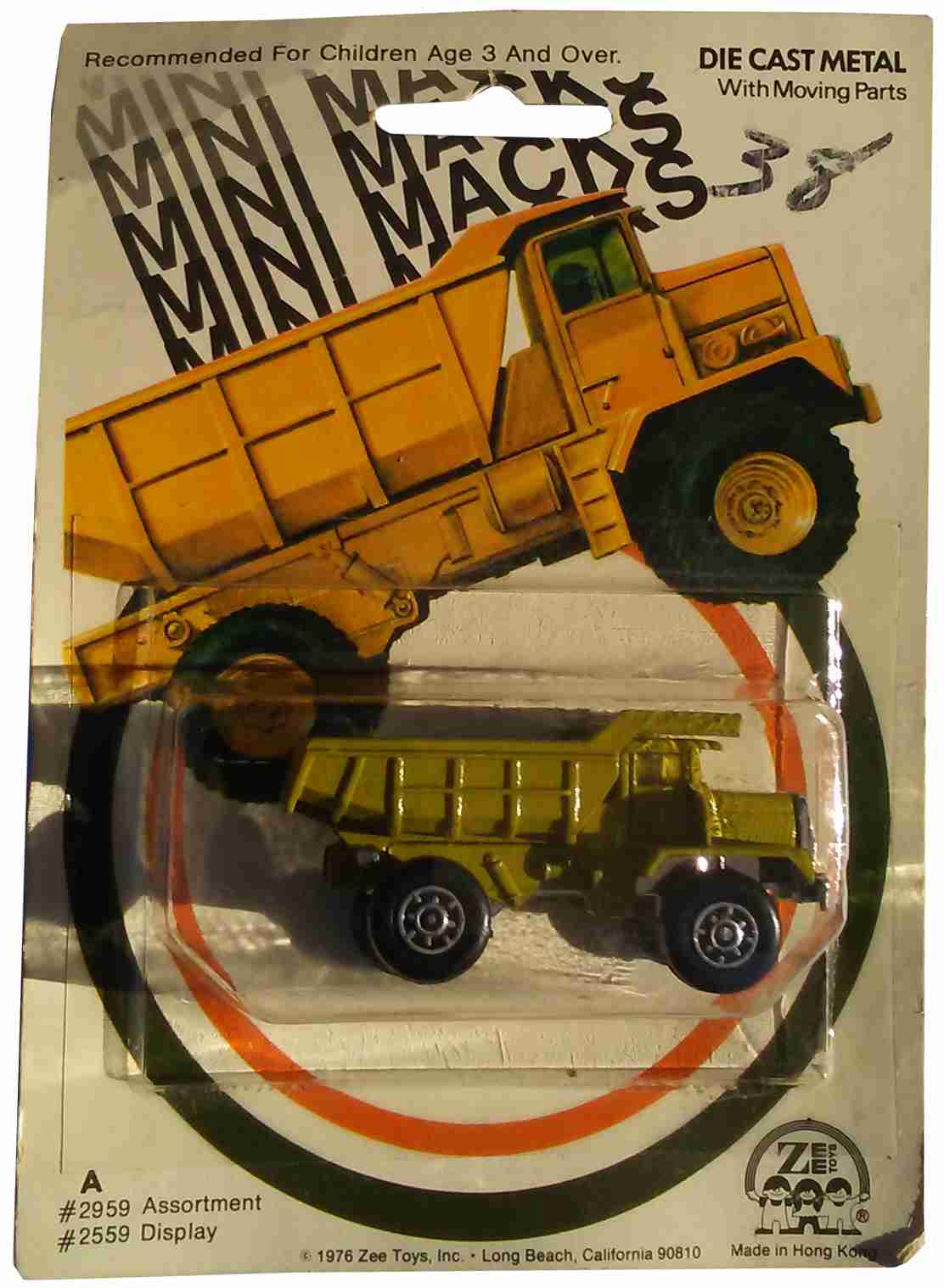 Kenner’s foray into 1:64 scale diecast only lasted a few years in the late 1970s, but they made some interesting cars. Some of them were souped-up models of production cars, while others were far-out fantasy rides. What tied them all together was the rear bumpers, which stuck out and angled upward so you could read the license plate. Each of these cars represented a different state, so the plates were kind of a big deal. The packaging also had a neat feature, a transferable “title” that was to filled out by the kid who bought it and then filled out again if it was traded or sold. Clean copies without writing on the back are somewhat rare these days.

This range of toys included a variety of construction equipment such as dump trucks, loaders, and tractors, not all of the Mack brand vehicles. This was one of several brands available from Zee Toys in the late 1970s. Detail is surprisingly vague, as they appear to be direct, unauthorized knockoffs of Matchbox cars from a few years earlier. With different wheels and the wording removed from the base, they just seem a bit “cheaper” than the originals.

Here’s another brand from Zee Toys, one that tried a little harder than Mini Macks. Detail is again pretty basic, especially the interiors, but at least they were trying by creating their own original molds. And they even made a model of the George Barris SuperVan, so that has to count for something, right? 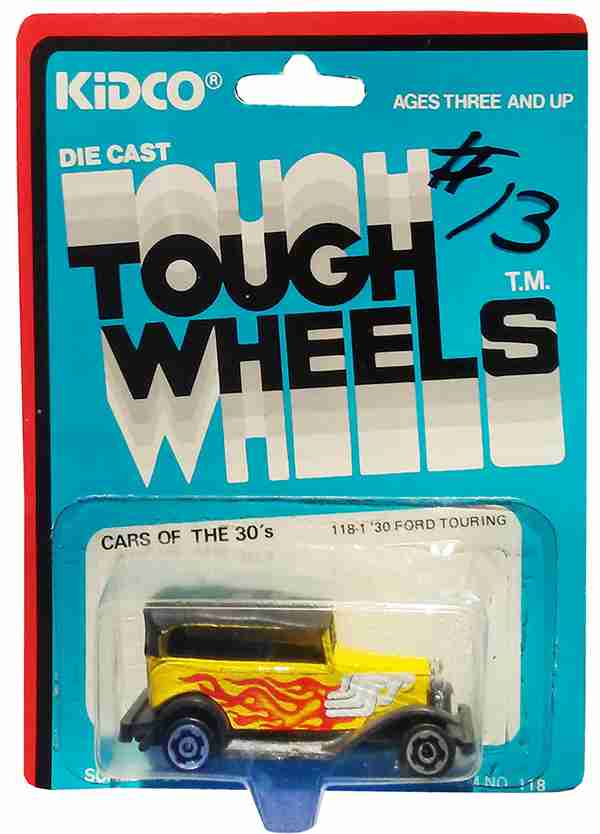 This was a brand of inexpensive, crudely detailed cars perfect for letting your kids play with in the sandbox. In a strange twist, instead of these cars being based on another well-known brand, the molds served as the basis for a revival of another popular brand. In the early 1980s, as Dinky was headed for bankruptcy, Kidco rebadged some of these cars under the Dinky name, a sad step down in quality. Despite the crude detail, Tough Wheels managed to score a few licensed properties such as M*A*S*H vehicles. 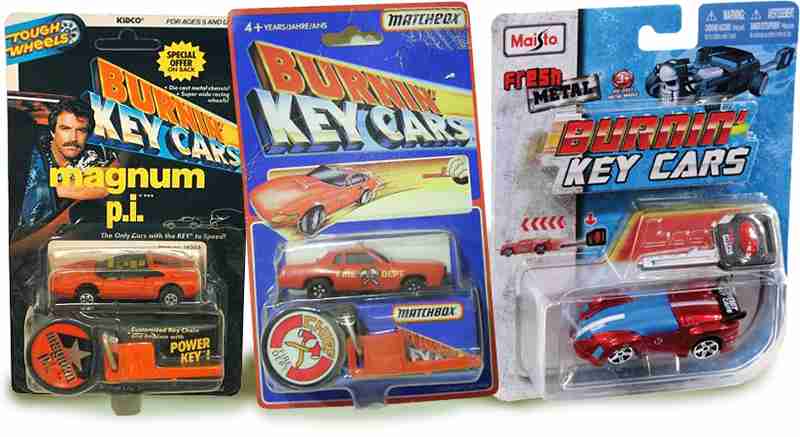 Then there were the Burnin’ Key Cars, a subset of Tough Wheels. These came with a very cool feature: a spring-wound motor that was activated by a slightly out of scale key. As with the Tough Wheels brand, they managed to finagle licensing deals with some popular TV shows, including Magnum P.I. and Knight Rider. For several years, the Burnin’ Wheels name lived on as a Matchbox brand and then again as part of Maisto. Each change of ownership brought vastly improved designs and packaging. 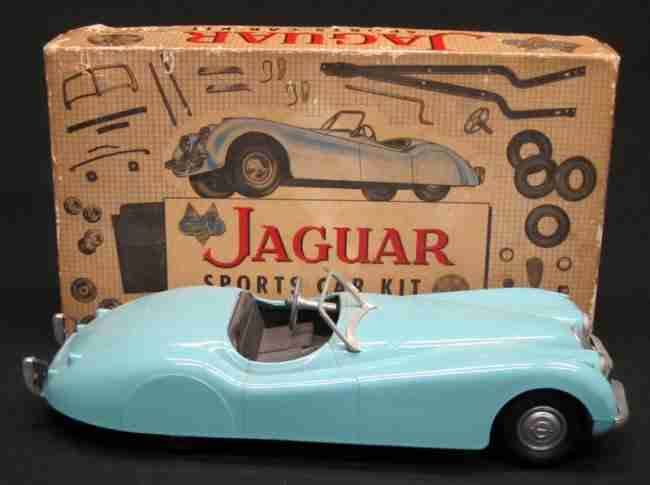 You may not recognize the name, but if you’re of a certain age, you should know their cars… Doepke started off as a family company in 1946 making military vehicles and other toys. The owner’s mother suggested they make some more peaceful toys, so they created some very large scale kits, about 1:12 scale, of a Jaguar XK120 and an MG TD… The bodies are made of thick diecast metal, while other parts were white metal, plastic or stamped steel. Both cars featured working steering and suspension. The MG was branded as the “MT” so they may not have had the rights to produce that particular model. While only available for a few years, these kits were huge sellers at the time.

Hard to say if these models were meant as a sincere tribute or something of an ironic joke. This division of Motor Max made models of Pintos, Gremlins, LeBaron wagons and such… not exactly the keys to real-life excitement. On the other hand, it’s been hard to find models of these cars if you did want them, and Fresh Cherries cars were nicely detailed with delicate luggage racks and other bits. They came in several scales including 1:24, 1:64 and 1:87, all in high quality packaging. They even did 1:16 radio controlled versions of some of these cars, and you have to admit that’s beyond awesome.

It’s understandable if you don’t recognize this brand… This German company made mostly promotional models of Trabants and Wartburgs and Moskviches that were given away not in cereal boxes, but in cases of beer! In fact, only a few of their models represented common Western European marques like Volkswagen or Jaguar. Some of their packaging evokes a strong Cold War era image, something you don’t see every day at any scale. 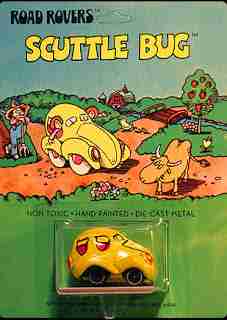 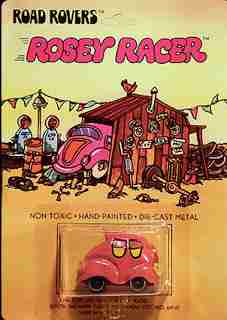 Wait, Hallmark? Like the card company? Yep! In the early 1970s, Hallmark introduced a series of overtly cartoony cars called Road Rovers, which looked almost like balloon creations. They were roughly the size of 1:64 scale cars, but because they are so oddly proportioned, scale is irrelevant here. The early cars were all metal and represented familiar vehicle types such as fire trucks or Volkswagen Beetles. After a decade hiatus, the brand was revived in the mid 1980s with plastic bases. The new line included reinterpretations of several of the originals plus designs that transformed objects such as vacuum cleaners or piggy banks into cars.

Thank you so much for this interesting look into diecast cars you don’t often come across nowadays. I enjoyed reading the articles and seeing pictures of these rarities.

Thanks for the comments! We’re working on a follow up article about more odd brands that will be published in the next week or two!

I like the mix of unusual brands you picked – big old stuff, older cheap 1/64,and newer Pintos and Barkas!