NOTE: THIS IS THE FINAL INSTALLMENT IN THIS SERIES. We want to thank Mr. de Lespinay for sharing his archives with us and hope you enjoyed reading these posts! You can see an index of previous entries here. 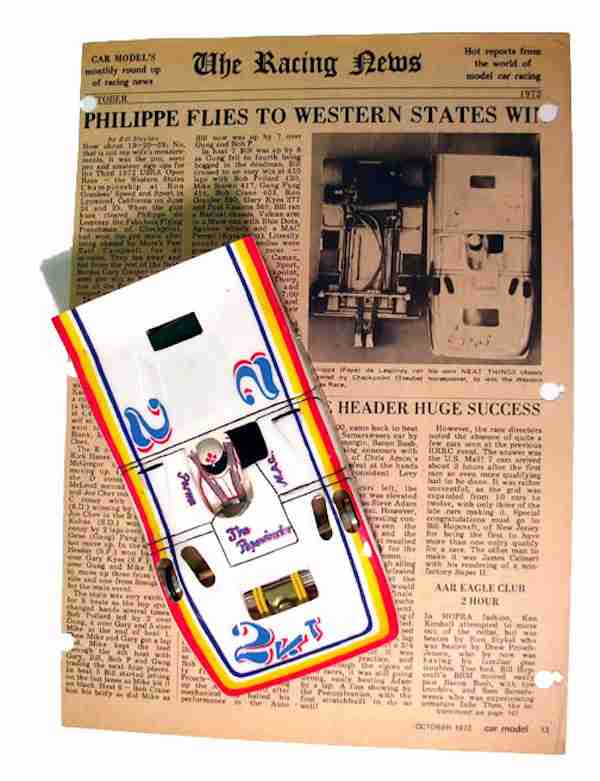 In 1970, I decided that it was time to leave Old Europe and go where opportunity appeared to smile to entrepreneurs. I packed my bags, took a one-way flight and landed in Maine. It was cold and damp, so I moved to California. After 6 months, I was right back racing slot cars, this time with the very heroes of the magazines…

I did OK, quickly thinking outside the envelope, designing my own stuff and eventually emerging on top by 1972, when I won the USRA Championship. By that time, my cars had become quite sophisticated and very fast, having set some world records in both speed and distance. Fortunately, I am a pack-rat so some examples survived, while I was able to find some that had gone away. Most have been now restored and are on display in an enthusiast museum in Los Angeles.

By 1972, pro-racing slot cars looked less and less like real cars and more like slot machines, strictly designed to go fast. But I always wanted my cars to look good too, as a form of respect for others as well as myself. So I had the bodies painted by expert earl Campbell, himself a world-record holder, and I painted the racing numbers and lettered them.

I am especially fond of this one, the 1972 car that won me my first of two “Western States Championships” that was restored with a replica body in 2006. The driver survived in another car and is now back in a replica of the original body painted by artist Jairus Watson in Oregon. The chassis and motor were restored, and new-old-stock parts were used throughout if missing. 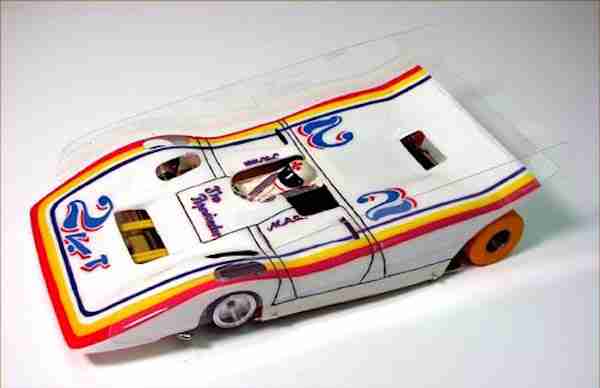 I built it in the spring of 1972 and used it in a couple of USRA warm-up races in the very competitive Southern California pro-racing scene, then apparently gave it to Team Mura’s Earl Campbell. I had already built him a sister car for the race set at “Speed & Sport” in Lynwood, California. He set fastest qualifying time and finished in second place in that race, the largest one that year in the United States. He used a very good motor built for him by Mura’s Bob Green, as well as one of the new M.A.C. Ferrari 612 bodies. With a nearly identical sister car fitted with a Team Checkpoint 24-1/2 single, I won that race and all the marbles by a mere lap. This is how I restored this grand old lady of a car, with the help of my friends Mike Steube, Bryan Warmack and Jairus Watson. 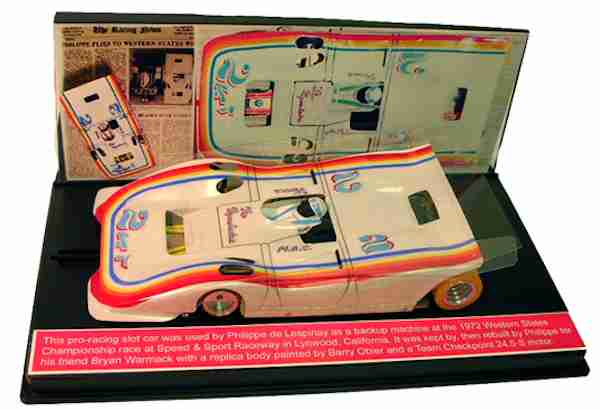 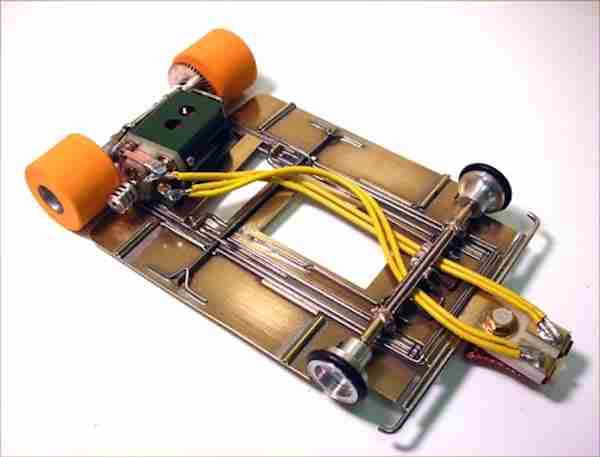 I had given a car to my friend Bryan Warmack in a trade, but it had the wrong bits, so I took it back from him and restored it as it originally was, the back-up car for the WS winning machine. The restored chassis is shown above. I made a nice little presentation display for Bryan from a Carrera slot car box and color copies of period documents.

Ron Granlee, then owner of the famed Speed & Sport raceway in Lynwood, CA, had used the car shown below in 1972. Ron was paralyzed and in a wheelchair, barely able to move one finger and slightly turn his head. Ron had asked me to build him a car for an important USRA race and I built two. Famed slot car artist Keiji Kanegawa painted the bodies, Bill Steube Sr. donated the motors, and I put the cars together. Ron qualified and did quite well, setting a new amateur record at 4.26″. 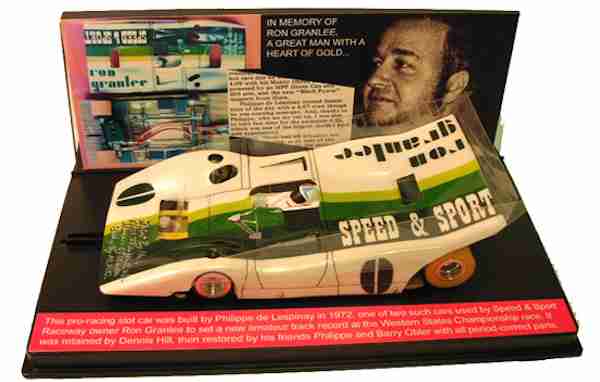 Unfortunately the car was quite damaged during the attempt, so Ron raced the other car in the actual main event. I retained one of the cars, while Ron kept the other and eventually my friend Dennis Hill ended up with it. I asked another friend, Barry Obler to paint a replica of the body and he did a great job. I simply had to add some lettering and black body lines, and paint the rear view mirror and its shadow as per the Keiji original. The chassis needed a lot of repair work and was somewhat rusty but I managed to save most of it. Fortunately and thanks to the few who have donated material to our museum, we had a correct S25 Steube armature and I built a motor from a used Mura C-can, in the style of how Bill would have done it then. 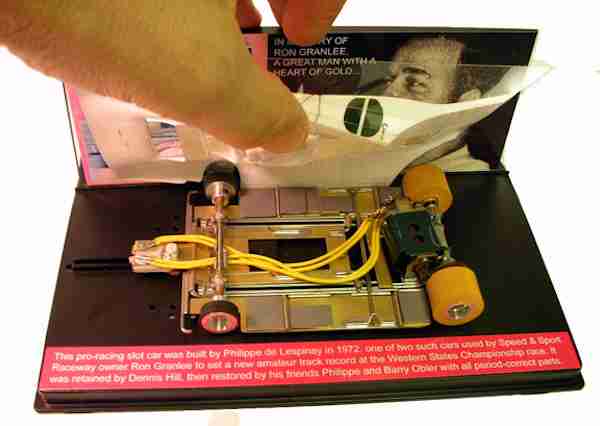 The car was then assembled, tested (it runs GREAT), and placed in a little showcase with a Photoshop compilation of a picture of the car taken in 1972, part of the very article Ron wrote for Miniature Auto Racing where he describes his qualifying, and a picture of Ron from “The Scale Competitor”, a rare one-issue newspaper published in 1973. We kept all this from Dennis Hill of course, so it was quite a surprise for him when I gave him the finished product, and he was crying like the proverbial water tap, which in fact was the intent. See, we LIKE to see Dennis being emotional because that is when he is at his best.