Hot Wheels recently released the Tour De Fast, which looks like a futuristic Citroen wagon (actually, many Citroens look futuristic, to be honest). What caught our attention was the pair of bikes on the roof. They’re not quite as detailed as the ones in the illustration, but you get the idea. 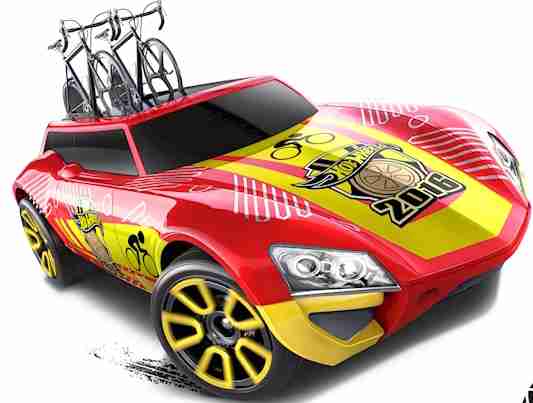 From the name and the load, it’s apparent that this is supposed to suggest a bike race support vehicle, which is really neat.  It’s an unusual load, but it’s not the first time a Hot Wheels car has carried a bike. In fact, there are many other Hot Wheels Vehicles that have carried other smaller modes of transportation. Such as… 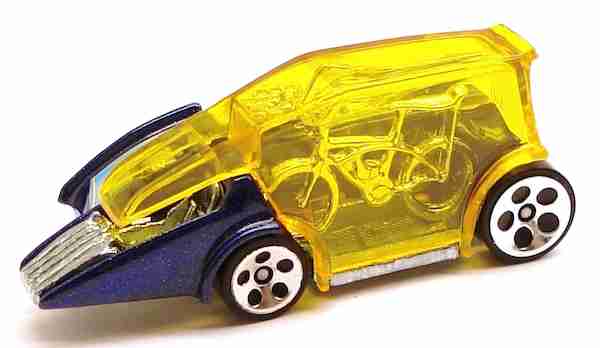 This asymmetrical buggy has a compartment holding what appears to be a Schwinn Sting-Ray bike under the transparent canopy. Pop on a set of vintage redline tires, and you could be convinced this was designed in the early 1970s. 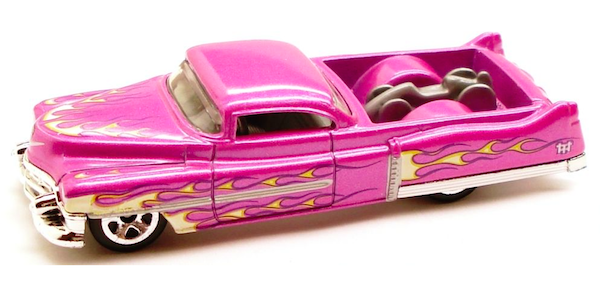 Everyone’s familiar with custom cocahbuilt Caddy hearses, but it was also common to make pickup versions as “flower cars” for the funeral procession. So imagine if you got your hands on a retired flower car… what would you do? Lower it, give it a custom paint job, and haul your soapbox derby car, of course, right?

You might not be aware of the cruiser motorcycle hidden in the back of this truck because it only came in the more valuable versions, which don’t get relased fron the blister very often. Early models of the ’55 Panel Wagon had a metal base and opening hatch, allowing the bike to slide out, but later versions with the plastic base have a sealed door and no payload.

Here’s a jacked up ’56 Ford pickup complete with a pair of dirt bikes in the back. Everything about this ride suggests “off-road adventure. Which way to Baja?

More recently, the Texas Drive’ Em captures the same effect as the Hi-Tail, but looks  capable of going even further off the beaten path before unleashing the motorcycles.

In the early 1980s, the Dodge Omni 024 was available in pickup form, which was a neat looking ride. Unfortunately, since it was front wheel drive, adding a three wheeled ATV in the back probably made it lose most of its traction. So this truck would be good for getting to the trail, but the trike would have to take it from there.

The Silverado is one of the great workhorses of the modern road. However if you chop and lower it, you can only take it so many places. This one is clearly not for off road use, as the motorcycle in the bed is a high speed ninja bike. 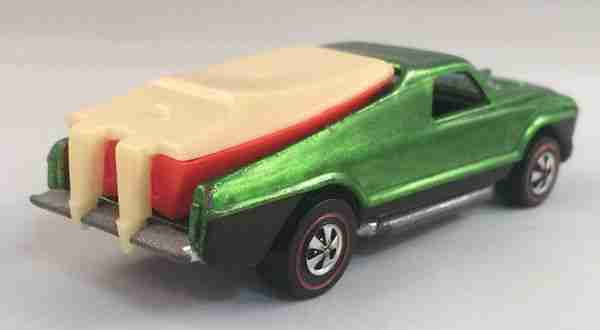 At first glance, the Seasider looks like a Custom Fleetside pickup with a camper top. In reality, it’s not at all the same truck, and the back end is actually a removable plastic boat. 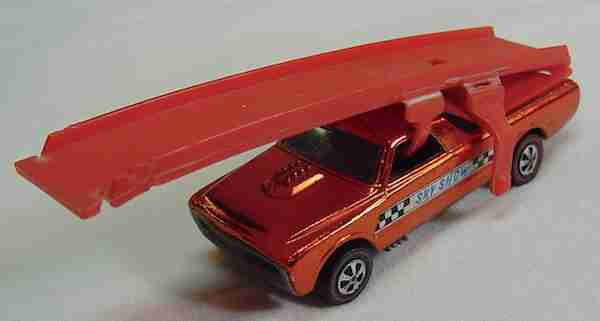 On the other hand, the Sky Show vehicle was the same as the original Fleetside, but had a snap on rack to hold a rubber band powered glider. Hot Wheels also offered a Deora based model in case you were more of a MOPAR fan. 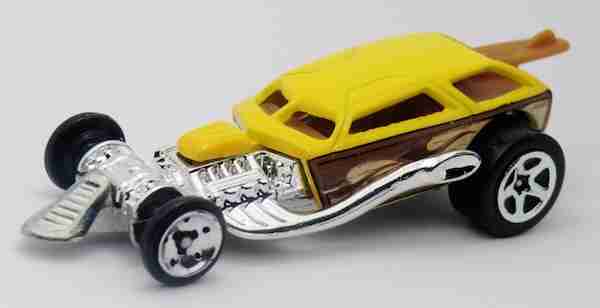 As an honorable mention, how ‘bout we call surfboards an alternate form of transportation? If we do, Hot Wheels has produced countless models of cars and trucks to carry them. Some had removable boards such as the Deora, and Beach Bomb, some were permanently mounted, including the Surf Crate, Some required snap-on racks like the ’40s Woodie, and some are molded into the body like the recent Corvair Greenbrier Wagon.

If you can think of other mainline vehicles that haul other vehicles, let us know in the comments below!

Nomadder What has a soapbox derby car in the back.
Volkswagen Caddy has a skateboard in the back.
Switch Back has surfboards on the earlier versions.

Excellent catches! The Jester pickup has some sort of small car in the back, but it’s not big enough for someone to ride in, so we we decided not to include it. Maybe it’s an RC car?

Aside from all of the surf board cladded castings, as a kid, I remember the Inside Story casting that looked like it was hauling a Formula Vee in the back.

Now that’s an obscure one! Nice find! Here’s a photo of it…

Here is the soap box derby car from inside the Onside Story casting.