Hot Wheels are usually easy enough to figure out that they don’t require instructions. It goes something like this…

1: Open Package.
2a: Scoot around on the floor or desk or table or sandbox whilst making engine noises.
2b: Or place on orange track for gravity assist.

But if you’re like many collectors, you never get through step 1, so you might not be aware of the not-so-obvious features of some Hot Wheels With Hidden Features. Or in some cases, it might look like the car has an opening/moving/removable feature, but how do you access it? Here are a few examples so you don’t have to rip your blisters open. 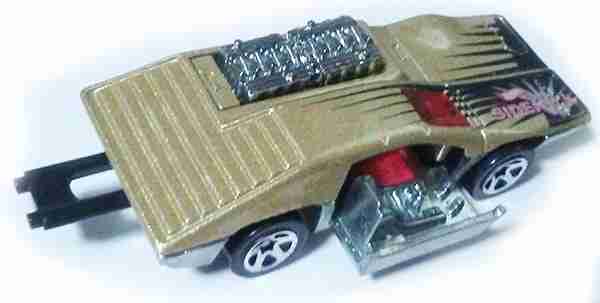 Side Kick – This is one of earliest examples of a car with a sort-of hidden feature. It was fairly obvious that the door opened, but how? Eventually kids figured out that by pulling on the tailpipes, the door and driver’s seat slid out to the side. 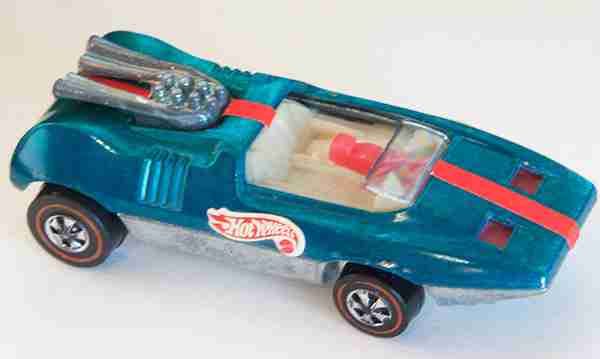 Peeping Bomb – There was something about those headlights that looked like they should move. Indeed, there was lever was in the cockpit that when slid forward made plastic shields cover the headlights. It was harder to spot on early models because the interior and switch were the same color. On some later models, they were different hues and more obvious.

By the way, both of these cars were available in a special promotion at Shell gas stations in the early 1970s. Were they chosen because of these fun features? Anyone remember getting these? 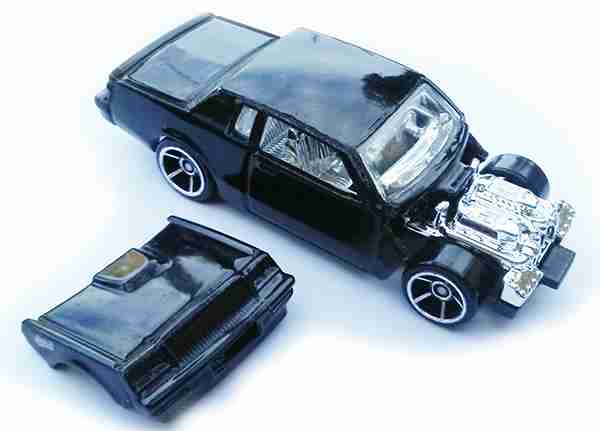 Buick Grand National – At first glance, it’s obvious the hood should open (the entire front clip, in fact.) But if you tried to lift the front edge, it didn’t budge. Unlike the real car, on which the hood was hinged at the cowl, the key here was to flip the assembly forward. Sneaky! Later versions lack this fun feature. If you never opened the blister, you might not have known about this.

Willys dragsters – Hot wheels has made at least FOUR castings representing early ‘40s Willys dragsters: the ’41 Willys Gasser for premium series, the Custom ’41 Willys Coupe for the mainline, the ‘41 Willys funny car, and the super skinny “Torpedoes” version of the funny car. It’s those last two we’re concerned with here… Both cars featured a long wheelie bar in the back, but in the blister, it was temporarily snapped under the chassis to make the car shorter in overall length. On some releases the base of the car and the wheelie bar were the same color and hard to spot.

Cars with removable bodies – Hot Wheels has made a number of cars with removable bodies over the years. Sure, anyone with a drill and a vise and a hammer can disassemble any car, but these were designed to be removable, just not very obviously so. In 2003, Hot Wheels released a series called Pop-Offs. The series name hints at this feature, of course, but if the first time you saw one of these was in a subsequent variant, you might not have noticed. The next four cars below originated in that series.

Volkswagen New Beetle Cup – A small lock under the chassis, in front of the rear bumper released the rear of the body, which could then flip off. Later models got rid of the opening feature, unfortunately. The roll cage could flip open as well.

Ground FX – This super sleek land speed car was part of the Pop-Offs Series. Again, later variants lacked the removable feature but made up for it with transparent and/or glow in the dark chassis bits. 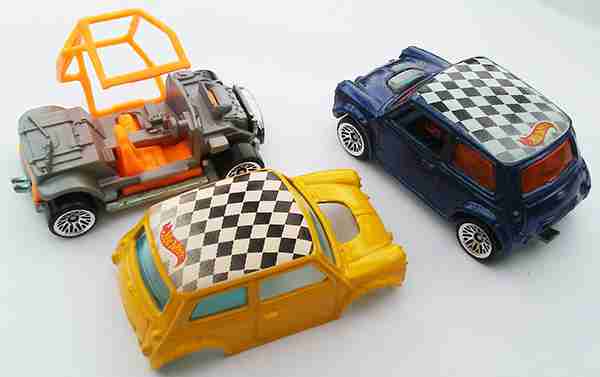 Mini Cooper/Morris Mini – We’re talking about the original Cooper, not the BMW Cooper. The mechanism works just like the VW Cup. The roll cage also snaps open, but it’s unclear if that’s a bonus feature or just part of the production design to minimize the number of parts. Either way, the interior came in several colors, so you could mix and match. It actually says “lock” and “unlock” in the base in case you didn’t notice it. Early models had metal bodies, later ones were plastic, and the roll cage disappeared eventually too.

Hyperliner  – Reminiscent of the Renault Espace super van, early versions of this model featured a removable body, again with a switch on the bottom of the chassis to unlock it. The power unit is massive to say the least, and you could argue that the chassis looks just as cool without the body. The later variants are sealed and likely don’t have the cool engine details. 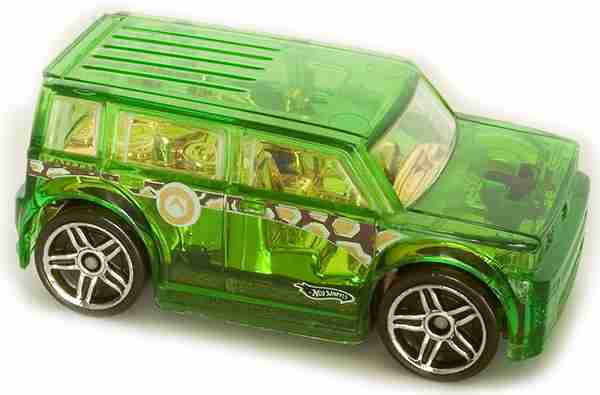 X-Raycers Scion xB – The transparent body on this “Xbox” came off, but no fancy levers were needed… you just sort of pulled on the rear bumper so the body cleared the metal tab that also serves as the license plate. 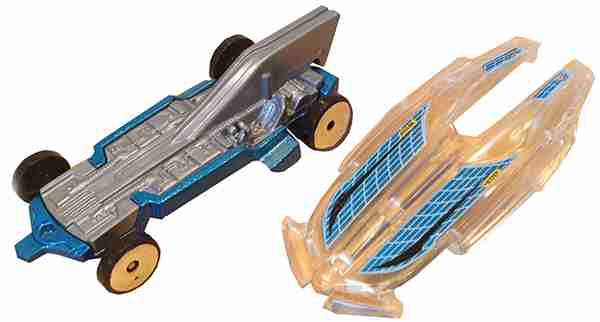 Formula Solar – At least we think this one is supposed to come apart. The body just snaps on to pegs front and back, so it can be removed pretty easily.

And as honorable mention, here are some that were really obvious. 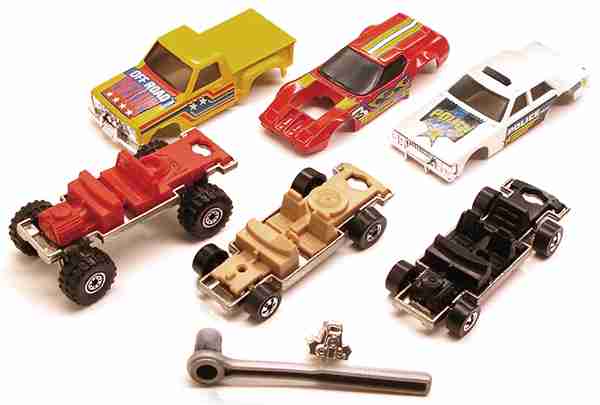 Body Swappers – These were the first Hot Whees with removable bodies, and they proudly displayed this fact on the package. What’s more, all three vehicles shared the same chassis dimensions, so you could mix and match for a total of nine different combinations. The body castings didn’t have names, but the set included a stepside pick up truck, a police car and a fantasy race car. The choice of chassis included a street car set up, a slightly jacked up race car, and a monster truck setup. Assembly and disassembly required a small socket wrench included in the package.

If you know of any other Hot Wheels with hidden features like these, let us know in the comments!

The early ’60s Chevy pickup had surf boards.  Also an obvious / not obvious feature is the dog in the back of the GTO Wagon – very much like the dog that was in back of the mid ’60s Matchbox Mercury Wagon.

Never noticed the dogs in the GTO… the MuttMobile from 1970 has a pair of hounds too!

Does anyone remember the nomad and corvette that you could jack up in the rear. The axle was on a plastic cube with 3 notches for different hights. I can’t find anything online about them. Is my memory fooling me?

They were the “Hi Raker” series cars, made in the early to mid 80s I believe.

thanks for sharing that,i didn’t know all of this.

now I will be watching for this on hotwheels.

Theres this car Called Night Burner Which made a Zazzo sound

i have that car

The 2015ish charger hellcat has a modeled hemi motor if you drill the rivets out and take the body. i found out while customizing

The Honda City Turbo has 3 Motocompo motorbikes inside. Cool reference to the real one 🙂

the 1934 Packard hot wheels has a hat and violin case molded into the back seat.

Theres a red Porsche from 2019 with a DR’s stethoscope in the back as a tribute to the designers Dr who owned a red Porsche of the model, there’s a details story as to y the tribute but I can’t remember it so do ur own research but a slightly disappointing note is they kept it in when doing the gold 2020 recolor removing the tribute factor to a wtf hidden detail

Are you talking about the 944?

Not hot wheels but lesney matchbox series no.6, the old red 69 model Ford pickup stepside,the front tires turn left and right and kinda has a camber to it much like the old twin I-beam suspension on the real McCoy.

I remember a Matchbox from the mid 70s called Fandango. It was a mid engined racer, I guess a supercar for that era, that had a turbine lying down above the rear wheels that spun when the car was rolled. I know the car was white, and to the best of my recollection, it had a red(?) interior.
Someone mentioned the Hi-Rakers series in an earlier post. I had a few of them; the ’40s Woodie, the Three Window ’34 and the Dodge D-50.

You can find them here (we got 9 Variations).

The Scion xB is “riveted” on at the front, so you might be able to snap it off to reveal what looks like a mini-moto on the back seat.

I remember the doors and hoods use to open back in the 70’s. Why has this stopped??

Production costs. That being said some models start seeing those features again, but only in the premium lines.