As the 2016 election nears its conclusion, it’s time for us at hobbyDB announce that we officially endorse… collecting political memorabilia!

Over the course of U.S. history, elections have resulted in a side industry that has created buttons, hats, posters, signs, bobbleheads, stickers… if it can promote a candidate, someone will make it. Some of them were created as giveaways, some as fundraisers, some as third party cash-ins. But however they came to be, election-related items can be an interesting batch. 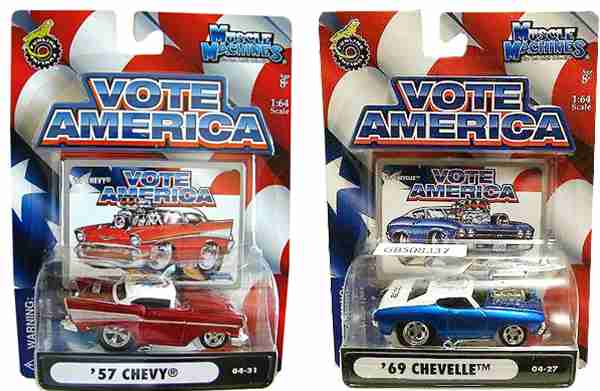 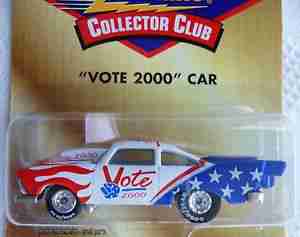 Diecast cars – Johnny Lightning produced some “Vote 2000” cars around election time that year, but stayed very noncommittal by adorning them with basic stars and stripes themes. In 2004, Muscle Machines created a series of very American hot rods including a ’69 Chevelle, ’57 Chevy and ’49 Mercury, each adorned with either Donkey or Elephant logos on the roof. What’s strange is they painted the Democratic cars red and the Republican cars blue, the opposite of the standard colors used by most news outlets these days to color electoral maps. 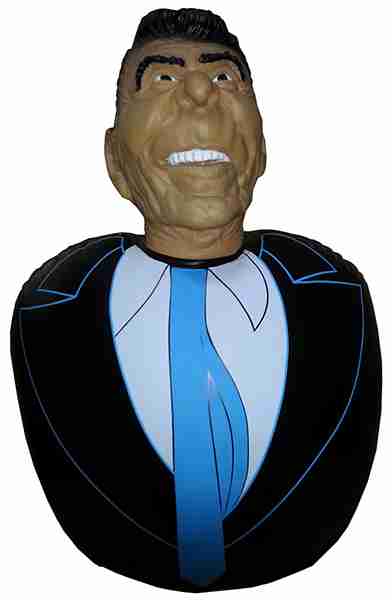 Inflatables – In 1984, voters could purchase this awesome life size inflatable Ronald Reagan caricature/figure. Based on the packaging, which simply called it an “Inflatable House Guest,” it was not authorized by Reagan, his party, or anyone involved in the election. There was a separate chamber in the bottom of the body that could be filled with water or sand to make him rock and stand like a Weebles figure. With that weighted bottom, the inflatable Gipper could be used as a pool float, a punching bag, or a passenger in your car to sneak through high-occupancy lanes. So essentially, the makers of this item didn’t care about your political leanings, as long as you voted for their toy In fact, the company also offered similar inflatables of Richard Nixon and Mikhail Gorbachev. 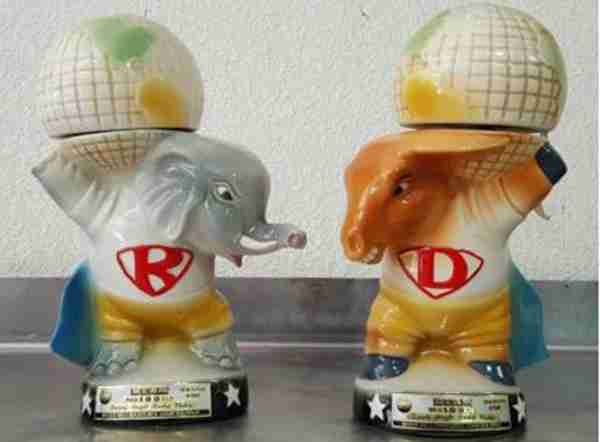 Decanters – Do elections sometimes make you want to hit the bottle? Jim Beam has had both sides of the aisle covered for years with their election decanters. For several years, the distillery designed a ceramic 750 ml bourbon bottles representing Democratic Donkeys and Republican Elephants. Unfortunately, there is no data on which party was more popular each time, or what consumption of whiskey actually meant in relation to actual likability of each candidate.

Pins and Buttons – These are among the oldest election memorabilia, and are often rare because of their easy to lose small size. Early items like this William Taft watch fob quickly gave way to simple pins and buttons that we have come to know in modern times. As they have become easier to produce, really specific buttons such as this Obama pin started to appear.

Hats –  The traditional porkpie hat with a candidate’s name wrapped around it started as a real straw hat, eventually giving way to plastic or styrofoam lids. Folks very rarely wore these in public, of course, except at rallies or conventions. In recent years, baseball style caps have become more prevalent. With the advent of inexpensive, quick embroidery processes, candidates can respond with their own hats in an instant. Since Halloween falls just before the presidential election, knock-off costume and parody hats are also produced in great quantities. 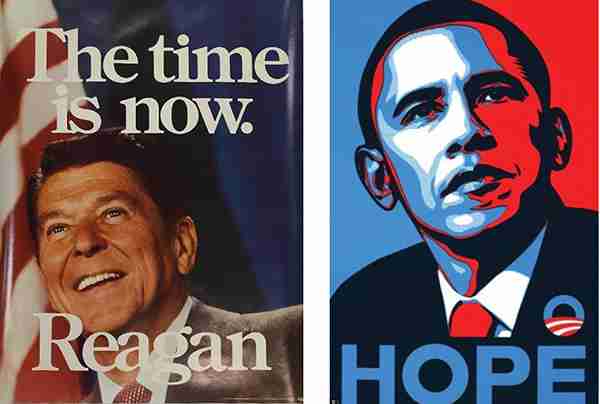 Posters and Signs – These were generally designed for single use, glued or stapled to a wall or telephone pole. Over the years, they started to become collectible enough that freshly preserved, rolled copies became more common. So if you went to college in 1980, your roommate may have had this iconic Reagan poster on the wall. Or, 28 years later, this famous Obama sign. 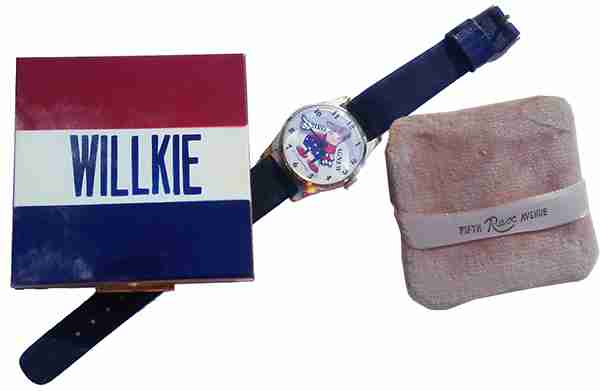 Jewelry and Other Bling – Some of these items can get a bit expensive to produce, so they can be kind of rare. Take, for instance, this Spiro Agnew wristwatch. He didn’t make it out of the primaries, so it’s quite rare. It appears to be based on a Mickey Mouse watch, by the way. Or one can assume Wendell Willkie was pursuing the women’s vote with this makeup compact and mirror.

Stickers and Decals – Bumper stickers became fairly prevalent starting in the 1950s and beyond. Since the average expectancy of owning a car before trading it in was fairly short back then, it was unlikely that someone would have more than one election cycle’s worth of stickers on their car. In later years, it has become more common to see four, eight or twelve year old stickers proudly proclaiming the driver’s allegiance. On a side note, these stickers (originals and reproductions) are sometimes seen on restored cars as a fun period correct detail, such as this sweet “McGovern/Shriver ’72” decal on a vintage Buick.

Bobbleheads and Other Figures – Bobble heads and nodders were generally pretty complimentary towards their respective candidates until marketing forces realized unflattering characterizations of the opponent could be a good fund raiser too. With the advent of 3D printing, models can be quickly produced to fit the news cycle, so more custom, up-to-the-minute models are available, including action figures and vinyl art toys. 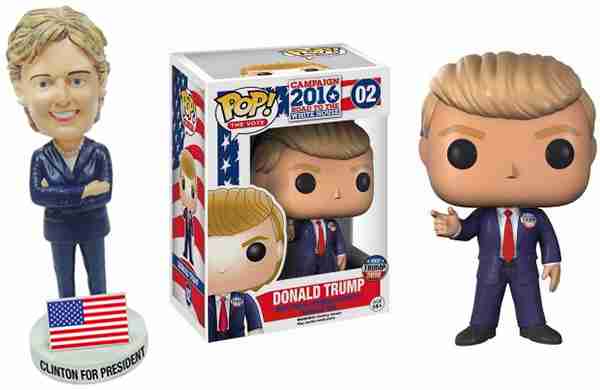 Magazines and Other Publications – Major periodicals such as “Time” or “Life” magazines from election years are highly collectible. The “TV Guide“ seen below is pretty cool because it included third party candidate John Anderson on the cover along with Jimmy Carter and Ronald Reagan. For those of you too young to remember, in 1980, Anderson was not invited to the main debates, but one channel ran the debates on tape delay and allowed him to respond before hitting play again.

The Chicago Daily Tribune famously printed a large number of “Dewey Defeats Truman” editions before realizing their mistake. An original of that would be worth a fortune today. Modern technology made such changes much quicker to implement, so in the the 2000 election, you might have seen “Gore Defeats Bush,” then “Bush Defeats Gore,” followed by “Now Just Hang on a Minute” editions of one paper in the span of a few hours.

Alfred E. Neuman, the spokesidoit for “Mad” Magazine, has launched a joke candidacy for every election since 1956. The humor has been relatively nonpartisan in that every candidate gets skewered at some point. Things almost turned very dark for Mad’s cover in 1968, however… if you look at the cover of October ’68 issue, Mr. Neuman is about to pop several balloons with the images of major primary candidates including himself. The original illustration had Robert F. Kennedy on one balloon, but his assassination came just before the magazine went to press. Mort Drucker, the cover artist, quickly modified the design to put Alfred in his place. For a magazine known for its bad taste, this was a classy move.

Ironically, collectibles such as these might be harder to come by in future elections. Social media such as Facebook and Twitter have become the popular choice for campaigns to get the word out to a large audience efficiently and flexibly. As a result, yard signs, bumper stickers, buttons, and other physical campaign items are already decreasing in use.

We hope you’ve enjoyed this look at political collectibles… We’ve done our best to be as neutral as possible here, so if you think we’re too biased towards one party or the other, you know what to do… Politley comment and add stuff to our database! And remember, no matter how you vote, you can’t spell collection with election (well, maybe you can, but who’s counting besides the folks at the ballot stations?)

Love the Goldwater!!  Maybe ’cause I’m a Chemical Engineer!