A Look at the Scary Side of Collecting

The macabre, the horror movies, the candy, the decorations, the candy, the costumes…oh, and the candy.  Just a few of the many reasons I look forward to Halloween every year, and why it’s been my favorite holiday since I was a kid donning my Ben Cooper Boba Fett costume.  (You know, those plastic costumes you couldn’t breathe in or see out of, but were worn by children everywhere). As an adult….ok, as a “big kid”…it’s always amazed me to see the variety and cult following of horror-related collectibles and toys.  You can find action figures and statues for virtually every pop culture franchise these days, but you can still find a few classic collectibles from the horror genre.  Here are some of my favorite Halloween-friendly collectible ideas… the Scary Side of Collecting! 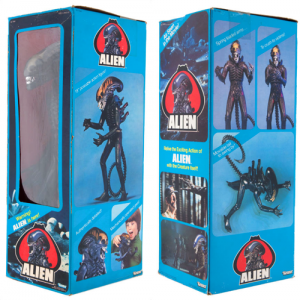 Its evil brains glow in the dark! When Kenner picked up the license for the 1979 Ridley Scott movie, Alien, they were hoping to be on track with the next big thing after Star Wars.  While the movie was undoubtedly a success, the film’s R-rating and graphic violence resulted in a very quick death for the toy line. While a line of 3 3/4″ figures was planned (and later reproduced by Funko & Super7), the only item to make it to production was this behemoth 18″ figure. Given that these are often found missing the dome, one of the five back spikes, or tail, and often with a broken set of retractable teeth, finding one of these complete and in nice condition can be difficult.  Gentle Giant later reproduced these in larger scale (24″ tall). 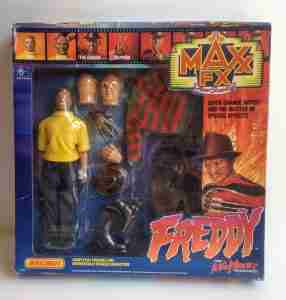 Kenner wasn’t the only company to have a toy from the Alien franchise planned, only to later ditch the concept.  In the late 80s, Matchbox was to include the Alien Warrior from the 1986 film, Aliens, in their MaxxFX line. These 9″ action figures were similar to Mego figures in style, and allowed the owner to dress up the character as one of multiple horror characters.  Several prototypes were developed for this line, but ultimately only Freddy Krueger was released. 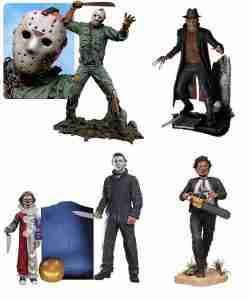 McFarlane Toys might have set the stage for horror figures coming to the mainstream with their Movie Maniacs line, but in 2005 NECA took it a step farther by introducing their Cult Classics line. Similar in style to the Movie Maniacs, these 7″ tall figures took small-scale collecting to a new level with their incredible sculpts, statuesque posing, and the diversity of the line. While the line featured many horror favorites such as Michael Myers, Freddy Krueger and Jason Voorhees, fans were also treated to debuts of figures such as Patrick Bateman from American Psycho, Frank the Bunny from Donnie Darko, and The Jigsaw Killer from Saw.   The line continued for a solid five years and gave us dozens of unique characters from the genre. 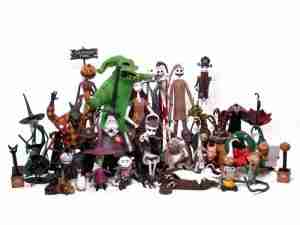 NECA The Nightmare Before Christmas

What Halloween would be complete without some of Tim Burton’s The Nightmare Before Christmas? In 2004, NECA launched a line of figures from the cult movie, and what is in my opinion one of the best action figure lines of all time (despite the occasional quality issues).  Over the course of five years, nearly every character from the movie saw release in this line, making it not only a fun set to complete, but also making for an amazing display.  (Note: the image shown is only part of the line!)  NECA even produced the Spiral Hill and the Snow Buggy Jack heisted from Christmas Land.  The only downside to this line is that it’s *sooooo* close to being complete, those of us who are completists will feel annoyed about the few missing characters.  (The band, Finklestein’s second creation, the tree with hanging skeletons, and the reaper…I believe these are the only characters not made.) 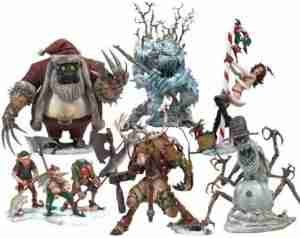 NECA has had many successful 6-7″ action figure lines, but along side them has always been McFarlane Toys, the company that sparked the highly-detailed figure lines in this size.  McFarlane is known for Spawn, various sports series, and their Movie Maniacs, but some of my favorites fall in the “Twisted” categories.  McFarlane has lent their horrifying takes to The Wizard of Oz, Christmas and general Fairy Tales, creating masterpieces in action figure form and inducing nightmares everywhere.  Some of this stuff is not for the faint of heart (like Humpty Dumpty), or oversexualized (like Mrs. Claus), or both (like Red Riding Hood), but these series add an extra degree of macabre to any collection. 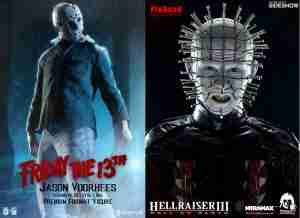 OK, so maybe the smaller figures aren’t really  your style.   Maybe you’re looking for something a bit larger to be the centerpiece(s) of your frightful collection.  That’s where a company like Sideshow Collectibles comes in.  Sideshow has made a name for themselves making top-notch large scale figures, having started with 1:6 scale action figures and moving into 1:4 and even larger.  Some of their early offerings included 1:6 scale versions of horror icons like Freddy, Leatherface and Jason, which then progressed into their mixed media 1:4 scale line, the Premium Format Figures.  These days, Sideshow is revisiting new versions of their classics with all new and improved sculpts and features. 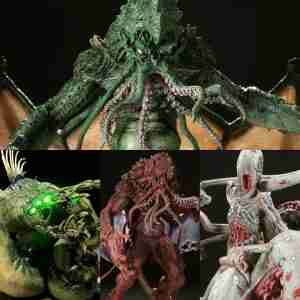 In my humble opinion, H.P. Lovecraft is the undisputed master of terror.  Writing well ahead of his time, Lovecraft let the imagination run wild with indescribably horrific creatures in other-worldly settings, creating horror that to this day remains some of the best of all time.  Many have tried to capture the spirit of the creatures of Lovecraftian lore, but few have been as successful in doing so as SOTA Toys.  In 2010-2011, SOTA released statues of Cthulhu, Dagon, and Nyarlathotep, each measuring over a foot tall, with insanely good detailing and paint.  While these retailed in the $200 range, they generally go for at least twice that now, when and if they become available.

OK, maybe you love horror, but the blood and guts or a two-foot tall machete-wielding murderer isn’t the best decor for your home.  Or maybe having a large statue of the Master of R’lyeh is enough to give Grandma a heart attack when she visits.  If so, then Funko has some much more tame, adorable options for you.  Unless you’ve been living under a rock over the last few years, you’ve no doubt seen or heard of Funko’s Pop Vinyl figures. This collection of cute, stylized 3 3/4″ tall figures includes everything from My Little Pony to A Clockwork Orange, including a wide variety of your favorite horror characters. The beautiful thing about these – they’re small, inexpensive (with a $10 price point) and won’t result in the neighbors running from your house screaming.  If the Pop Vinyl isn’t enough, Funko also makes retro style ReAction Figures, blind box mystery figures, and even various forms of plush.

No matter your taste or budget, there’s always something out there for those of us with the horror gene.  Tell us about your favorite horror collectibles in the comments!

Nice! I suggest the Predator and Aliens Franchise if you want to start on collecting horror movie Action figures. Not only are they well made but the details on them surely are amazing! The packaging too is so cool that you’d want to display them in their original boxes. I got the Alien Queen recently from https://largerthanlifetoys.com/collections/horror-action-figures and I’m excited to put it up in the toy display cabinet!