Studebaker Coupe Gets Nose Job to Look Like Tucker Torpedo

Over the past two years, we’ve contributed articles to Die CastX magazine for publication on their website and in their quarterly print edition. We hope you enjoy reading about the back story of a couple of older Tucker and Studebaker diecast models.

Hollywood Stunt Double Gets Nose Job to Look Like Movie Star! Well, kind of. But now that we have your attention, read on.

The movie “Tucker: The Man and His Dream” is one of the more fascinating car movies that doesn’t involve racing or chasing. Only 51 copies of the Tucker Torpedo were made before Preston Tucker’s company went under, so director Francis Ford Coppola used his own Tucker and borrowed as many as he could from other owners, promising to take great care of them. 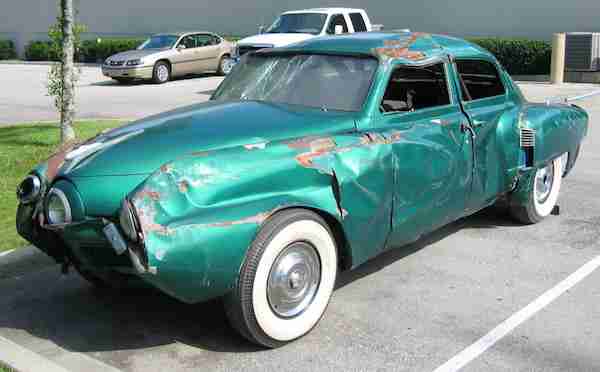 But in one scene, a Tucker crashes and rolls over on a test track. If this film were made today, the crash scene would be simple to create in CGI, and filmmakers could wreck as many pixelated Tuckers as they wanted. But in 1988, when the film was made, that wasn’t an option. Neither was wrecking an actual Tucker.

So a 1950 Studebaker sedan was called in as a stunt double. With its similarly shaped bullet nose, suicide rear doors and fender bulges, the Stude was a good candidate for a little plastic surgery (sheet metal surgery?) up front and a nip/tuck to create the fastback rear end. No modifications were made to move the engine from front to rear, so the scene had to be carefully edited to prevent the undercarriage from showing too much. 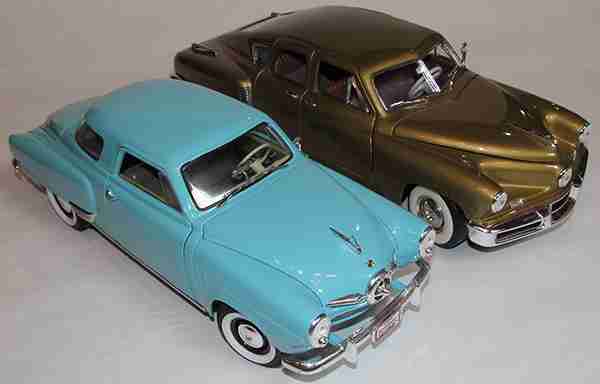 If you wanted to make your own 1:18 scale version of the “Stucker,” Road Signatures has you covered. The Tucker was available as a basic version and a super-detailed limited edition, shown here. The rear mounted V-8 features extra paint detail with orange header covers and manifolds as well as additional chrome and silver bits. The car also includes four opening doors and trunk (it’s up front, remember) with luggage and a spare tire. Chassis details looks sparse at first, but remember, as a rear engine, rear drive car, there was no drive shaft to model.

As for the Studebaker, Road Signatures offered a 1950 Starliner coupe, which shared the front end with the sedan but looked completely different from the back. The model captures the complex curves of the car accurately. There’s not much detail under the hood, because the inline 6 takes up very little space. The trunk opens to reveal spare tire, and the sparse interior has good detail where needed. As you can see, the Studebaker required not only a nose job but a butt lift too.

A close look at the real stunt car shows it was crudely assembled, as it was only meant to be seen at a distance and at speed, so precision isn’t required in recreating it. Plus, it was also wrecked, which gives you even more latitude to make yours messy. 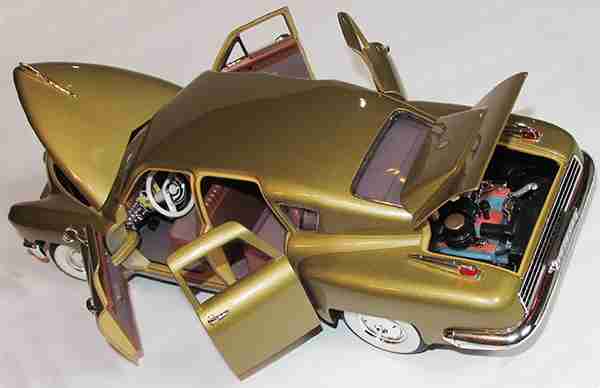 If you want too the real one, there are three at the AACA Museum: http://www.aacamuseum.org/tucker-automobiles-cammack-collection/ .

Brooklin even made 1/43 white metal copies of them:  https://www.hobbydb.com/subjects/the-cammack-collection-series

If you want too the real one? Doesn’t make any sense.

I assume it was meant to say “to see the real one”.

Ha ha – my bad typing catches up with me 4 years later!