More Odd Brands From the Island of Forgotten Toy Cars

A few weeks ago, we shared a list of unusual car brands with strange histories. The response we got was terrific, so here’s another batch model and toy cars you may have forgotten if you ever heard of them at all. All in all, these models come from seven different countries if you’re counting! These models from the Island of Forgotten Toy Cars are even more obscure than the last batch!

There’s something familiar about Muky model cars, even if you’re not at all familiar with the brand… Many of their models bear a (ahem) strong resemblance to various Hot Wheels offerings. These cars were obvious knock-offs from Argentina, but the mold and decoration quality suggests a copy of a copy of the original. Or were they? Some Hot Wheels historians believe the molds were sold to this company, and that Mattel no longer owns them.

Approximately 1:43 scale, these models are molded in bright, soft plastic with oversized wheels and cartoonish proportions. The design and materials of these cars resemble the rubbery plastic cars of the ’50s, but they are much newer than that. This Swedish company began in the mid ’60s and has produced much more recent models including late 1980s Volvos (did we mention they’re Swedish?)

Why settle for Matchbox when you can have Best Box? This Dutch company designed them to be cheap competitors to the 1960s Matchbox offerings, but these less detailed cars didn’t make the leap into Superfast territory. The brand was later renamed into Efsi and the molds are now owned by Holland-Oto but are not in production anymore.

What. The. Truck? This very strange series of models inspired by Japanese anime includes some really weird mashups of overly cute animals and cars/trucks/buses. The series also features some almost but not quite realistic models, which seem out of place at first. These other cars are based on illustrations from the Initial D comics and cartoons, so they actually fit in.

The scale on these cars is hard to pin down… from the side, they are slightly larger than a Micro Machines car, but as you turn towards the front, they are about twice as wide as they should be. The effect can be sort of dizzying.

These plastic 1/87 scale cars from Spain are ideal for a model railroad but might need a little work to fit in. The detail is very basic, and they had a tendency to melt and warp over the years. Still, these represent some fairly unusual models, so improving them might be worth it. Or you could try to find the Eko versions of these cars… This better-known company bought the molds in the mid-60s and continued to produce some of them using better materials.

This company made numerous dealer promo cars in the 1960s for marques such as Rambler, Studebaker and DeSoto, as well as ambulances and hearses. The molds were only in use for one year as promos, but someone at Jo-Han had the brilliant idea of re-releasing many of them as kits, an idea for which we should all be grateful. The original castings were usually curbside models with no opening features, so the kits often were modified to include underhood detail and sometimes custom options or even working steering. Jo-Han kits enjoyed a resurgence in the 1980s and were most recently produced sometime around 2013.

Sabra was a model car company from Israel that produced some very nice models of mostly American cars from the late ’60s through the early ‘70s. The full name of this line, “Gamda Koor Sabra,” translates roughly to “Israeli-born midget toys.” Given the ongoing state of conflict in the area, their model of a 1964 Chevelle station wagon in United Nations livery seems appropriate.

Like many other companies in the immediate post WWII era, A&E Tool And Gage Company found themselves scrambling to keep their machines running after their military products were no longer needed. As mold makers for Structo Toys, who made 1:12 and other large scale vehicles, they decided to apply the same technology to a smaller scale around 1:64 or so. Since the bodies were created with a simple two part mold, detail was seriously compromised, but in a way that’s actually kind of charming and fun. Many of their vehicles featured full wheel skirts which made production easier, and gave them a sort of futuristic look. 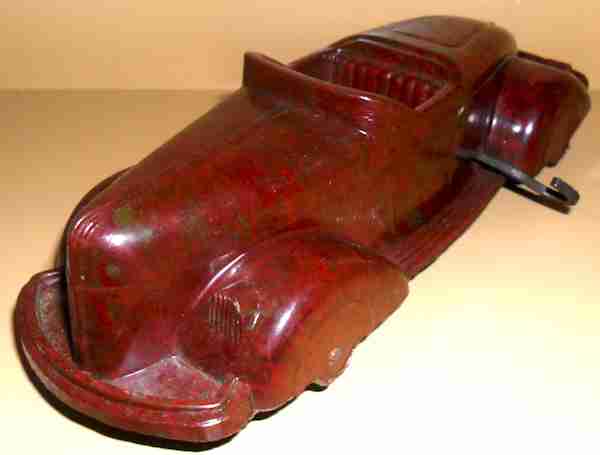 These were similar in construction to the Midgetoys, right down to the hidden wheels. Made in the 1930s, the designs were not based on any specific models and the brand is largely forgotten. But seriously, when’s the last time you saw a Bakelite model sports car with a clockwork motor?

Sabra – Just reading the Sep 2016 issue of Model Collector.  great article on Gamda there!  Gamda means Midget,  Koor is a large Israeli company (and still is), and Sabra is slang for an Israeli Jew born on Israeli territory.  Gamda Toys (1962-1966) was the original company before the jv with Koor.

Midgetoy – I met the brothers in the early 1990s in Chicago.  They were selling their old stock off in the fancy wooden boxes as well as single toys.  Their story is here: http://www.esnarf.com/MTstory.htm  AND clippings here: http://history.rockfordpubliclibrary.org/localhistory/?tag=midgetoy