Matthew is a writer and member of the Data Team at hobbyDB, where he enjoys blogging about the random things he collects.

My name is Matthew, I’m new to hobbyDB, and I’m addicted to stories. All at once you say, Hi Matthew. I’m also a fan of remixes of songs and the like, how other artists tweak (and hopefully improve) the work of another. As a writer, this is mostly taboo, though ideas, symbols, etc. are inevitably repeated, so maybe that’s the draw for me to movie posters for US films reworked in other countries for other audiences. That and, since the plaster walls in my 1940s apartment are a drab white, painted and repainted over decades into a faint pantomime of past tenants, I’ve taken to papering my walls with movie posters to liven the place up a bit. I bought the posters near my Denver apartment from a local posters dealer who has since retired after decades in the business, who responded to my obscure requests with an aged, knowing nod, his store such a staple I doubt it had a name.

Obviously I was guided by my personal taste in movies, but I wasn’t looking for my favorite films—not necessarily. I instead kept an  eye out for alternate art, foreign interpretations, or quirky winks to cult films.

I’m a big fan of the Austin, Texas, based Mondo, who creates reimagined posters for classics like Star Wars, Nightmare on Elm Street, and The Fly. They’ve also released a version of the Poltergeist soundtrack complete with glow in the dark LPs. Since the few hundred posters Mondo prints each release would sell out in a matter of minutes, a hunger to have them would pang each time I missed out. This was over a period of years when I lived in Austin. I never landed a one.

Cut to Denver and imagine my excitement when I realized how close I lived to this dusty poster shop. I gradually cloaked my walls with the likes of Metropolis and Dick Tracy, but my first, best find I happened upon in a shadowy corner, buried under countless slasher flicks and Brendan Fraser flops—an Italian version of David Lynch’s Blue Velvet: 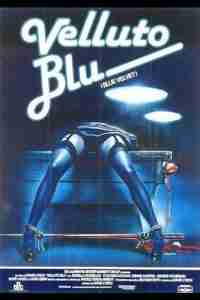 That no one in the film is tied down to a pool table in the film (spoiler alert?) misses the point—though the mad Frank Booth, played by a wide-eyed Dennis Hopper, would certainly jump at the chance—the evocation is true. After watching this David Lynch classic post-purchase, I nodded in recognition of the image’s insinuation of a violent underworld lurking within the shadows of suburbia.(Rumor has it the scene was shot, though.) The vision is both there and not there, serving as a poetic expression of the darkness that props up the film.

This poster was my first foray into international visions of American films, of frights and oddities I’d grown up with given a new, exotic life. Perhaps, too, the international nature of an American film poster bolsters that film’s resonance, increases its draw. In my mind, these are the best posters, and I’ve found the most expressive of them come out of Poland and Japan.

Consider this 1973 Japanese poster for The Exorcist: 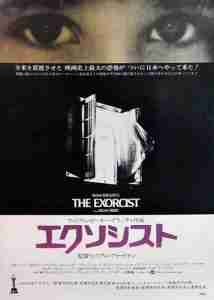 Here, the juxtaposition of two disparate images converge to insinuate the horror awaiting in The Exorcist: a child’s eyes; a window thrust open, curtain and all. A similar sort of thematic expression occurs here as with the Blue Velvet poster, assuming we read it top to bottom: innocence, then calamity. The main thrust of The Exorcist in a mere two images. Bare but effective, the images leave much to the imagination. Go ahead and fill in the rest. I dare you.

This poster has some ties to the original, too, wherein the priest, a shadow stopped short at the lot’s edge, stares into a beam of light cast from that same window wondering what’s in store. 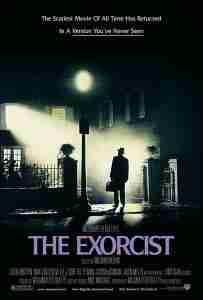 The Japanese poster, on the other hand, thrusts the viewer into the terror that awaits Linda Blair’s Regan. Different perspectives, different effects, both true.

Another classic that drops innocence into the heart of horror is Poltergeist. The original US poster shows, like The Exorcist, the main character’s back as she faces the nightmare. Eyes being one of our most expressive features, its no wonder I was struck by the Japanese version of the poster, which features young Heather O’Rourke’s Carol cowered in fear behind a pink blanket: 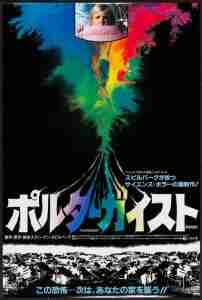 As with The Exorcist, a child’s eyes; innocence in the midst of a Technicolor terror suspended above a black and white town. This isn’t Pleasantville, folks, this is bad news. The poor kid is alone in the nightmare in which she disappears for nearly the entire film. Curious that Carol is rarely in the film, trapped as she is, yet here she is, featured on both posters. 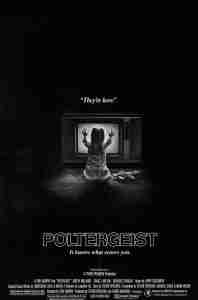 Perhaps this is what draws me to Japanese posters—these two anyway—that there is a confrontation with the conflict, but a confrontation that both embodies and implies the chaos that’s in store for these characters.

You tell me which is more effective: staring at a silhouette or looking fear in the eye?

From two eyes to a single word—a Polish word, mind you—Ptaki, or Birds, that curious Alfred Hitchcock film that sends everyone in Bodega Bay running from skies blackened and writhing with birds gone mad, murderous. 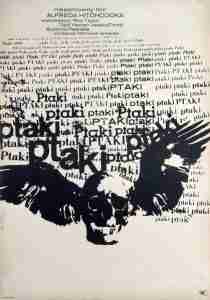 From the top, the words are small and somewhat uniform, but slowly they grow wicked and out of place, crooked and irregular in a crush that peaks—a transformation made from merely falling from the sky—into a metaphor for chaos, death from above. Read liberally, that last sentence could be a description of the poster or a synopsis of the film.

The Birds US movie poster depicts a woman under attack. The image in the Polish poster is more overt in that, rather than watching someone, the birds are headed for you. In this sense, the effect is similar to that of the Japanese posters, though much more dependent on symbols. 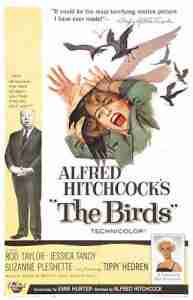 In my experience, this heavy symbolism is typical of Polish iterations of American film posters.

Birds is essentially a monster movie, though the monster is as many as it is relentless. How then would the Poles handle one of America’s most iconic monsters, Alien? 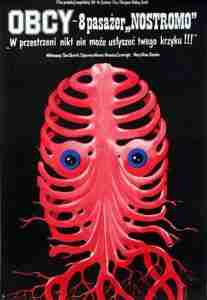 The birth of the Alien franchise goes hand-in-hand with the birth of film’s first Xenomorph, a monster that burrows inside chests and waits. So, too, in this poster, a monstrous gaze, empty and endless, biding its time until dinner. In this sense, man and alien are forever intertwined like a knot of veins, and so the threat at the heart of the film (and franchise): to be claimed. Birth through death from an unwilling parent, something this poster captures: where is the monster? Hidden. Hidden where? In you. The red rib cage staring back symbolizes the terrible unity at the center of every Alien film.

Each of these posters have surprising range and depth given their relative simplicity. Expressive eyes, the repetition of a word. They offer new entry points and interesting revisions to experiences I thought I knew well. The posters themselves are works of art that can (and should) be considered on their own while also serving as an homage to classic film experiences.

Are they expressive of a culture? Sure. Not necessarily of Polish or Japanese culture, but the cult of the film, the way a film can burrow inside you for years until you come across a dust-covered foreign poster in some decrepit shop on its last legs and you feel something in your chest start to lurch.