When Citroen first unveiled the DS in 1955, the design was impossible to ignore. The shape was beyond the scope of anything ever seen before, with its low slung, swoopy lines. Toss in the adjustable hydraulic suspension, and the future was right there on display. Not everyone loved the design, of course, but indifference was impossible. Spoiler alert: history has judged this design kindly, with the DS universally regarded as the perfect blend of the strange and the beautiful.

Toss in a shooting break version as well as a limited production coachbuilt convertible, and you had a useful variety body types for this strange contraption. 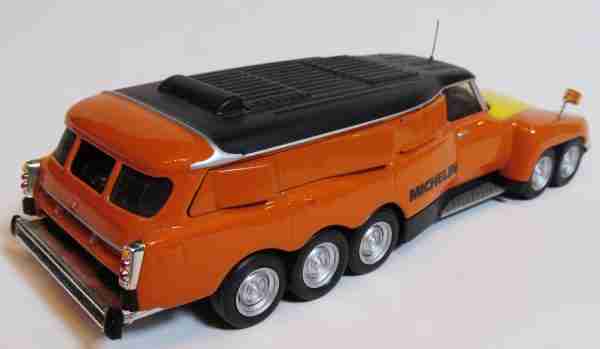 But there was at least one company that couldn’t leave the DS alone and made a few alterations. Meet the Michelin Milles Pattes Tyre Tester. Mille Pattes, French for “centipede” was not the official name of the car… er truck. It was officially called the “Poids Lourd Rapide Break.” Built from a stretched, widened DS wagon, Michelin debuted this monster in 1972.

The 1/43 scale Citroen Centipede model by Altaya captures all the weird quirks of the exterior style: The wideset fenders, the broadened rear tailgate… Unfortunately, the doors don’t open, so there is no peek at the driver’s seat or the testing equipment. Some engine detail is visible through the back window, but it would be really nice to get closer to it, as there are a pair of Chevy big block engines mounted side by side back there to power the rear axle, supplanting the front-mid-engine/front wheel drive layout of a standard DS. 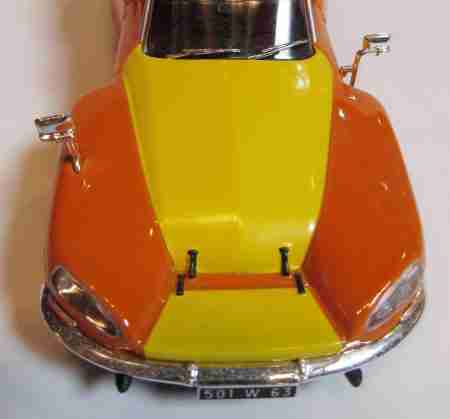 Making up for that lack of detail are a very delicate antenna and mirrors, which are offset at an angle that only adds to the bizarre nature of this car. Also, the combination of gloss and matte paint surfaces is quite striking. Small painted details like the hood latches and the correct license plate are nice touches too.

Quiz time… how many wheels does this thing have? Yeah, it’s a trick question. Each side of the car has five tires, so you’re guessing ten? When you flip the Mille Pattes over on its side, you see one more tire. The larger tire in the middle is the truck tire being tested, making it look a lot like a Kenner SSP car.

This beast was retired years ago from official testing duty, but happily, it splits time between the Michelin Museum in France and the occasional promotional appearance. And perhaps on your shelf if you like strangely beautiful French cars.