Advisory Board Now has a Monopoly on Board Games

Neil Scallan with a his “modest” collection of Monopoly games

Everybody wants to own Boardwalk in Monopoly, but Neil Scallan owns it 1,730 times over. Neil is a collector of different editions of Monopoly games, and is the current world record holder for the most versions in one collection (the previous record was around 500 sets). We’re glad to report that he is adding them to the hobbyDB database and joining our Advisory Board as well.

Amazingly, Neil, who lives in England, only began collecting these games around 2005, picking up the official national editions for countries he traveled to. “It’s like many postcards in one but just a lot bigger to carry,” he said about his souvenirs. “No other board game has so many variations and now so many countries have official sets. One of my favorite versions is the Hong Kong handover to China set.” 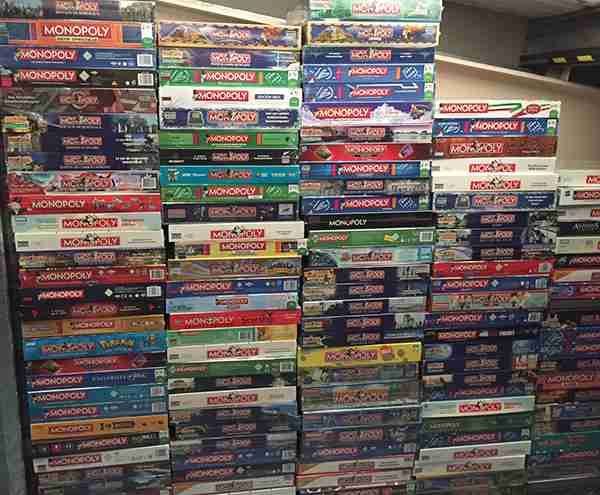 The United States counts for the largest number of Monopoly variants worldwide, with Germany second and The U.K. third. That German contingent has provided a big boost to his collection Neil says. “I love the history and the search for new games. The company limited editions are the most sought after by collectors,” he said. Kinder, a German candy company, was the subject of one of his other favorites. Unable to get one direct from the Kinder, he contacted Winning Moves Germany, the publisher of the game. He finally got in touch with their main distributor and gets games from them on an almost monthly basis. 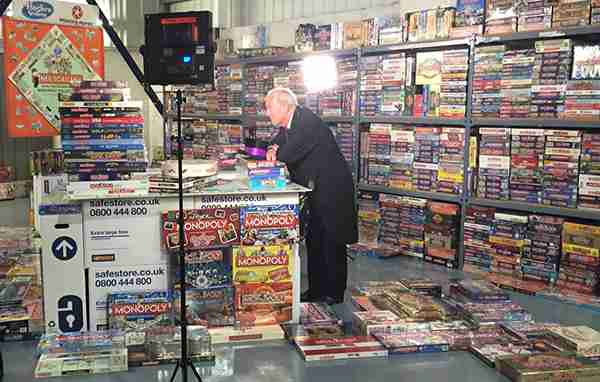 One of the coolest versions in his collection comes from Belgium… After meeting with Yolo Games there, the company added a square with a caricature of Neil’s face on it.

Monopoly collectors face a disadvantage over some other collectors in that their publishers are very secretive about future releases. “Finding out about games is the hardest thing about collecting as the producers won’t let you know and if they do still trying to get one is a mission.”

Somewhat surprisingly, Neil has never worked in the toy and game industry. More surprisingly, he rarely plays Monopoly. In fact, he mostly collects only sealed, newer editions. “As my sets are sealed I haven’t played for over 20 years but I did manage to play at a game launch in Belgium for Les Gauff . My rarest set the Millionth Edition with only 100 made.”

He’ll also tell you his favorite token is the dog but also adds that “Older USA sets had jewel tokens and lamps… they are amazing but for many years I only collected sealed brand new sets . So the jewel tokens are special and I have no sets with them maybe future purchase.” It’s part of his goal to get to 2,000 sets. So even if you’re not playing the game, you still have to know what property to buy.

The official list is exclusively available at http://www.worldofmonopoly.com and will be updated when Neil buys more.
Here you can also find out lots of information on Monopoly.