Get a Diecast Dodge Charger (Minus the Yeeeeha Package)

Over the past two years, we’ve contributed articles to Die CastX magazine for publication on their website and in their quarterly print edition. We hope you enjoy reading about the back story of a couple of older Dodge Charger diecast models.

It’s probably safe to guess that the vast majority of 1:18 scale Diecast Dodge Charger models are painted orange and have a big “01” on the doors (and maybe a rooftop Stars and Bars flag depending on your politics). But for those who prefer their Chargers a bit more stock, there have also been a few options.

Hot Wheels and Auto World have both offered their own versions of the Charger over the years. Overall, the Hot Wheels car has much simpler detail than the Auto World model, which makes sense… at around $25 and $85 respectively, you should expect a difference. 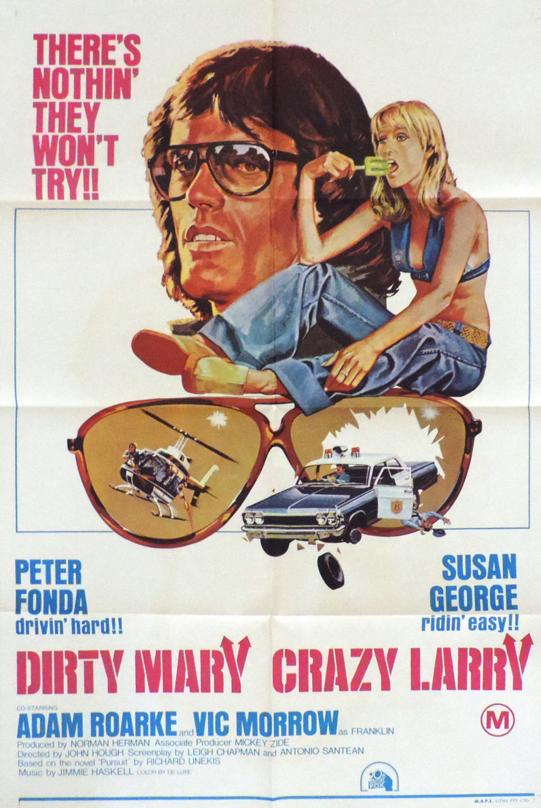 Auto World’s car actually started with a General Lee version. The latest one represents star car from the 1974 movie “Dirty Mary, Crazy Larry.” The model comes in a subtle near-fluorescent lime green and represents the car as seen early in the movie. In other words, clean and (spoiler alert) sans damage. The car doesn’t appear on the poster for the movie, but actress Susan George is shown enjoying a popsicle of the same color.

Hot Wheels went a different route when they made a similar model in the late 1990s. This one is not based on any particular famous car. In fact, this car immediately disqualifies itself from being converted to the General Lee. How, you ask?

The roof of each car is executed differently, and Hot Wheels actually does it better. Their version includes a faux vinyl roof, molded in a subtle texture compete with seams. And the chrome trim at the bottom of the sail panels is molded as well. You would have to do a lot of sanding to smooth out all that detail if you wanted a plain roof. Auto World apparently did not want to make the vinyl mandatory, so they left the roof smooth, to be painted if necessary for future models. The chrome at the bottom of the roof is also flat and just a silver tampo. For a car with window and fender trim molded as delicate separate pieces, this is kind of disappointing.

On the other hand, the Auto World car has incredible underhood detail. Everything is painted the correct colors, of course, and the engine is plumbed and wired to the point where it looks like it should actually start up. The best detail, though is the hood hinges, which replicate the complicated spring-loaded hinges on the real car. Speaking of the hood, if you look at the car from behind, you will see that the hood vents are not only painted black, but also contain the turn signal repeaters.

Under the trunk lid, Auto World features the trunk mat with houndstooth pattern and fuel filler pipe that severely intrudes on luggage space, details you seldom see on models at any price. 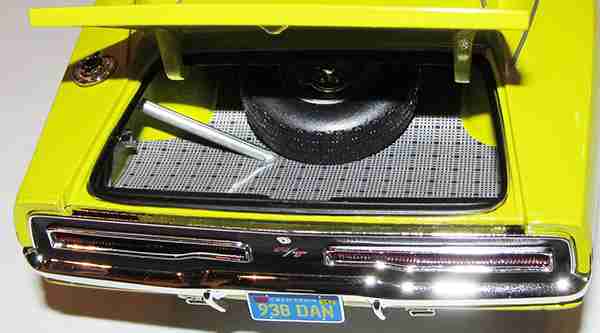 The Hot Wheels version is expectedly basic under the hood, including the sturdy but not very realistic hood hinges we’ve come to expect on most model cars.

The corner turn signal lights are another area of difference. They’re molded into the body on the Hot Wheels car and painted, but are just flat tampos on the Auto World. The latter approach was likely  taken to make it easier to create 1968 or 1970 versions of this car, which differed in these areas. To make up for it, Auto World included a really neat feature: the covered headlights flip into position with a little help from some sharp fingernails and a little patience.

The average collector probably doesn’t spend a lot of time looking at the bottom of a model car, but underneath, Auto World did some amazing things. First, they included working suspension, including flexible leaf springs in the rear. Second, when the car rolls, the driveshaft spins. Finally, what appears to be a sloppy paint job to the uninitiated is actually a faithful replication of the overspray of body color paint found on the real car.

Hot Wheels has moved away from large scale models for the most part, but there’s always a chance Auto World might eventually produce a version in your favorite color eventually if they haven’t already. Yeeeeha!