Be Thankful For Slot Cars This Week

There are no finer traditions for Thanksgiving than turkey with stuffing, binge-watching football on TV all day, and trying to avoid politics around the dinner table. In our family, there’s one more important ritual: Setting up the slot car track in the basement. With our daughter Lillian out of school the entire week, and cold weather setting in (but optimal ski conditions still at least a month away), we need a good indoor activity for the whole family. So, I’ll be writing about all slot cars all week. 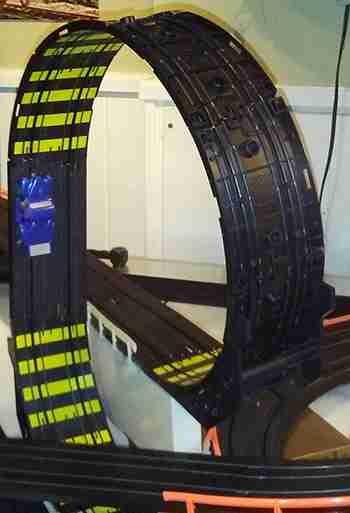 As you can see from the photos, we don’t take track design lightly. For 2016, we chose to design a layout on our air hockey table, which is about 6 by 3 feet. Gracefully crammed into that space is about 45 feet of track including multiple flyovers, lane changes, and a wicked multi-level loop-de-loop. “Dad, that’s not a race track,” said Lillian. “That’s a roller coaster!” In honor of that observation, she started making tiny passengers out of post-it note paper and sticking them to the cars to see if they could survive the ride. Results were mixed but pretty funny.

Our average time to design and set up the track is about five or six hours, plus a couple hours of fine tuning the layout before actual racing can take place. Sure, the layout might look finished, but upon testing, we usually discover dead spots, rough transitions, poorly banked curves, low clearances and other such technicalities that must be fixed. It’s a lot like civil engineering would be if they built the roads first and then drove different vehicles on them to see if they were safe. In this particular case, the course was initially set up to start in a clockwise direction, but after some test runs, it was determined that the cars could handle some of the curves, and especially the transitions in and out of the loop more effectively in the opposite direction. 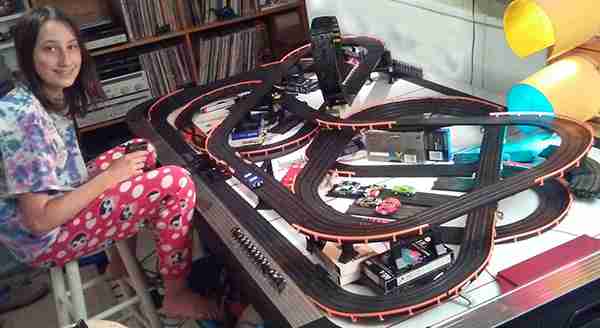 Our setup is consists of mostly Aurora AFX track, although there are some special bits from other brands, namely Tyco and Life-Like. The available cars are a mixture of vintage Aurora ThunderJets, Aurora AFX cars, Life-Like cars, and Tyco cars. Each brand has vastly different handling characteristics. The T-Jets are slow and not magnetized to stick to the track, so they’re best suited for flat, simple layouts. The Life-Like cars are our fastest overall. They can be adjusted to either run really fast but less sticky, or a bit slower but with more adhesion to the track (Unfortunately, all of our Life-Like cars wear NASCAR bodies, and the long overhangs front and back get caught in the transitions in the loop). The AFX cars are super sticky and don’t respond well to subtle speed adjustments. 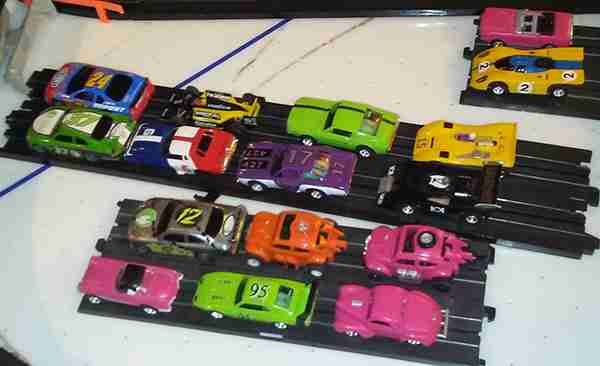 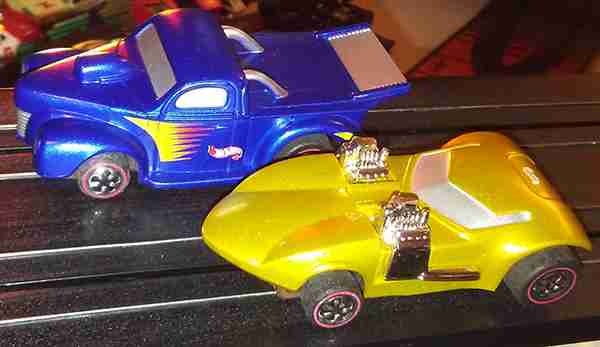 The winners this year are Hot Wheels racers from Mattel Racing.

While the other cars waited in the paddock, it turned out that the cars from Mattel Racing (based on Tyco chassis) were the best combination of performance factors for this year. Two in particular, designed after the Hot Wheels ’40 Ford Pickup dragster and the Twin Mill, work flawlessly. 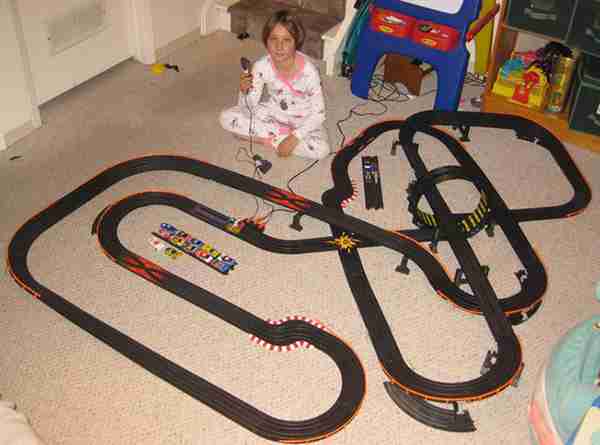 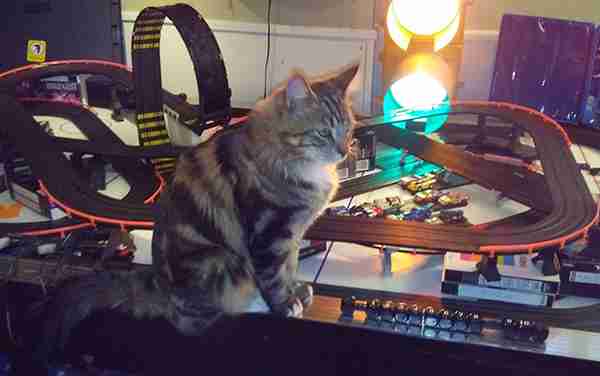 Nigel waits for his prey to come around.

Above is a shot of our course from a few years ago. In years past, the track had been set up on the basement floor, which led to our dogs chasing the cars and damaging the track. With the hockey table now taking up some of that space, we decided to move to the higher altitude. As you can see, our cat is very curious about the very speedy mouse-sized projectiles whizzing around. He’s surprisingly gentle on the track itself, thankfully.

Below is a video of Lillian performing a successful lap with the blue Ford pickup. Most of the track is designed to handle best at moderate speeds. Our controllers are modified with a piece of foam under the trigger to keep from squeezing too hard unless necessary. If you watch closely, you will see that the loop, with its extra vertical straightaway requires a sudden burst of full throttle, quickly followed by a very light touch into the unbanked exit curve.

Six hours to engineer, ten seconds to circumnavigate, a lifetime of memories. So much to be thankful for.