Early Slot Car Track was Designed for Driving, Not Racing

As I mentioned in yesterday’s column, Thanksgiving week is a time for setting up a slot car track in our household for some good family racing fun. While modern slot cars are capable of ridiculous speeds through wild courses, that wasn’t the case in the early days of the hobby. Slot cars were not originally designed for racing, but for simulating a real driving experience, much like the way model railroads did. These earliest slot car designs were mostly based on regular production cars, although some of them were sporty models. These cars moved at a much slower pace than modern slot racers, and the track reflected those conditions. 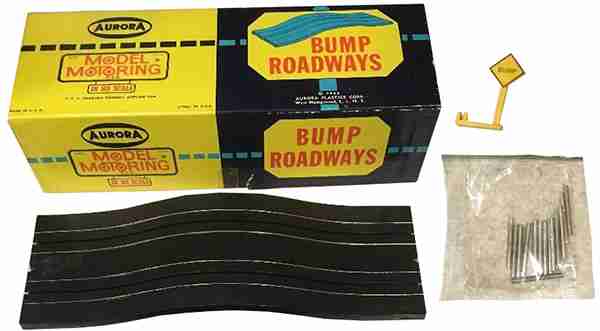 Aurora Model Motoring was the dominant brand of HO scale slot cars in the U.S. in the 1960s. Their track was also made to emphasize skill over speed, with the Bump Roadways section being a perfect example. Heavily magnetized modern slot cars might be able to hug the pavement going over this hump at maximum throttle, but even at low speeds, the old ThunderJet cars could get airborne at the pinnacle. 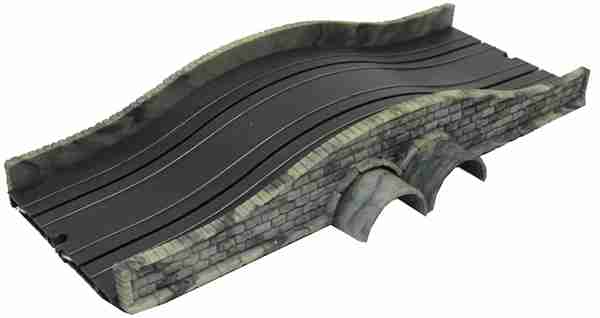 They probably wouldn’t sail across the room at those velocities, but they’d likely get enough lift to lose their bearings and crash. This track segment came with warning signs, and later versions even had lovely culvert decoration.

The Junction Turnout track gives you a good clue about the intention of these early sets. A knob on the side of this segment made it possible for the car to make a turn off the main track and onto some other adventure in civilized driving. It’s not clear how someone could hold the controller on one side of the layout while reaching across to turn the knob, so some teamwork was required. 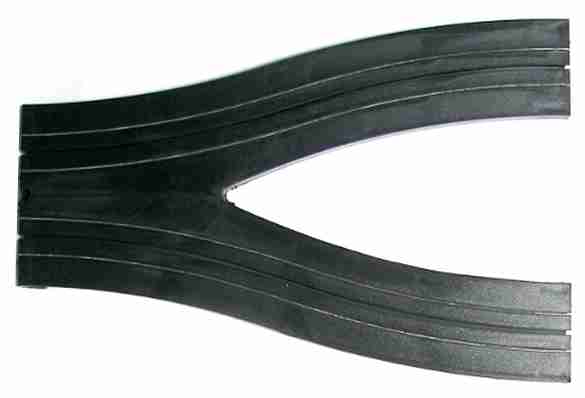 The Y-Split track shows another feature that most modern slot enthusiasts don’t think about… Model Motoring was designed as a single lane experience. In fact, most layouts at the time were created not for side-by-side racing in one direction, but for each lane to run in opposite directions like a public road. So the Y-track was designed not to separate race cars, but to allow a median between single lanes going in opposite directions.

The original Squeeze Track also takes on a different meaning when you think of city driving versus racing. On modern tracks, especially with the much wider car designs, a squeeze track usually moves both lanes inward, creating an opportunity to intimidate your opponent in a game of side-by-side chicken. Here, only one lane swerves, designed to test your reaction as a car suddenly veers towards your lane from the other direction.

Cobblestone track segments were designed to give a different look and theme to the track setup, but also required a perfect touch in order to not get bogged down between the bumps. The old cars didn’t have a lot of torque, so stopping here wasn’t a wise idea. 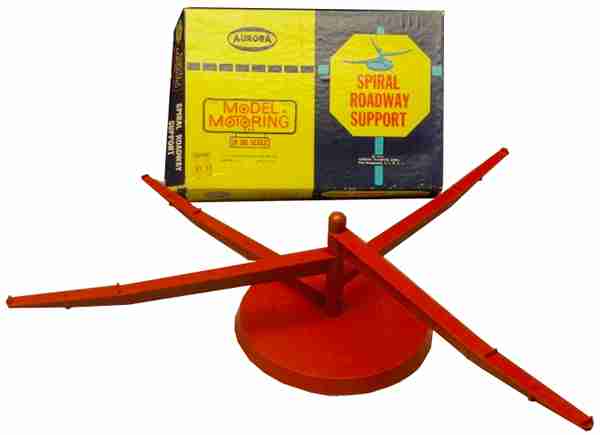 Here’s something that isn’t really a piece of track, but a useful (and now rare) accessory… The Spiral Roadway Support allowed the creation of 360 degree (or more) climbing turns. While that sounds like an exciting prospect, remember, without the benefit of magnets or banked curves, responsible driving was still the ideal. Play it safe, kids! 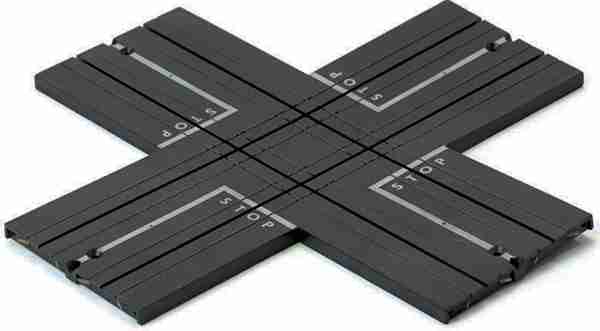 A turning point in the hobby may have come with the introduction of the Four-Way Intersection track piece… as you can see from the photo, the track was intended as a four-way stop, complete with markings on the pavement. Clip-on stop signs were available too. But it took kids about thirty seconds to figure out that it was way more fun to try to beat the other drivers through the crossing without stopping. …And then another three seconds to realize that crashing the cars was even more fun. And thus, the era of responsible miniature motoring ended in a series of horrific but amusing collisions.

…Then Aurora really upped the ante by creating the Railroad Grade Crossing section. Hey, if smashing two cars together was a hoot, then beating an HO scale train across the road was buckets of fun, and causing a major derailment was a sheer delight!

Aurora also offered the Speed Curve set, which was a set of barriers designed to separate the two lanes of a curve. When different radius curves were nested together, and the cars were all set in one direction, this encouraged high-speed, four-wide racing action. Yep, the race was officially on. 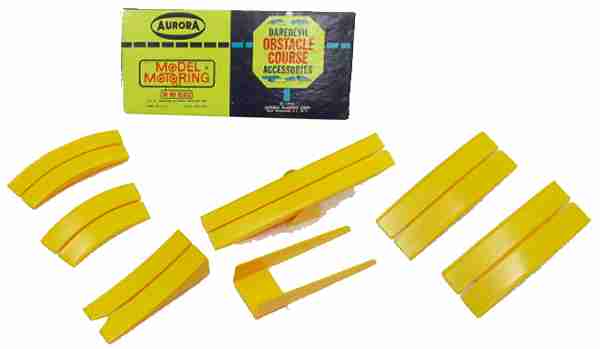 The cat was completely out of the bag with the release of the Daredevil Obstacle Course Accessories set. These yellow pieces fit onto various straight or curved track segments to create jumps, teeter totters, and miniature bumps. They weren’t electrified, so speed was of the essence. Skill was still necessary, but safe, sensible driving was pretty much a lost cause at this point.

Around the mid 1960s, it was apparent that kids wanted to race their slot cars, even if they weren’t that fast yet. Body designs started to include some even sportier production cars as well as famous race cars such as Ferraris and Shelby Cobras. Upgraded chassis and motor designs added a bit more speed, but traction was still anemic, as they still rode on skinny tires. But by the end of the decade, the parameters for slot cars had shifted towards pure racing. Track design started to reflect this new emphasis as well. We’ll take a look at some more modern specialized slot car track soon.

Let us know in the comments if you have any favorite old school slot car track that we didn’t list!

I had this stoplight intersection track. I paid 4.75 for it 1972. I wish I till had it. It was an excellent and well designed accessory.

That is an awesome accessory!

How do you connect the tracks

Most new tracks snap together. The old Model Motoring track just butted up one piece to antoher, and little plastic connnectors had to be inserted to hold them together. For permanent layouts, you could use nails.

I’m talking about the wiring my set the track and controllers have 3 screws , I only see 4 connectors, mine must be older

I enjoyed your article. Your absolutely right about today’s hobby speed is all the rage. I’m old fashioned when I was first introduced to the hobby it was not only about skill when racing but landscaping i.e. tunnels,  winding roads through mountain passes, bridges over deep gouges. The fun was also how to make it look as realistic as possible

Your articles are great, but I have a question. Where can I find a true model motoring set for my ho scale layout? Is it all about the speed controllers? I want to be able to turn it on and let it run by itself. In other words set it and forget it. I see model motoring sets out the but they seem to be racing sets. I’m pulling out what little hair I have left trying to set this up. Help!!!