A few days ago I wrote about some Aurora Model Motoring slot car track pieces that were tied to the hobby’s roots in simulating driving instead of racing. By the late ‘60s, the preferred intent for slot cars was racing at higher and higher speeds on increasingly ridiculous courses. Wider cars, stickier wheels and magnetic traction assist combined to offset the rise more powerful engines, resulting in flat-out speed with less skill required.

As the Model Motoring era of slot cars subsided, several new brands of cars, track and accessories took over the hobby. Here are some track segments that signaled the new trends. 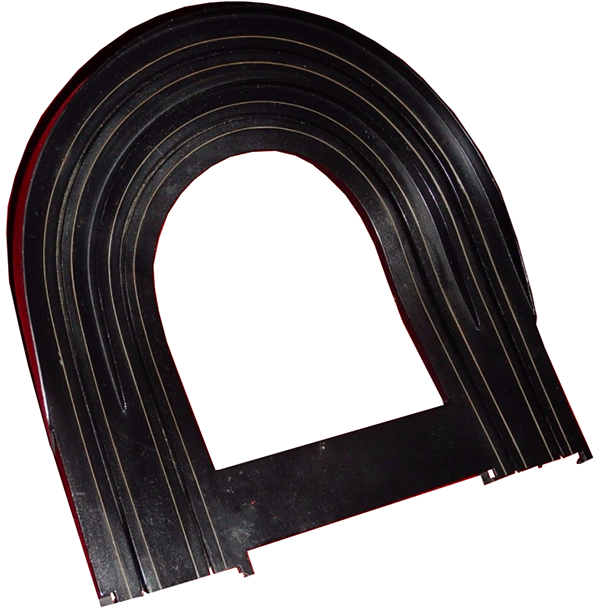 The Model Motoring Banked Hairpin Track Curve was one of the final hurrahs for the old brand. This single piece of track was a very tight 180 degree curve featuring built-in lane barriers. But even with the newer Aurora Tuff-Ones chassis, the cars still weren’t very fast or exciting.

Lionel, best known for their O-scale trains, dabbled in HO scale for a bit in both areas. This Racing Start Track piece was one of their innovations. The sharp transition angles suggest they didn’t quite understand some of the forces that slot cars might be subjected to. In recent years, Lionel Racing has managed to remain a small player in the slot car game. 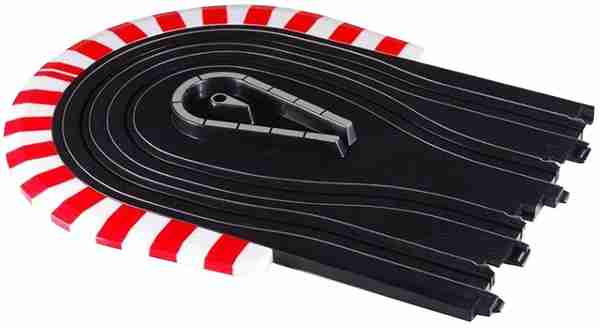 Aurora went back to the drawing board with their AFX (Aurora Factory eXperimental) line of equipment. The new cars featured modern racing amenities mentioned before, and their new track system featured easier to assemble and stronger track connections. (The bad news was this system was not compatible with the old track, making it obsolete.) Pieces like this Hairpin Squeeze Track were symbolic of the new ideal. The snap on red and white rumble strips are necessary for additional sliding clearance, and for added safetly, guardrails were a wise idea. 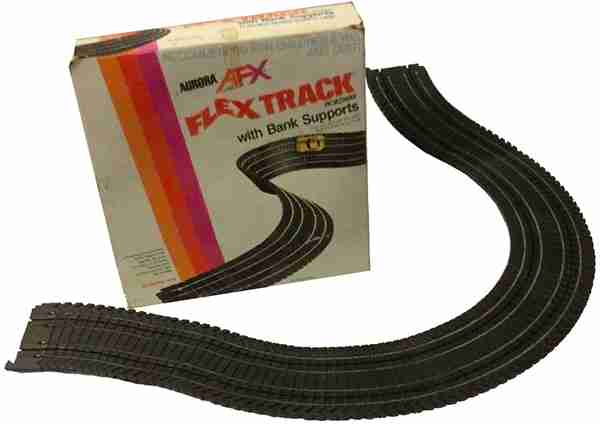 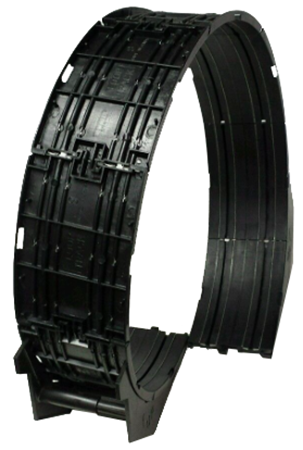 One constant of track design has been curves that bend in combinations of 45 degree and 90 degree angles. In an attempt to free up the hobby even further, AFX introduced Flex Track, a strip of infinitely bendable and bankable track. It was cool in theory, but was very bumpy to drive on, and the springs that replaced the solid rails were uneven as well, so it never became that popular.

Many model railroad companies tried their hand at slot cars as a possible extension of the brand, but only a few thrived in both hobbies. Tyco became one of the dominant brands in both until their demise as a company… luckily Mattel bought them just in time to rebrand the slot cars for their Hot Wheels themed sets. The trains did not survive, however.

Tyco offered an innovative loop system in which 8 sections of track combined to make the full circuit. With some creative thinking, course designers could add extra segments to make the loop taller, or even have it climb walls. 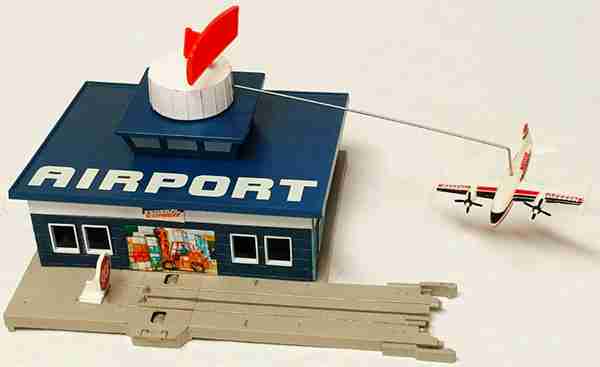 Lost somewhere in Tyco’s racing and railroad history was the US1 Trucking slot series. These were set up for slow moving, realistic “action” including backing up trailers into docks and side spurs such as this elaborate Airport Terminal set. Fun in theory, but kids decided racing slot semis was even more fun, this series only lasted a few years. 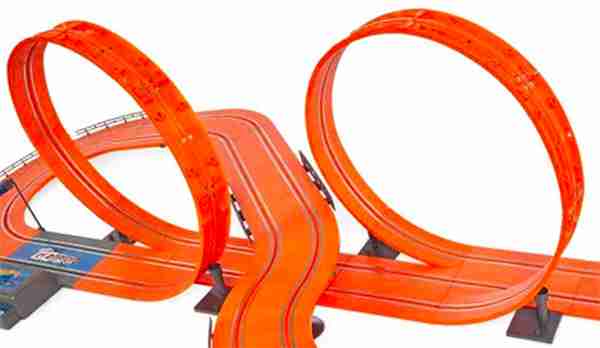 As for the Hot Wheels connection, someone figured out that coloring the track orange and adding loops would be a brilliant bit of marketing, so we got crazy set ups like this crazy double loop piece. A close look shows that each single lane loop also acts a as a lane changer. Mattel’s current sets usually come with minimal track for small, inexpensive layouts that serve as a nice introduction to the hobby. 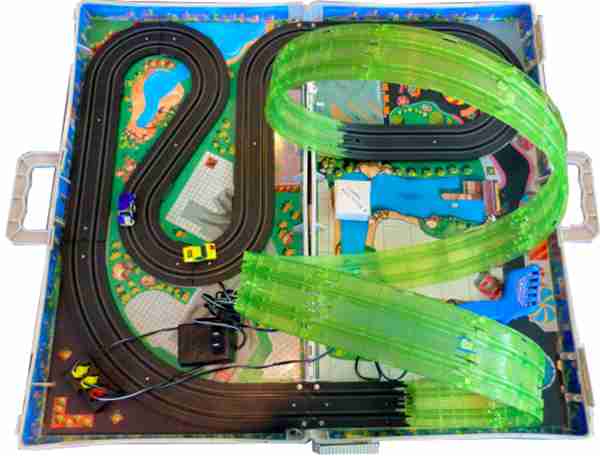 Speaking of crazy loops, Galoob entered the slot car market in the early ‘90s with their Micro Machines sets. The cars were larger than the standard Micro Machines, but significantly smaller than the “HO” offerings from most brands. Their layouts, such as this Cyclone City set, also came mostly pre-assembled in small cases, with only a few bits to set up to get running. For a variety of reasons, these never really caught on and were only available for a few years. 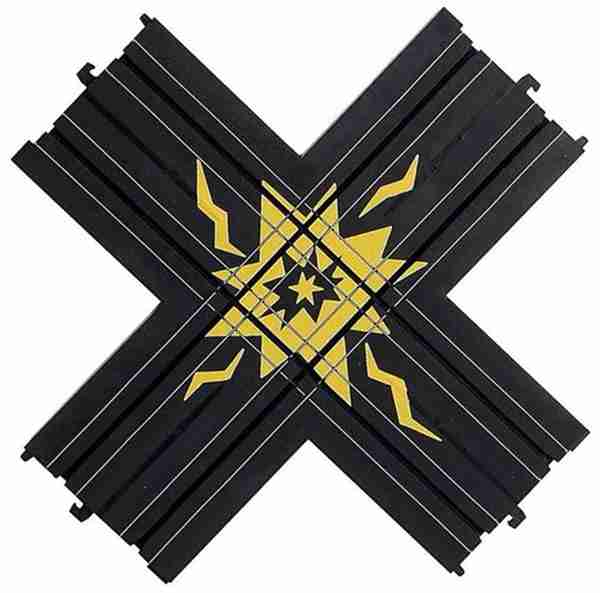 Remember the Four-Way Intersection piece with responsible pavement markings we saw last time? Life-Like figured out what kids want, so their version of this piece was called the “Crash Intersection” and was marked with a big ol’ explosion graphic. Give the kids what they want, right? Life-Like was one of the early companies that succeeded long-term in both hobbies and stayed relevant with such thinking. It remains one of the few brands you might see represented in both areas on modern toy or hobby shop shelves.

Another cool Life-Like track was the Skid Straight segment. The older versions of squiggle track featured both lanes swerving in parallel fashion, but this one has a much more random set of curves. Their first version was three inches wide like regular track. Later ones added a wider “shoulder” to give a bit more space. The most recent one isn’t even black pavement, but is decorated in a blue swirly water pattern that Van Gogh might approve of.

While every manufacturer’s cars are largely compatible with different track brands, the track itself from one brand to another is not. Life-Like figured out a way around that and created a set of short adapter tracks to solve that problem. One version connects their brand on one end to Tyco on the other, and another version goes from their brand to AFX. These are highly recommended bits to own, allowing the best of all worlds. Auto World now offers the same adapters. The course my family set up for Thanksgiving break this year includes track from all three brands thanks to these pieces.

Unfortunately, there don’t seem to be any adapters to go back to old Model Motoring track, so you’ll have to rely on vintage stock for that. But a recent trend in slot cars has been to offer the old ThunderJet chassis with new body designs, so at least you can see if slow and steady can indeed win the race on a new course.

Let us know if you have some favorite pieces of slot car, early or modern, that we didn’t cover here!

Yeah, I used to do this with hot wheels sets and they were huge!  I used to rase the cars against my friends.  Now I have no friends and I have a huge collection of Diecast ’57 Chevy models.  The biggest in England.