Looking Back at Some Buick Boattails

Over the past two years, we’ve contributed articles to Die CastX magazine for publication on their website and in their quarterly print edition. We hope you enjoy reading about the back story of a couple of older Buick diecast models.

In 1938, Harley Earl created what is widely considered the first concept car in order to apply for the job of chief stylist at GM. The Y-Job, as it was called, featured full fenders smoothly integrated into the body, and an overall rounder, sleeker shape than any car that anyone else was producing at the time. Unlike many later concepts, this was a fully functional car, which Earl used as his daily driver for several years.

Throughout the 1940s and first half of the next decade, the basic lines of the Y-Job were apparent in almost every Buick. But by the end of the 1950s, design trends had moved on, and Earl was replaced by Bill Mitchell. Even though Mitchell pushed GM design into the modern era, he occasionally looked back to the Y-Job for inspiration.

In 1971, Buick dug deep into that past for design cues for the new third generation Riviera. The resulting boattail was a radical design, but parked next to the Y-Job, you can see the similarities. Both cars start with a raised, pointed nose section, with the body widening at the cowl. Then they taper into a sharp point at the back. Between all of this contouring are fenders that flow into the the same basic “sweepspear” shape.

A few years ago, Anson made a highly detailed model of the Y-Job with opening hood, trunk and doors. The same model was also released by Racing Champions (shown here) with less detail, particularly in the engine bay. The car captures the flowing lines of the original, including the delicate strokes of chrome along the sides and grill. And it’s available in any color as long as it’s black.

The later Buick model comes from Road Signature. The overall effect of the model captures the basic feel of the real car, but several details are a bit off. The grill slopes at a less aggressive angle than on the real car, which throws the front proportions out of whack. Out back, there are ten rows of vents on the trunk (There should be 13) and the rear window has a raised ridge down the middle that should actually be smooth (on the real car, that center line is a seam on the inside of the glass. One other oddity… the car features the large optional center console with shifter, but also includes the column shifter too.

Regardless of the shortcomings of these models, they represent an interesting link between two eras of brilliant design. Parked next to each other, you can see the family resemblance between these beautiful Buick Boattails. 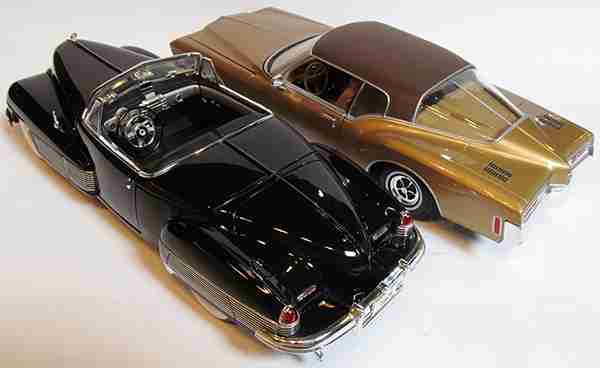