Bondmania- a look at the old and the new 007 memorabilia

With the hotly anticipated release of the new James Bond film, ‘Spectre’, excitement is building, as is the interest in all Bond related merchandise. A British Institution; Bond has always had an avid following with collectors since Ian Fleming created the character in his first 1952 book ‘Casino Royale.’ So what better way to pay homage to this British agent than take a look at the old and the new 007 memorabilia.’ 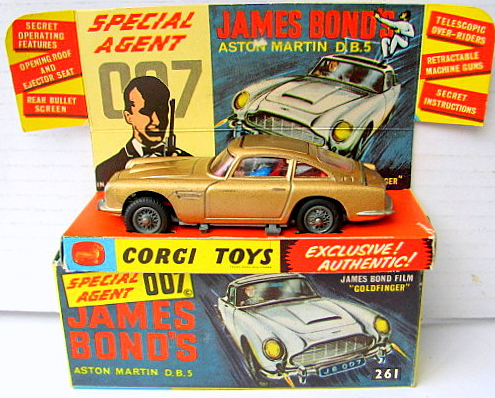 In 1965 Corgi won the first ‘Toy of the Year’ award for their James Bond Goldfinger Aston Martin DB5 diecast car. With working ejector seat (shots the baddie into the air), retractable machine guns and bullet proof shield this 1.46 scale model was laden with gadgets. More than 2.5 million of this toy car sold in the first year of release with an estimated 4 million during its entire production run (1965-1968) at a retail cost of 9s 1d. Today mint in box, in working order and complete with accessories, the darker gold version sells for $150-$250 whilst the brighter gold can retail from $500-$750. 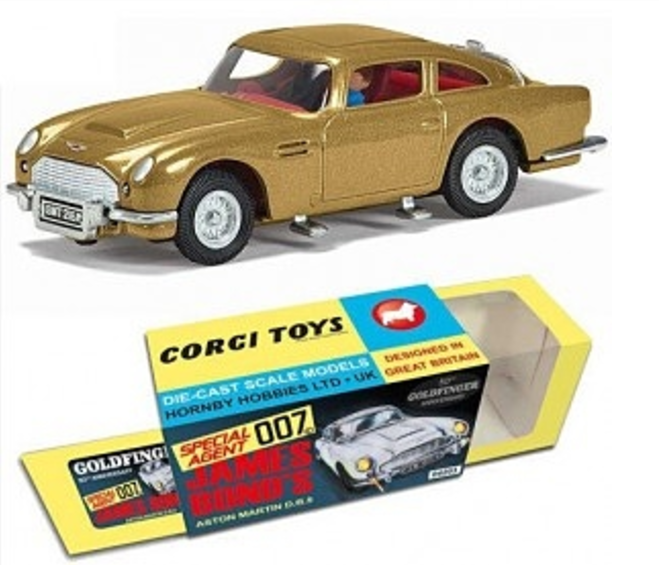 Paying homage to this iconic die-cast model Corgi recently released their 50th Anniversary DB5 available in both gold and silver retailing at $19.99 each. Completely selling out from the Corgi website more or less instantly, it is however possible to acquire one of these Aston Martin’s from Corgi’s official stockists and it’s worth trying as already the gold version is making over $100 on internet sites and the silver doubling in price proving this is a must-have collectible. A fantastic model, designed in Great Britain with so many features including the original retractable machine guns, ejector seat and opening roof all housed in an innovative eject sliding box highlights once again, that Corgi really are the leaders when it comes to making believable and collectable die-cast TV/Film related scale models.

Scalextric have also released their new ‘Spectre‘ set featuring the Aston Martin DB10 and Jaguar C-X75, cars that appear in the actual film. Retailing at $129.99 the high performance figure-8 track has side swipes, leap ramps, 90 degree crossover and a 180 degree curve allowing you to recreate your own 007 car chases. Although play nicely, as you don’t want to be racing around the track too quickly as it’s important that you keep those cars in mint condition for future collectability. 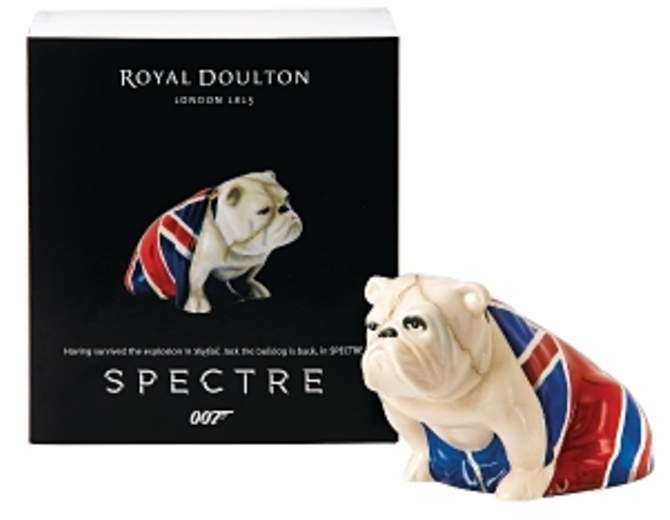 If toys aren’t your thing but ceramics are then I recommend the new Spectre Royal Doulton ‘Jack the Bulldog.’ This ornamental dog made a cameo appearance in ‘Skyfall‘ when it was seen sitting on ‘M’s’ desk. After surviving a traumatic explosion with little more than a few cracks to his face and some charring to the union jack flag draped over his back M bequeathed the bull dog to Bond and it is now making a return appearance in ‘Spectre’. Doulton’s version comes in at $50 and has the crack down his face as seen in the film.

Aside from all the modern James Bond memorabilia there is a vast array of vintage items as well. Those original items relating to earlier films can now cost a premium, but are worth seeking out as they represent classic Bond heritage. 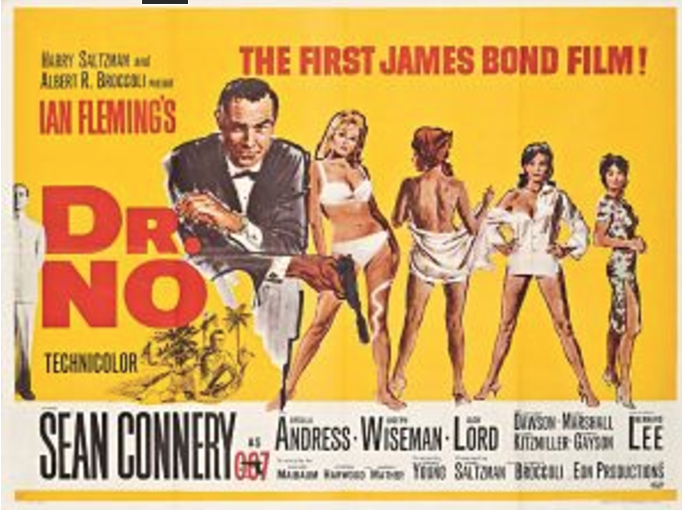 Christies auctioneers are holding a live online Vintage Film Poster sale which includes 16 James Bond originals. The poster advertising the 1962 release of the first Bond film Dr. No depicts artwork by Mitchell Hooks and establishes many of the themes and visual aspects that came to be associated with the James Bond films. A pre-sale estimate of $5,000-$7,000 this is so much more than just a movie poster as it represents the beginning of Bond and as with all early movie posters is a piece of artwork in its own right. There is also a later silk screen poster which portrays artwork by Todd Slater to mark the 2007 re-release of Goldfinger. This is a U.S. limited edition silkscreen in red signed by the artist and inscribed 4/10. It was part of a drive by Mondo, the collectible art boutique of the Alamo Drafthouse Cinema chain who focused on bringing art back to movie posters by commissioning and producing limited edition screen-printed film posters by contemporary artists (pre-sale estimate being $2,000-$3,000.)

The most expensive Bond artwork ever to sell was again through Christies in 2011. The original concept artwork for the 1971 ‘Diamonds are Forever’ poster by Robert McGinnis made $79,250. 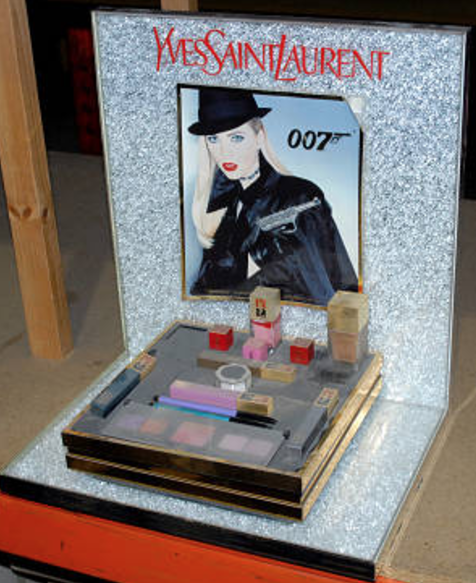 Vectis Toy Auctions are also holding a special James Bond sale on 25th November to coincide with the release of the new film. Featuring around 700 lots it covers a vast array of vintage and modern items spanning every James Bond film produced to date. Made up of a one private owner collection it includes Gilbert figures and accessories, tinplate and diecast vehicles and an assortment of poster and film ephemera. One item that is sure to attract attention is a Point of Sale Yves Saint Laurent make-up shop display as it’s an unusual and unique piece of Bond memorabilia.

Also being auctioned are facsimile copies of the film screen plays including Dr. No, Moonraker and For Your Eyes Only along with lobby cards, stills and leaflets from the films. A comprehensive collection of 007 collectables and memorabilia this sale is a must for all those fanatical about Bond. 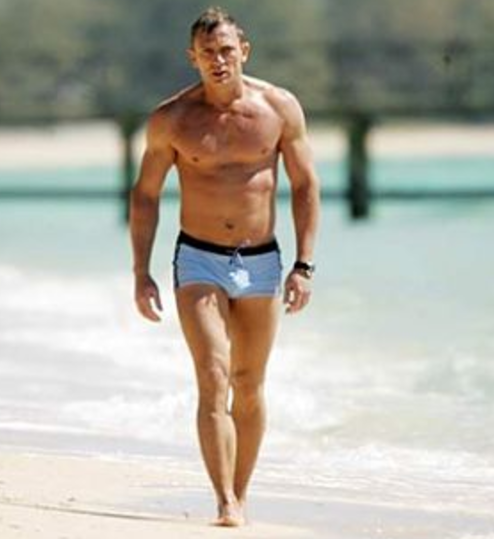 Me personally, well I am just as struck by MI6’s special agent and have a fascination with all things James Bond, and yes I do have a few pieces of memorabilia but if you asking what is the holy grail for me? It’s a no brainer – those skimpy Swimming trunks which Daniel Craig wore on his first appearance as Bond in 2006 Casino Royale but sadly they have already sold for a staggering $44,450 and not to me!