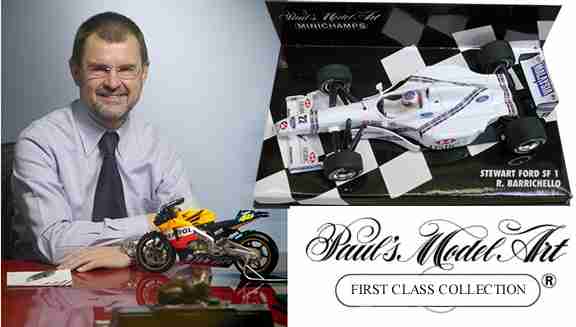 Minichamps and hobbyDB recently teamed up to bring you a detailed, complete archive of all their models, a history that dates back to 1996, including thousands of cars. Long before that, however, the company’s Managing Director and Founder, Paul G. Lang, was already creating miniature cars under other company names.

In the early 1970s, Paul started building models under the name “SD Models” exclusively for the Danhausen World Model Car Catalogue, a company he co-owned with his brother Hans Peter Lang. His early models were 1/43 scale, and production was moved to Western Models, a well-known diecast company in England. Many of these were available as unpainted white metal kits, but even unfinished, the detail clearly stood out for collectors.

Eventually, Paul and his company began to offer a particular car in both 1:43 and 1:18 (and sometimes other) scales. As far as sharing the design process from one scale to the next, “It helps a little bit,” said Paul, “Especially the parts construction and mold layout. But the basic construction needs to start from scratch every time.”

The Western offerings were expanded to other scales for Danhausen Modelcar. The new Metal 87, Metal 43, Metal 24 and Plumbies lines, were all available as white metal kits. Newer, finished models of Paul’s cars were also available from  Andre Marie RUF in France, and Cartogram in Italy.

Paul’s Model Art made different versions of the Kennedy Lincoln.

By the 1980s, European collectors were willing to pay premium prices for exquisitely detailed, limited edition finished models, so in 1990, he founded a new company under the name Paul’s Model Art to build cars for that market. The first diecast car Paul’s Model Art made by Minichamps was in 1:43 scale, Hans-Joachim Stuck’s DTM-winning GTC Audi V8. And their reputation for quality soon earned them the right to produce official promotional replicas for the likes of Audi, Mercedes-Benz, and Porsche.

Minichamps models include a wide variety of cars, but they might be best known for their Formula 1 cars. “Throughout the 26 year history we had various themes” said Paul. “The most notable ones are the Michael Schumacher, Ayrton Senna and Valentino Rossi Collections.” Their attention to detail and subtle differences from car-to-car, even race-to-race is amazing. “We have frequent meetings where we exchange current racing events, street car releases, and our own ideas, in order to come up with possible collectibles.”

The “Paul’s Model Art” name was popular enough to be used long after the switch to Minichamps.

Long after the name change to Minichamps, the Paul’s Model Art logo still appeared on annual catalogs as a reminder that they would still produce beautiful models with the same attention to quality. The new name has stuck with diecast enthusiasts, but no one will ever forget where they started.

Outside of producing miniature automobiles, Paul also collects classic Art Deco items, timeless examples of great design. His hope is that, “one day, when the digital hype is over, people will remember the classic collectible hobbies like model trains, model cars, model figurines etc.”

Hi! I have a made in France 1/43 Paul’s Model Art Ferrari Renntransporter that i’d like to know more about. I can’t seem to find anything about it on the internet. All I know is that I got it from the Sepang Racetrack during the 2003 F1 season.

Hi Jose, if you add a photo of it we might be able to help identifying it.