A Guest Blog Post by Dave Moss
This article was originally written for Rareburg, who in December,  joined forces with hobbyDB to provide an excellent source of collectible knowhow for the community.

If you grew up in the 1980’s then you will probably remember Penny Racers. Produced by Takara and released in the US and UK from the early to mid 80’s, Penny Racers were a cheap pocket money level toy with a neat gimmick. 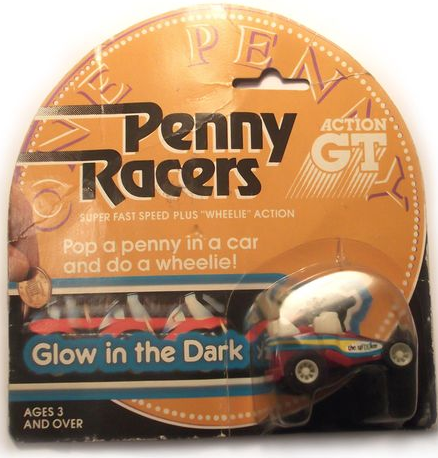 The cars were small plastic toys with a pull back motor that could make them run at quite a speed. Each vehicle featured small Dunlop branded tires and was designed with a cute deformed scale style.

Now here is where the penny in ‘Penny Racers’ comes in to play, on the back of the toy was a small slot into which a penny could be placed. The addition of the coin’s weight meant that when the car was pulled back and let go it would do a wheelie. And if you were 5 or 6 years old, this was the coolest thing ever, at least it was for me!

The Penny Racers toys themselves were based on a Japanese toy line called Choro-Q that is still in production today with some being highly collectable. 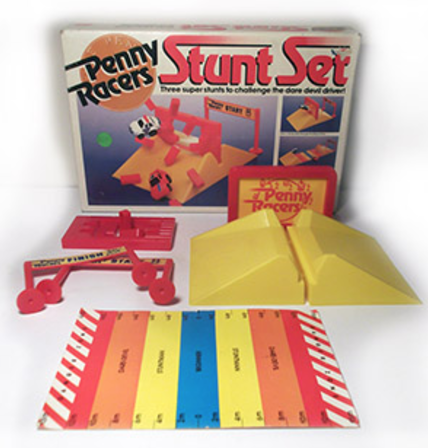 Over the years various waves of the vehicles have been produced ranging from cars to planes (Penny Planes), tanks and more. A favorite wave of mine had the addition of glow in the dark parts.

As well as the cars there were a few larger items released to go along with the line. A large stunt set which came with ramps, start and finish lines, breakable brick walls and the ring of fire was great thing to own. With the tag line ‘Three super stunts to challenge the dare devil driver!’ it was a must have addition. There was also a carry case for you to store you collection of vehicles in.

An interesting thing to note is the packaging which was re-designed for each country the toy was released in. In the UK the backing card features a large one pence piece. In the US this was swapped for a one cent coin. So if you want to own a complete collection, you’ll need to track down both releases. 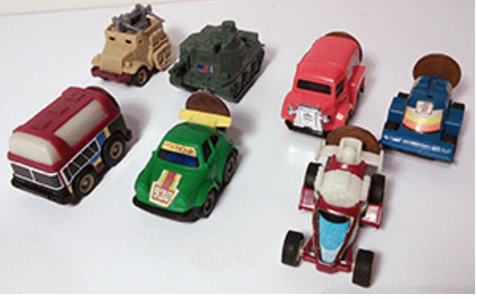 In 1998 a Penny Racers game was released for the Nintendo 64, based on the Choro-Q line that was still popular in Japan. The game even managed a sequel but this was only released in Japan under the Choro-Q brand.

In recent years the Early Learning Centre has brought the Penny Racers line back into the shops, but for me it doesn’t hold the same charm as the original 80’s toy line. But who knows what will happen to kids playing with them now in 20 or so years time. It could be a future classic.

If you are looking to collect Penny Racers, they are not the easiest things to find. Many people remember them, but no one seems to have them. You’ll often find them mixed in with other toys from the 80’s or just listed as a pull back car. So the best way to track them down is not to look for Penny Racers at all, but to keep an eye out for pull back cars made by Takara in the 80’s.

When you do find them, they are a joy to own and really do look great on display.

I convinced my younger brother that putting a dime in a Penny Racer car would make it go 10 times faster. He really wanted it to be true.