When MIP Means “Messed-up In Package”

In 1975, Hot Wheels introduced a new way to package their vehicles, in themed 6-Packs. Cars were attached to a simple cardstock base with rubber bands, and the artwork featured some of the cars from that set. In the earliest sets, the cars were usually taken directly from Mainline offerings with no distinct variants. So it was all about the packaging.

At a recent yard sale I found a set from 1982, the “Classic Machines,” in what could be labeled “Never Removed From Package” condition.

As you can see in the images, that’s not necessarily the same as “Mint In Package.” More like “Messed-up In Package” in this case, right? All but one of the cars had become unmoored from their rubber bands (the black and red Bugatti on the left was hanging on by a thread). The rubber bands had dried and cracked into a texture resembling uncooked ramen noodles (but probably not as tasty). Not to mention, the top panel had been hopelessly folded down and had some rough edges. But they were only asking $2 (the original price sticker said $8.99!). And surprisingly, none of the cars appeared to be damaged. I couldn’t pass it up.

Of course, I wanted to fix it, but decided on a challenge… how much could I preserve the “sealed box” aspect of the set and still get the cars into place? The box ends were firmly glued, so I didn’t want to ruin that. When originally made, the cellophane window was attached by a dab of adhesive in each corner. Here, it was completely detached on one end, so I carefully pried as much of the window out of place as I could, trying not to dent it worse. From there, I had limited access. Success!

Big question: In what order were these cars originally parked? I found a photo online that showed the same set as mine, with the cars ordered from left to right thusly:

Okay, looks good… except as I mentioned before, the Bugatti was the only car still attached to the base, and it was on the left. So I consulted with Robert Graves, our resident Hot Wheels maven, and he found a photo that was the exact reverse of the order I found. Hmmm. It fit the pattern by having the “Bug” on the left, so I went with it. It’s possible there was no particular order for these cars in the first place. Unlike newer sets with form-fitting plastic bubbles for each car, the early sets could easily be swapped around during what was likely hand assembly. It’s also worth mentioning, there have been several Classic Machines sets over the years, so you might find one with similar packaging but a different assortment from this one. 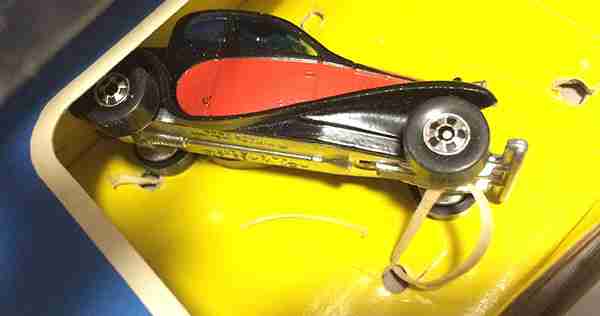 You know how you can never find a rubber band when you need one? It’s even harder to find bland, tan ones in the right size when you need half a dozen of them. So I made a quick trip to the office supply store and bought a giant bag containing different thickness and diameter bands. There were just enough of the smallest, thinnest ones to do the project.

The bands wrap around both axles on one side of each car. It’s harder than you’d guess to get them wedged into place without any twisting. When I got to the Street Rodder, which has no fenders, I was relieved… until I realized with its short wheelbase, even the smallest rubber band was too long, so it had to be wrapped in a more complex pattern. 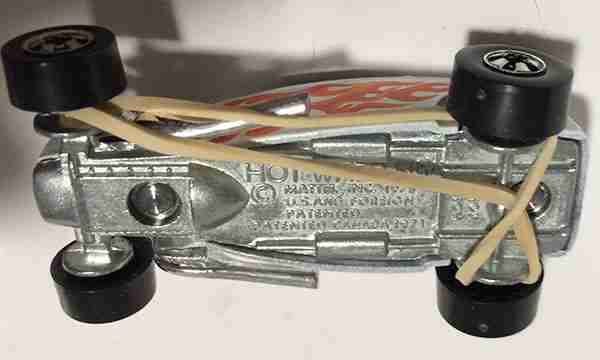 Wrapping the bands around the cutout would have been fairly easy if I’d just taken the whole dang thing out of the box like any normal person would have. But in place, there was limited room to maneuver. Also, the process required lifting the tab slightly, but not too much, or it would get a crease and then refuse to lay flat. I used a single blade from a pair of scissors (would that be one scissor?) as a guide to gently lift the tab, allowing the car and band to go where they needed. Each car took several minutes to wedge into place, because I am a masochist. 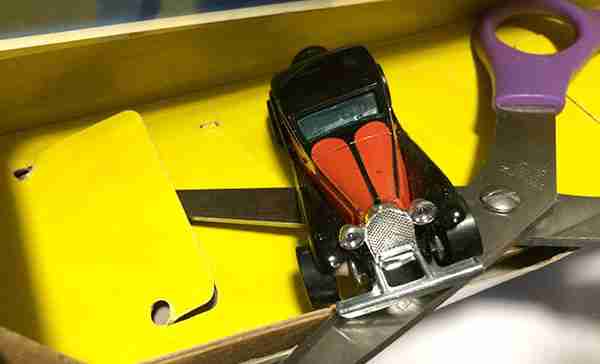 The long sides of the cardstock window cutout were severely warped. So before resealing then into their car-cophagus, I decided to adjust that. I wedged a small channel of cardstock under the top part to hold it up and on the bottom, glued a reinforcement strip where there was a small tear. It’s not perfect, but a huge improvement. Then I used a small amount of clear Goop adhesive to attach the window into place, sandwiching the front edge of the box together while it dried to straighten that up. 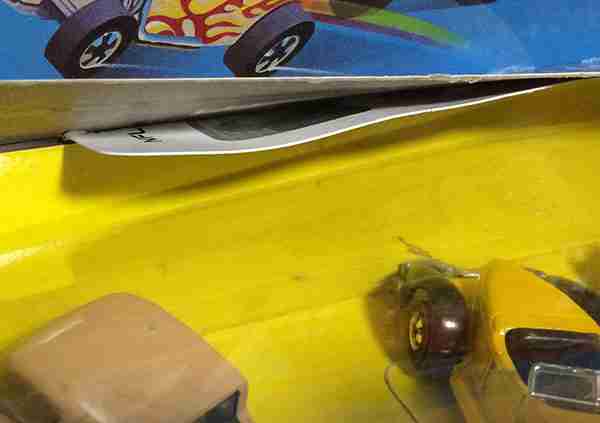 As for the top panel of the box, it flopped sadly forward. I bent it backwards until I heard a snap and then cringed to see… that it hadn’t ripped or creased or anything. Nope, just sits straight. Whew! There was also a dog-eared corner that needed attention. I put a very small dab of clear glue between the layers and held it straight with a clothespin until it was stiff. Not perfect, but better. Finally, I took a chance on removing the price sticker. Sometimes they only sort of let go, sometimes they remove part of the packaging (GAHHHHH!), but in this case, the whole thing popped off intact, leaving a slightly darker, less faded blue behind.

Finally, the set is ready for display. For a two dollar item plus a dollar for rubber bands, that seems like a lot of work. But if you have to ask a collector “why?” then you’ll never understand this hobby.

nice job! i,m a hot wheel collector off & on since 68 i have waited at auctions 8 hours just to get a pkg that was like yours * just a house hold auction* and with the work of the freezer {slightly} and patience the items come to life and bingo,money in hand,trading tool,talk about piece,etc…. so hats off to your GREAT find and the book price for your goods $2 well spent,as a collector true collector you always eat your time and gas that’s just the hobby!!! but the thrill of the score,the find NEVER goes away. happy hunting. p.s keep up the great work at hobby db.

Thanks! We enjoy our work because it often feels like we’re just doing our hobbies.