Painted in a Corner: Castings That Look Strange in Different Colors

Henry Ford supposedly said you could get a Model T in any color, as long as it was black. And even though you could easily paint one any color, it sort of looks weird when you do.

Toy companies have to think long and hard about dedicating time and money to creating a mold for a new car model… in order to get their money’s worth, they need to be able to offer a model in multiple versions. The easiest way to do that, of course, is by releasing it in Different Colors.

In some cases, the company might paint themselves into a corner with certain design decisions however. Here are some model vehicles that just sort of look weird in anything but the original hue: 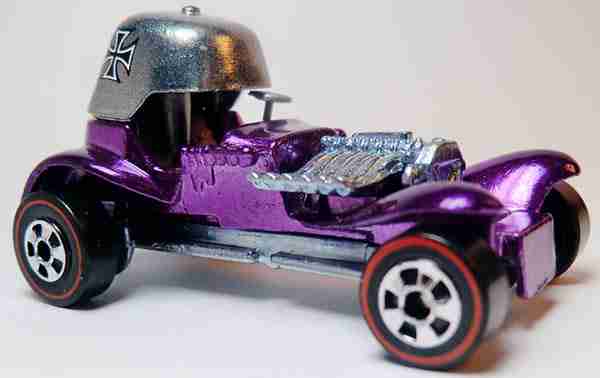 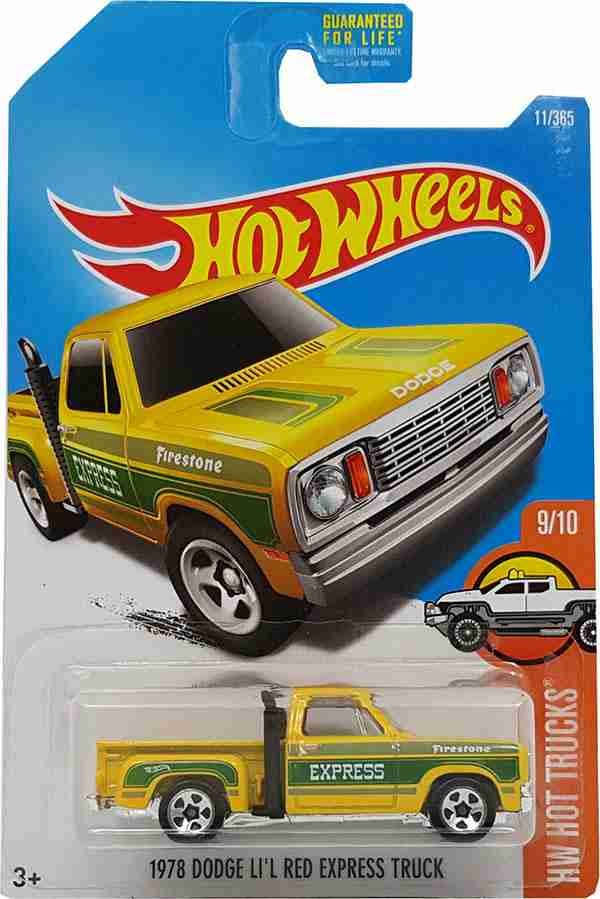 Red Baron: Based on Tom Daniel’s World War I flying ace hot rod, there’s really no other color this car could logically be. For the original release and the Flying Colors variant, Hot Wheels honored that commitment. Eventually, when the car was reissued for Hot Wheels’ 25th anniversary, they opened up the paint booth and offered it in a bunch of different tones, even painting over the silver hat in some versions.

1978 Dodge Li’l Red Express Truck: This vehicle is based on a real version of the 1978 Dodge truck, and it had that name for a reason. Hot Wheels took some liberties with the colors after the initial release. When you see one on the road, the stepside fenders, loud graphics, and working smokestacks are awesome to see… and they are always red in real life, darn it!

Purple Passion: There wasn’t a compelling reason to call this car “Purple Passion” aside from that being the color of the first version. Despite different future colors, the name has stayed the same except in a few cases… For example, the Treasure Hunt variant was renamed “Gold Passion,” the Pearl Driver series called it the “Pearl Passion,” and the Steel Stamp series was known as the (wait for it…) “Steel Passion.” A few other odd ones just dropped the color altogether. The woody wagon version retained the color in the name, but the convertible was called “Passion Too.”

Golden Arrow, Golden Submarine: These are both fairly modern castings sharing a colorful name. At least the Submarine initially came in gold before embarking on a rainbow journey; the Arrow has to this point never been released in gold. Okay…

Chaparral racers: No, that’s not a color. But to see a Chaparral in anything but white is kind of weird. The original Redline Chaparral 2G came in a surprising range of solid colors, and the newer Chaparral 2 has showed up with all kinds of graphics on it. 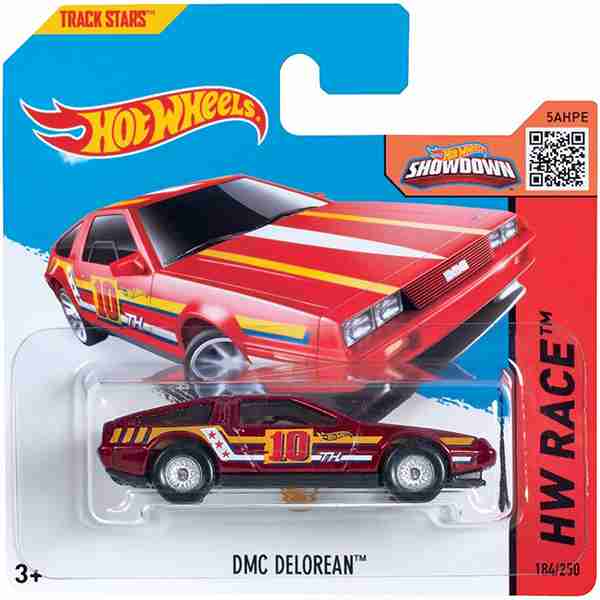 Jack Rabbit Special: This one is kind of strange… the Jack Rabbit Special was the star car from the Hot Wheels animated series, and as such, kind of needed to be seen only in white, preferably with blue stripes and maybe side graphics like on the show. That is, until the casting was renamed the Sand Witch, allowing designers to do whatever the heck they wanted.

DeLorean DMC: You could get a real DeLorean in any color as long as it was brushed stainless steel. Some people have painted theirs, and while they do look nice, that just ain’t natural! Hot Wheels has released a few differently colored DMCs as well, but most of their variants are related to different time travel options instead of colors. 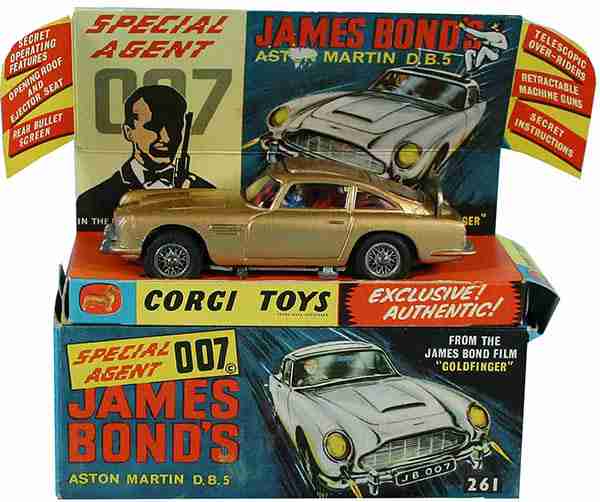 James Bond Aston Martin DB5: While a DeLorean is supposed to be unpainted, the folks at Corgi felt that the silver tone of James Bond’s DB5 was too close to unpainted Zamac and would look unfinished on a toy. So for their model of the most iconic of all the Bond cars, they went with gold instead. Later versions were done in the correct silver, but the gold version is so well known that it almost looks right.

Blue Monday: Moving to a different company and a larger scale, Kenner’s SSP cars originally came molded in six colors: red, purple, orange, magenta, lime green and light blue. Honoring  its name, the Blue Monday dragster was only available in that blue tone at first. When subsequent series were released, such as the Ultra Chrome cars and the Monster series, it became available in all sorts of colors (including a very nice chrome blue).

Black Jack: As mentioned above, the initial SSP cars were only available in 6 colors, but the Black Jack was the first to come in black. And only black. Toss in the molded red hourglass shape on the nose, and the car is often mistakenly called the “Black Widow.” As with the Blue Monday, the later chrome cars came in all colors (and the red bits were changed to black). The Monster series still came in black, this time with green spider graphics on it. 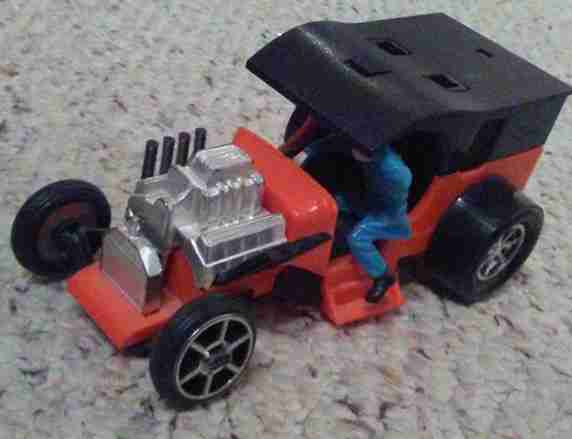 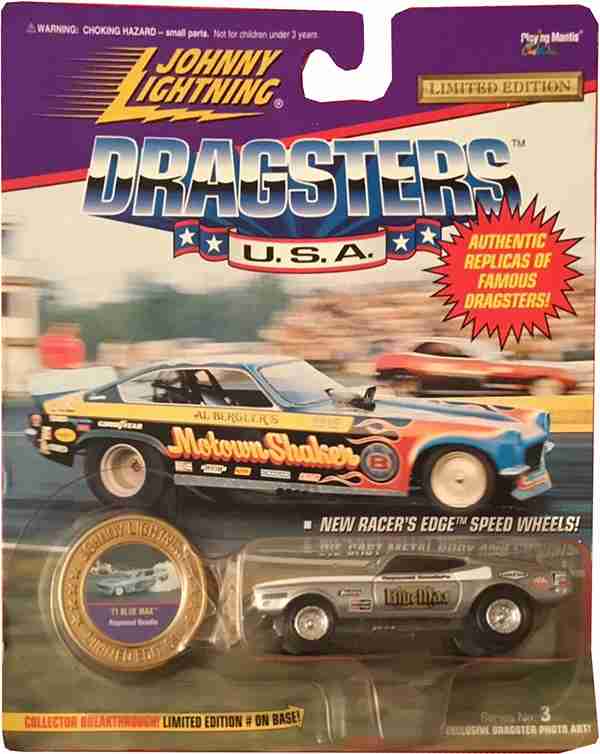 Copper Cart: Okay, this might be a bit of a stretch… the SSP Copper Cart was a Ford C-cab paddy wagon hot rod with a police driver figure, and it was available in all of those original colors. It looks most natural in blue, which seems to be the most common version. Sadly, this design was never offered in the chrome colors, one of which could be described as… copper.

Blue Max: Johnny Lightning’s Dragsters U.S.A. series featured miniature versions of many famous funny cars and Pro Stock racers, including the famous Blue Max Mustang. Most of the cars in this series were first offered in a color close to the real dragster, but were eventually produced in multiple colors, even the Blue Max. Bonus Fact: Another car in the series was called “Color Me Gone,” which should by logic be invisible. It was not.

Mach 5: If you’re going to make a model of the world’s most amazing animated race car, it can only be white with red and yellow graphics, right? Both Hot Wheels and Johnny Lightning did limited editions of Speed Racer’s car in chrome silver as well, which looks sharp and not too jarring. JL also did a bronze version calling it the Mach 4, which was available only by mail after cutting up half a dozen blister cards for proof of purchase seals. Many collectors were reluctant to damage their packaging, so the Mach 4 is fairly rare.

There are of course, many other TV cars such as the Batmobile or the Scooby Doo Mystery Machine that have presented similar limitations. I, for one, will be curious to see what Hot Wheels does to jazz up future releases of the Yellow Submarine.