These Hot Wheels Volkswagen Models are a Big Drag

Over the past two years, we’ve contributed articles to Die CastX magazine for publication on their website and in their quarterly print edition. We hope you enjoy the story of these bigger models of the microbus dragster.

In 1996, Hot Wheels introduced a casting that would become one their most iconic and sought after models since the early Redline cars. The Customized Volkswagen Drag Bus, a VW Bus funny car, was an instant hit with its heavy metal construction and reverse flip up body. Since it’s more expensive to produce than most models, many subsequent releases have been in premium range, enhancing collector values. The relatively flat sides and easy disassembly have also made it a favorite for limited editions and custom models. 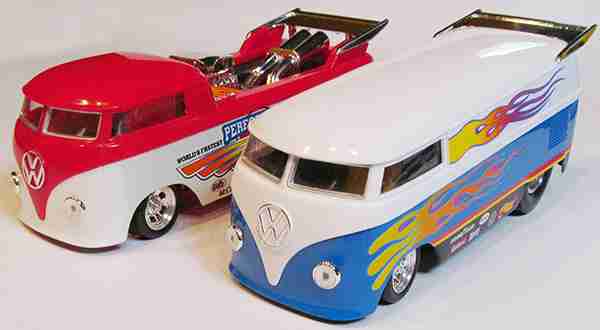 In 2000, when Hot Wheels was dabbling in 1/18 scale, they figured it would be wise to offer a larger version of the Drag Bus. As expected, the body flips open, still hinged at the front. Everything found on the original 1/64 Drag Bus is where you expect it to be, but gloriously huge and with surprising detail. The jumbo model is full of some great bits but a couple of head scratching decisions as well. 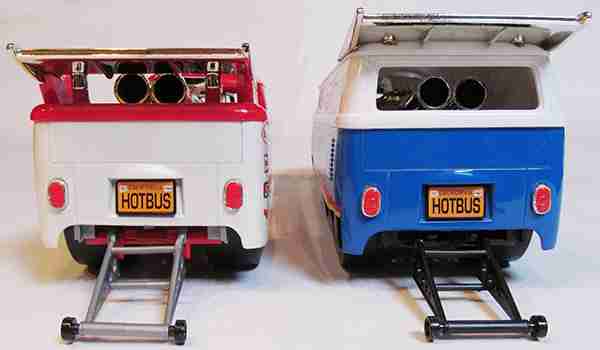 The frame is a nicely thought out metal structure that adds a lot of heft to the model (and it is heavy!) The cockpit is sparse (much like a stock VW Bus, come to think of it) yet the gauge cluster has detailed dials and the seatbelts are separate pieces.The steering has minimal capabilities, but since this is a dragster, going in a straight line is far more important anyway.

The engine has a lot of good detail and depending on which variant, multi colored parts. A complicated wiring harness is attached to all cylinders, which is a really nice touch. The rear slicks are massive and feel like they are solid rubber, so they roll with authority. 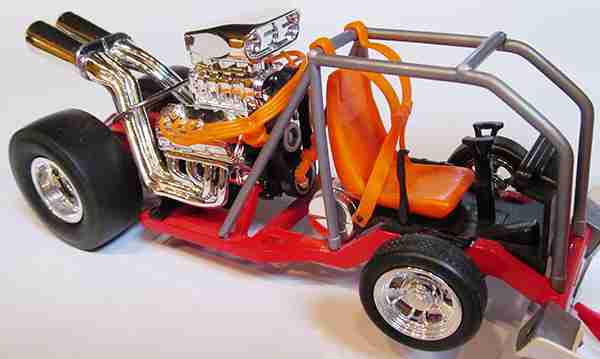 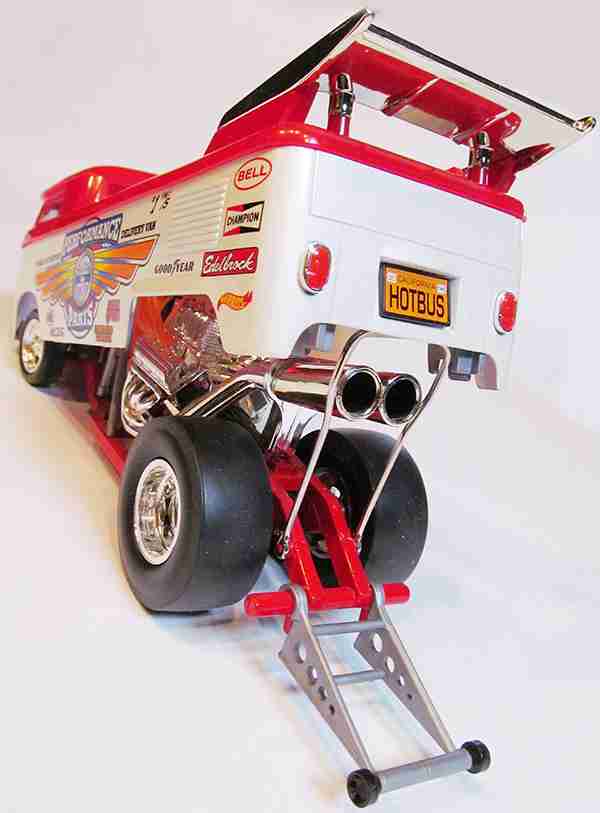 A few years after the initial 1/64 release, Hot Wheels came out with another utilitarian VW dragster, this time based on the Transporter pickup . In this case, the body did not flip open, but a clear bed cover did, revealing two engines.

The 1/18 Drag Truck, as it was called, was the same basic vehicle as the big bus, but the top half of the body has been swapped out for a pickup style cab and bed (and now you know why the top of the Drag Bus is a separate plastic piece!). Once the body is flipped open, there’s a built in support to hold the body up. The rest of the details are the mostly the same except they thoughtfully changed colors on almost every component and the blower on the top of the engine is a different style from the Bus. Since these models are easy to disassemble, components can be easily traded from one to another or repainted if you prefer.

Both of the large scale versions come with snap-on wheelie bar that does not quite live up to the rest of the model. It arrived in the package unattached, most likely to keep box size down, but when snapped on, it just looks like a cheap afterthought. Since the small model never featured this part, many collectors probably didn’t bother attaching it.

The large scale Hot Wheels Volkswagen Drag Bus came in several crazy paint schemes over its brief production time, but the Pickup only came in the wild version shown here plus a few single color variants that we can find. As nice as these models are sitting on display, there is something satisfying about opening and closing the body and zooming it around. You might find yourself making engine noises to go along with it! 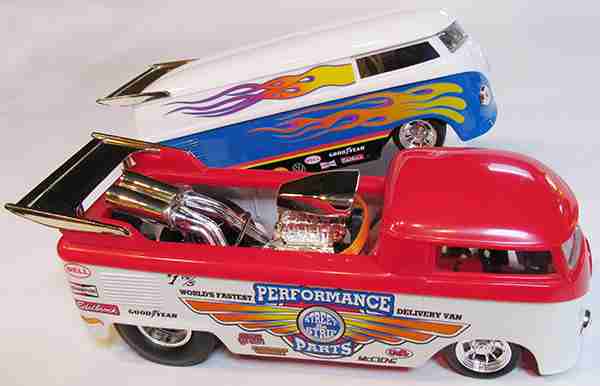