What I Learned From Toy Motorcycles: I Shouldn’t Ride One

Toy Motorcycles hold a curious spot in the world of miniature vehicles. Consider this: A toy car or truck, especially one with a closed cabin, looks ready to drive, and requires no assistance to stand on its own when stationary. But a motorcycle? It looks weird moving without a rider, and it can’t stand alone without a kickstand, a sidecar or training wheels. In fact, without any assistance from such things, the only way to make one scoot around was to hold onto it the whole time lest it fall. That’s a lot to engineer into a small toy. 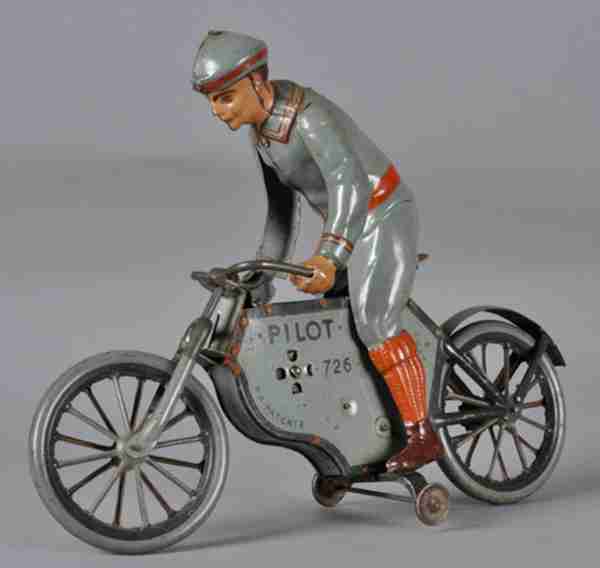 A typical tinplate motorcycle has at least three wheels, sometimes four. But it can’t go fast enough and far enough to sustain the momentum required to balance on two wheels for long. And that’s kind of disappointing. 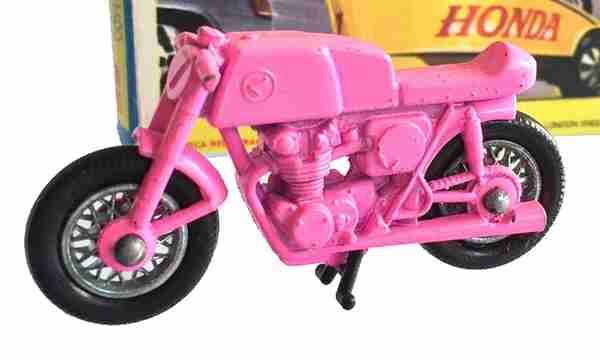 Matchbox offered some motorcycle models in the 1960 and ’70s, but most had a permanent, fixed kickstand. Even this Honda cycle with posable kickstand was designed primarily as a trailer load. The message was clear: You can look, but you can’t ride. 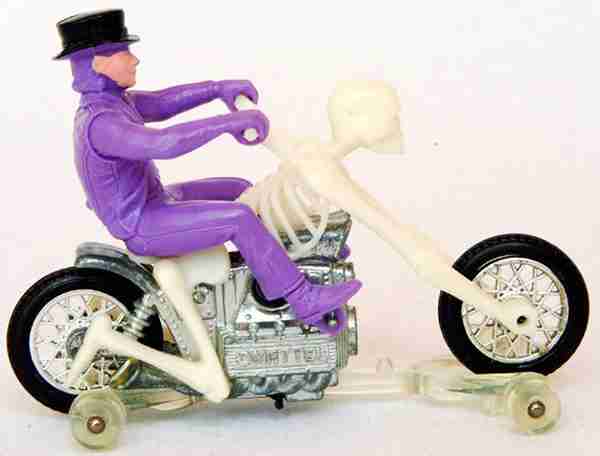 Hot wheels eventually offered a series of freewheeling cycles, the Rrrumblers, which could do all the things their cars could do: zoom down orange track, go over ramps, get buried in the sandbox. And they had cool removable riders, too. But like the earlier toys, they still required some assistance in the form of clear plastic bases with training wheels. Some had two wheels, but their three wheeled choppers needed assistance, or they would get squirrelly on the track. (Eventually, I figured out they could go downhill backwards without assistance, but who wants to ride that way?) 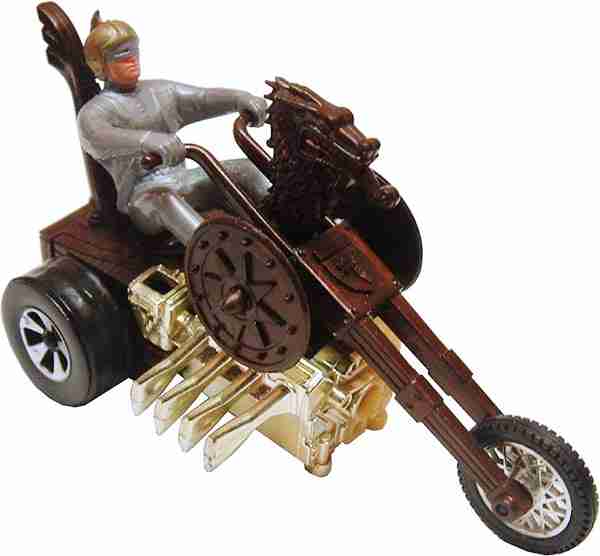 Mattel upped the ante when they added similar trikes (These were all 3-wheelers to accommodate the battery-powered motor) to their self-powered Sizzlers line. Instead of going in a straight line down a hill with some difficulty, The Chopcycles could go in circles and figure eights at high speeds before crashing even more spectacularly. These also came with a sled-like removable attachment to keep them pointed in the right direction. It should be pointed out that most of the rider figures wore appropriate protection (except for the fancy lad who wore a top hat and the other fellow in the newsboy cap).

Kenner’s SSP line offered a few motorcycles in the early 70’s as well. With their gyroscopic flywheels, they demonstrated how to ride balanced and without restraint, no training wheels, no sidecars… until they came to a stop by either falling over as they slowed down, or by running into something and slowing down instantly. The full gold racing suit and helmet was pretty cool, though. 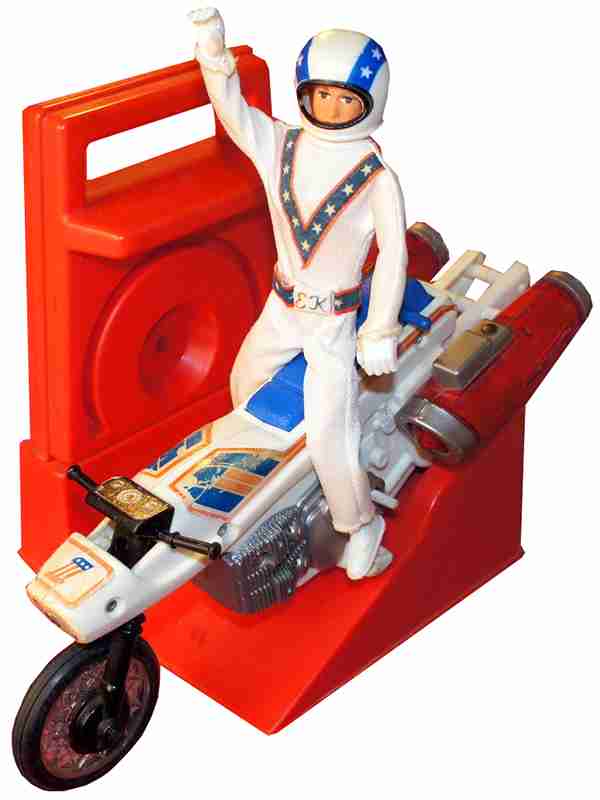 In 1974, Ideal came out with a line of toys that boys of a certain generation consider the all time champion coolest thing ever: The Evel Knievel Stunt Cycle. The commercials were filled with promise… enthusiastic boys cranked up their motorcycles with fury, the gears whining to a loud, high-pitched shriek. And suddenly, the bike shot off at great speed! They showed it on pavement. And on dirt. And jumping!!! And perhaps as a warning, crashing, causing a floppy-limbed rider to go flying and landing in a heap!!!!! And when I got one for my birthday and tried it for the first time… It was even louder and more chaotic and more exciting than promised!!! And the harm that came to Evel was even more real. Mine even suffered a gash on his nose when his helmet ended up sideways on his head after a crash. Never mind the carnage Evel would inspire on a regular street bike, the series quickly expanded to include jet-powered bikes and dragsters. 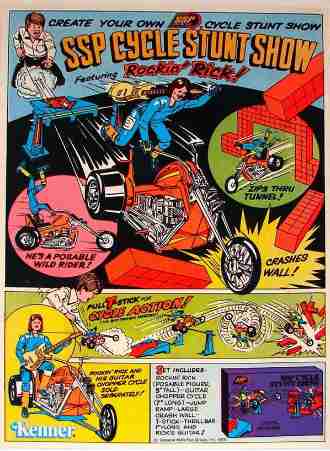 In the late ’70s, SSP offered a new series of cycles, this time resembling street bikes, with posable riders. The drive wheel was hidden in the middle of the bike, so they really had three wheels, (or four for chopper trikes) this time in a line. But the riders clearly cared more about looking cool than they did about safety. Sure, boys wanted to be Rockin’ Rick and girls wanted to be with him, but his long flowing hair and ill-secured guitar sent a questionable message about responsible cycling.

So what did I learn from all these toys? Ride too fast, you will crash. Ride too slow, you will crash. Training wheels look silly. Wearing a helmet is a good idea, unless you have long, flowing hair or a top hat, in which case, you ride at your own risk.

I’ve ridden a motorcycle exactly once since: It was a friend’s dirt bike, and I wore a helmet. The sudden acceleration from standstill caused the bike to do a wheelie, dumping me off the back in seconds. Somewhere Evel Knievel is shaking his head.

I had some of those Rrrumblers,as a kid.  Sorta weird but I like that you could take the training wheels on and off.  Never tried to race ’em though!  🙁