The Goldvarg Collection of model cars is the latest addition to the official archives at hobbyDB. If that name sounds familiar, maybe it’s because you know Sergio Goldvarg as the world record holder for the biggest collection of large scale model cars. Or that he has a collection of George Barris TV Batmobiles in every scale (including a real, drivable one). Or that he is a member of the hobbyDB Advisory Board.

Besides all that, however, he was the founder of a company best known for producing models of American cars from the 1940s and 50s, The Goldvarg Collection. 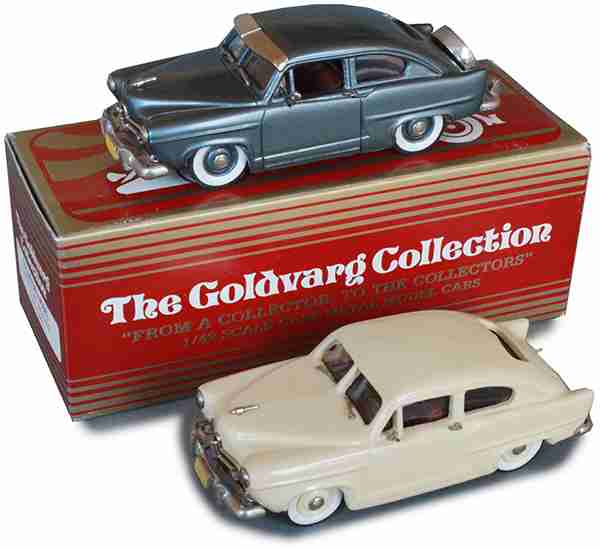 Sergio was born in Buenos Aires, Argentina and fell in love with Matchbox cars at an early age. His very first one was the Matchbox Merryweather Marquis Fire Engine, which he still owns today with its original box, and in perfect shape. But when he was six years old, he received a 1/43 scale Solido Jaguar D-Type, and his fever for collecting took off. While he is best known for his large scale collection, he has countless 1/43 scale cars, and his own products favored that scale as well. By the age of ten, he was buying damaged, even nearly destroyed model cars and restoring them. “I came up with an interesting idea,” he said. “I began placing ads in the local newspapers offering to buy used miniature collections. I would restore each of the models and offer them to the shops in my neighborhood. Soon I had enough money to buy my own toys and collectibles.” 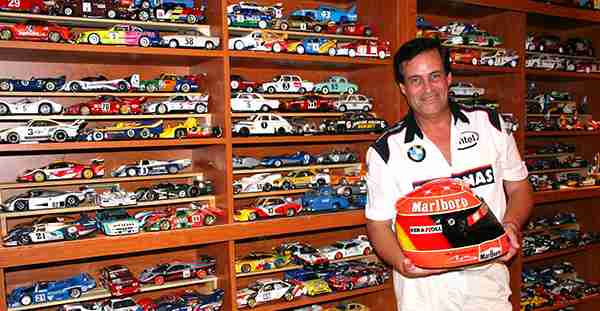 Sergio with just a tiny fraction of his large scale diecast collection.

His next jobs, as an auto racing journalist (he would also later be involved in the organization of the Argentine Grand Prix), and an architect, related to his passion for cars and design as well. “I was the first journalist in South America to write weekly about diecast cars,” he said. His model car column ran in Corsa and Parabrisas, (two well-known South American motor racing magazines) and later Classic Wheels magazine. He still writes today. 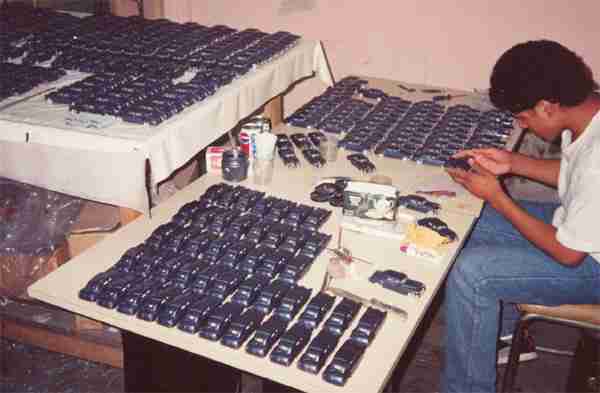 Goldvarg Collection models required quite a bit of hand assembly.

As his collection grew, he also served as an Advisor for Buby, an Argentine diecast manufacturer.

So all that passion and experience eventually led him to start his own model manufacturing company, Miniturbo, in the 1980s and it featured all sorts of vehicles, trucks, vans, pick-ups and buses, which he designed himself.  These were created primarily as toys for younger kids, but he decided to try his hand at something geared more for collectors. 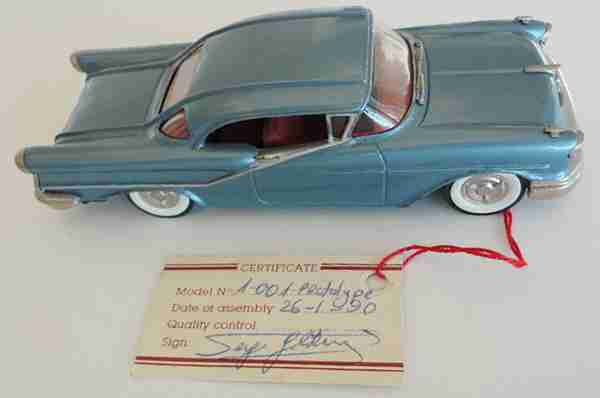 Thus was born the Goldvarg Collection, the first 1/43 diecast cars produced in South America. “Back in those days I was blown away by the beauty and conceptual design of 1950s -’60s American cars,” he said. “To me the British white metal models were the best, but their line lacked some of the items I treasured the most, such as the 1957 Oldsmobile Starfire Coupe. I loved its sexy lines. So the time had come to create my own scale line of models. That Starfire was the basis the first offering in his new line, one year after he set out to start the company.

His mission was to produce models of cars that he loved, but that had never been manufactured in any scale. In fact, the slogan for his company became, ”From a Collector, to the Collectors.” Some of his models, such as the Kaiser Henry J, and the Packard Woodie Station Wagon 1948 (with real mahogany wood in the sides!), were best sellers when compared with other well-established brands, so his hunch was correct.

He took that first model to Autofanatics, a store in Sherman Oaks, California.  The owner immediately ordered 100 units, and collectors that were in the store at that moment wanted to buy it regardless of price.

In the early 2000s, he moved to the U.S., where among his other tasks, he opened the first “scale model cars related restaurant.” Waffleworks, in Hollywood, Florida, has a permanent exhibit of nearly 900 of his model cars. His idea was to share part of his diecast collection in a place with a unique atmosphere. And serve great breakfast all day! 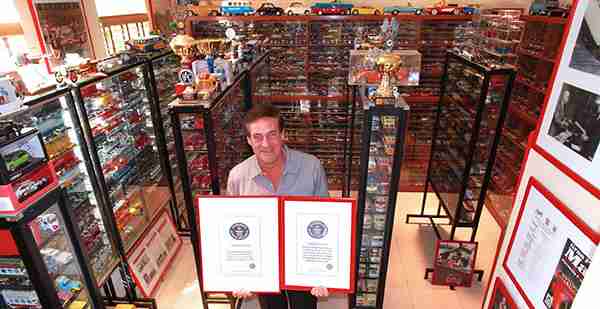 Since 2004, Sergio Goldvarg has been the New Product Development Advisor for Sun Star, working mostly in 1/18 scale. He has helped develop such models as the 1952 Nash Ambassador, 1958 Ford Fairlane 500, 1960 Plymouth Fury, 1956 Mercury Montclair, 1955 Pontiac Star Chief, 1959 Pontiac Bonneville, 1951 Kaiser Henry J, 1959 Mercury Park Lane and 1959 Oldsmobile. Over the last decade or so, Sergio has worked with several model car companies such Sunstar.  In 2011, he wrote a history of Carlos Pairetti, a famous Argentine motor racing driver.

With all that on his plate, we’re glad and very fortunate that Sergio has the time to be on our Advisory Board as well.  While he was never able to put a complete archive of Miniturbo vehicles online before some of them were lost to history, he jumped at the opportunity to document the Goldvarg Collection. You can see the complete archive here.