A Brief History of Lego Colors

A Guest Blog Post by Ryan Howerter
I am a graphic designer and AFOL from Fort Collins who has been doing more collecting and cataloguing of rare LEGO parts than building, lately. I’m fascinated by the rich and at times confusing history of the LEGO brand.

[In this brief history of Lego colors, I use the BrickLink names of colors, since they are the names most commonly used by AFOLs. TLG’s IDs follow in parentheses, since they are much more precise. Colors not recognized by BrickLink are in quotes.]

If you had to guess, how many colors would you say LEGO® bricks originally came in? Most people recall just the basics: Red, White, Blue, Yellow, maybe Black and Green. Maybe you’re thinking of the Town Plan sets from the early 60’s, which also had Trans-Clear. The palette started nice and simple, only to continually grow over the years, right?

Not quite. When The LEGO® Group (TLG) started producing plastic bricks in 1949, they did have the basic colors, but also a wide variety of color variations and unusual hues. These earliest bricks don’t look like today’s bricks—they were (usually) made of Cellulose Acetate (CA), lacked connecting tubes, and didn’t even originally have the LEGO® logo anywhere—but they will still connect to modern bricks, if you can find them in good enough condition. In these early years, TLG was feeling out what worked and what didn’t, meaning odd plastics and inconsistent colors. 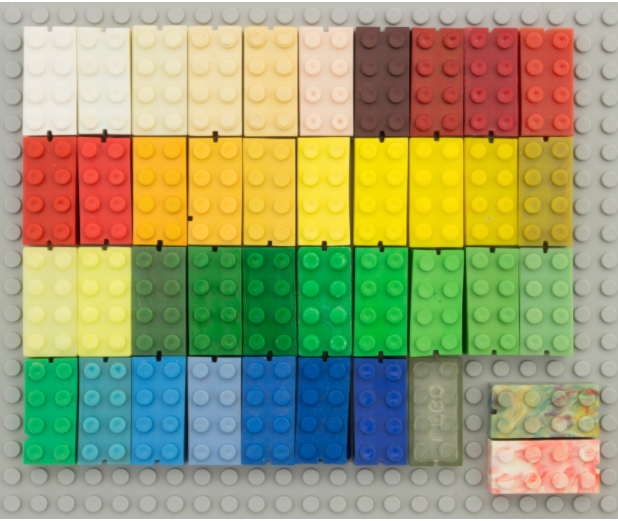 We don’t have a complete history of these early bricks due to box contents being switched around over the years and molds moving from one factory to another. Toy stores sold individual bricks at the counter, sometimes in rare (not-in-sets) colors. TLG employees would even sweep up the factory floor, and use the dropped pellets to make rainbow marbled bricks, which sold for pennies. (These “defects” today can sell for $40 each!) We do know that by 1955, the slotted brick color palette had been standardized to mainly Red (21 Bright Red), White (1 White), Blue (23 Bright Blue), Yellow (24 Bright Yellow), Green (28 Dark Green), and Trans-Clear (40 Transparent). Black (26 Black) didn’t reappear until 1960.

In 1954/5, the slots were removed from bricks, and the Town Plan theme was introduced. For the most part, bricks from these sets only came in Red, White, and Clear, though there were baseplates in Light Gray (2 Grey), and Blue/Yellow/Green bricks in a handful of rarer parts packs. 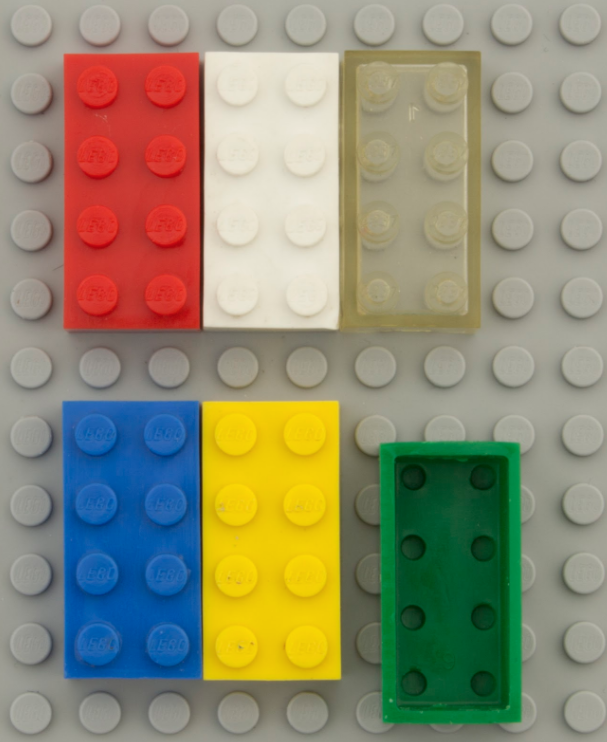 In 1958, the tubes that help LEGO® bricks connect were invented, and the first “modern” bricks were produced. This was the development that differentiated LEGO® bricks from the many other building toy makers in Europe—particularly from Kiddicraft, which directly inspired the original hollow slotted LEGO® bricks. At this point, TLG was able to patent their basic 2×4 brick design. Beginning in 1963, TLG finally switched to Acrylonitrile Butadiene Styrene (ABS) for their bricks, which is the same material they use today (plus or minus some additives). ABS is harder than CA, held its color better, and didn’t warp or shrink over time. 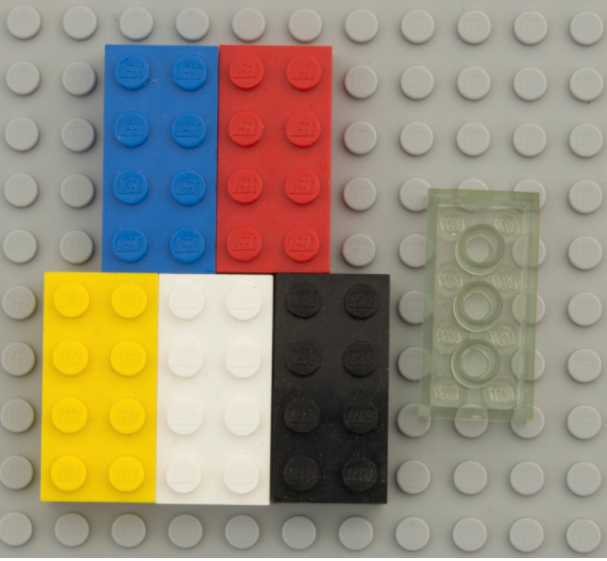 In 1963, TLG introduced Modulex, a smaller version of LEGO bricks intended for professional use by architects and workspace planners. Modulex could easily take up its own article, but I mention it here because many of the original muted Modulex colors were used (much later) for regular LEGO® parts, using the same color IDs. The second wave of Modulex colors, starting in 1983, consisted entirely of proper LEGO® brick colors. (The third and fourth sets of Modulex, in 1993 and 1998, did not match LEGO® colors at all—by that point, Modulex had branched off as its own company.) 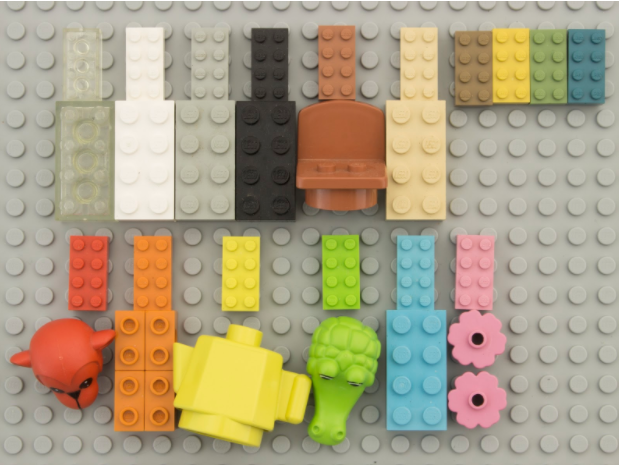 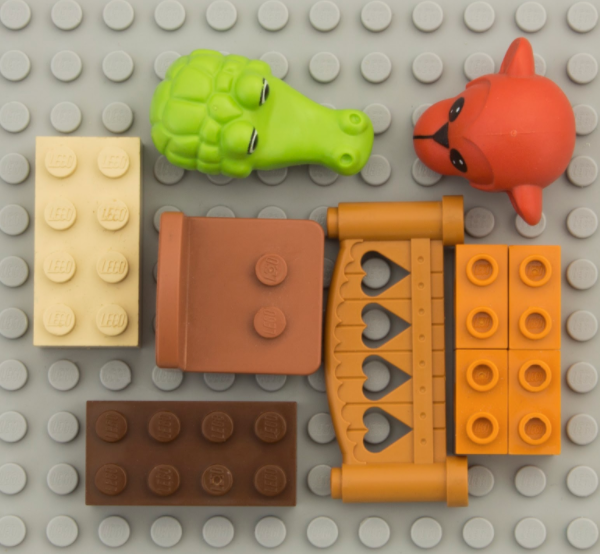 Beginning in the late 1990s, TLG’s color palette expanded rapidly, thanks at first to bright themes such as Belville and Scala. It grew much worse in the early 2000s, when it was common for a new color to be used only in one part in one obscure Duplo set. The need to maintain this large amount of resources, combined with several desperate themes that didn’t fit the LEGO® brand*, nearly drove TLG to bankruptcy.

TLG’s first attempt to “fix” the palette came around 2003. After a series of focus groups, TLG determined that children overwhelmingly preferred brighter, more vibrant colors. They replaced many colors with new versions—most notably the grays, which caused an uproar in the AFOL community among those who had built up a lifetime’s collection of the old colors. Light Gray (2 Grey) became Light Bluish Gray (194 Medium Stone Grey), Dark Gray (27 Dark Grey) became Dark Bluish Gray (199 Dark Stone Grey), and Brown (25 Earth Orange) became Reddish Brown (192 Reddish Brown). At least 10 other colors changed as well, but they were seldom-used and went largely unnoticed.

­In the late 2000s, TLG began mixing their own ABS colors from raw granulate (instead of outsourcing their color mixing to Bayer and receiving pre-colored ABS pellets). Though this gave them more control over their own product, it took a while to stabilize the color quality, and for several years, brittle or milky parts were a frequent annoyance. For the most part, this is no longer the case. Dark Red (154 Dark Red), one of the worst offenders, has even been renamed to 154 New Dark Red, to signify the improvement in consistency. 131 Silver became 315 Silver Metallic, and 148 Metallic Dark Grey became 316 Titanium Metallic, for ostensibly the same reason.

Since the 2003 color change, TLG has minimized their palette to a carefully-selected few colors. The Friends theme in 2012 introduced several new pastel colors, but they were all unique, without any glaring redundancies. TLG has since focused on using these colors in a wide variety of bricks, plates, and other useful parts, making them much more useful.

Since then, the only colors introduced have been existing colors with metallic additives, which are likely much easier to add to the palette and cheaper to maintain than a brand new color formulation. 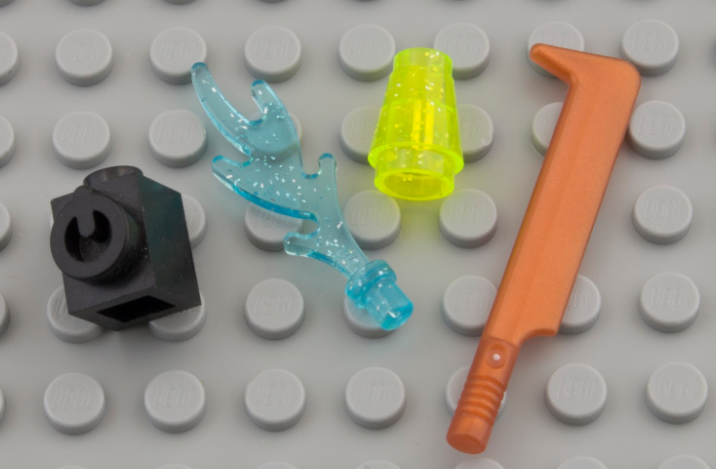 Even if there aren’t many new colors, there seems to be an unending supply of old colors to find. Recently it was discovered that the hair from 1974 Homemaker sets and 1969 granulated trees each used a unique shade of brown (we still don’t know the TLG IDs—if there ever were any). If we assume that TLG doesn’t leave gaps in their color numbering system, then we still are missing nearly all colors between 50 and 99. Discounting the numbers for CMYK ink colors, the highest number we know of is 339 (Transparent Fluorescent Green with Glitter). My own color chart only has around 200 colors—time to search for more!

*See Galidor and Jack Stone. Bionicle actually sold extremely well, and has been credited as the theme that saved LEGO.

I had to google to see what an AFOL is!  Obviously I am not one!  🙂  But I do love their old HO scale cars and trucks.  Not to mention the larger 1/43 trucks…

I love those too and we have 99% of those documented.  They were introduced as by their Danish name “System i Leg”

We moved  house in London in 1965/6.  The kids up the road had a FANTASTIC Lego collection – because their dad worked for Lego.  I think I was told the red & white was for the colours in the Danish flag and the yellow and blue I hadn’t seen before were for the Swedish flag.  True?

No, I don’t believe that’s the case. The usual — possibly apocryphal? — explanation is that Ole Kirk was inspired by Piet Mondrian’s paintings. That doesn’t account for green really, since it isn’t a primary color; but Lego didn’t make many green bricks during the Town Plan to Samsonite eras anyway. I don’t believe Sweden would have had much of an impact on Lego’s identity and branding.