“Win on Sunday, Sell on Monday” became the unofficial slogan of NASCAR back when the word “stock” actually meant the race car had some connection to the regular street version. With the Daytona 500 kicking off the Winston Cup… I mean Nextel… er, Monster Energy Drink Cup, this weekend, we decided to look at some promotions related to the race.

Now some of you kids might be too young to realize this, but the retired Hudson Hornet played by Paul Newman was not just a character in a Pixar movie. Hudson was the cool car to own back in the early ’50s, with its sleek shape and low roofline. Their early success on the track made its way into advertising (just barely, anyway), but it wasn’t enough to save the marque. They merged with Nash-Kelvinator and eventually became part of American Motors. 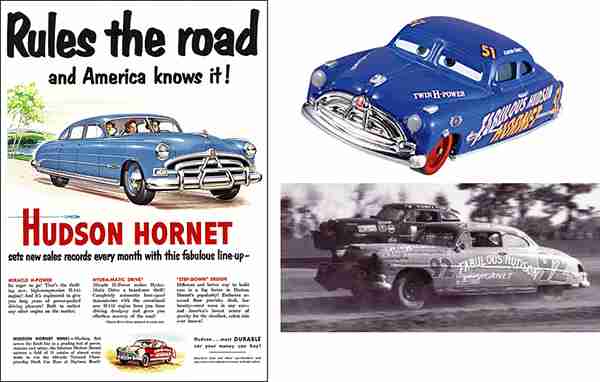 In fact, a lot of the early racing oriented advertising in the 1950s was subtle. If you didn’t read the text, you would have no idea that the Chrysler 300 was the car of choice for MOPAR drivers. 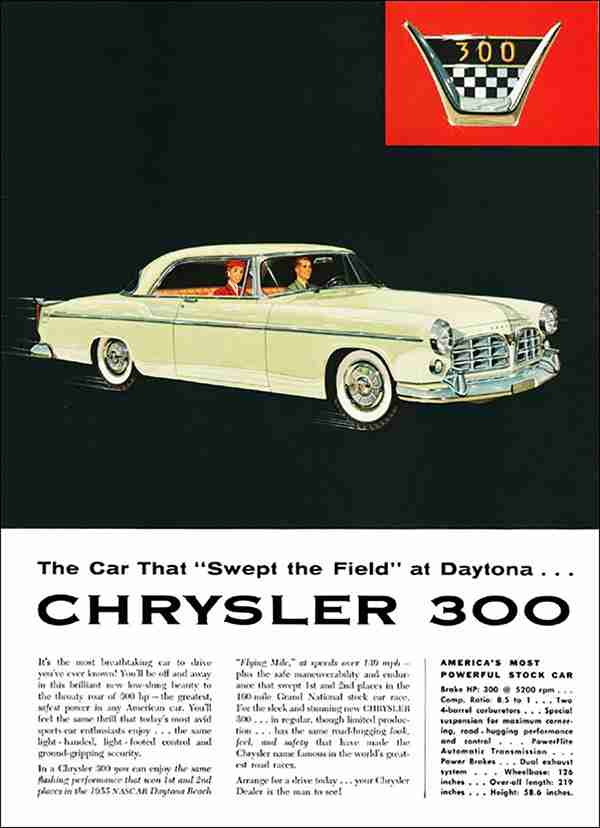 In the early 1960s, auto manufacturers were facing pressure from Congress and various safety groups to be more responsible with their marketing and image building. By 1963, all American car companies formed a “gentleman’s agreement” that they would stop engineering and promotion of any cars specifically for racing. As such, there aren’t a lot of ads from that era from car companies themselves. 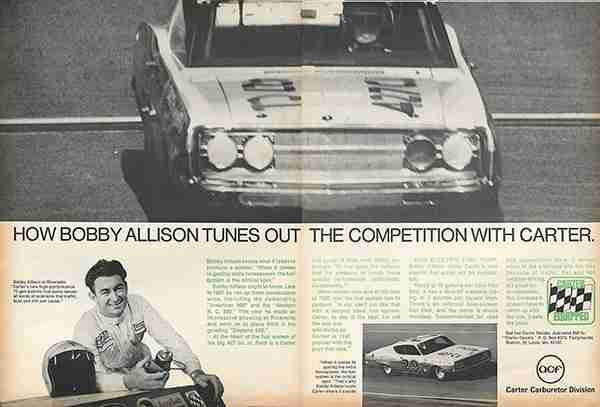 The sponsors and parts suppliers proudly touted their efforts, however, which is why you see mostly ads like these from Carter Carburetor and  Sun Electric Tachometer during that time. By the end of the decade, government pressure was off, car companies were back in the race, and ads revved up again. 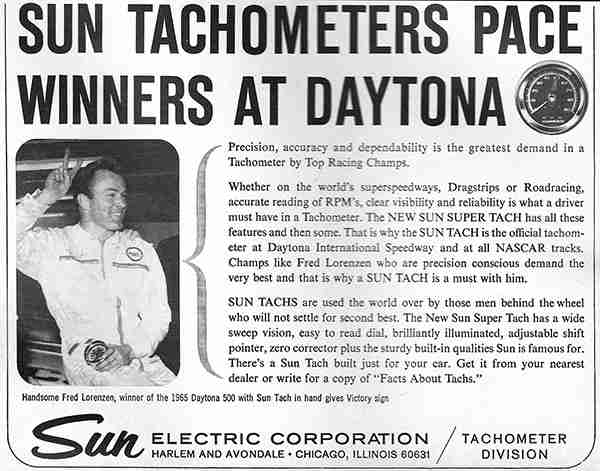 Take a look at these next two ads for the Dodge Charger. One is the Charger R/T, the other the Charger 500, as in  “Daytona 500.” The most obvious difference is the 500’s smooth fascia with the headlights out front instead of in deep recess. Remember when stock cars were basically stripped and hopped up a bit for racing? This was the beginning of the era in which auto manufacturers started to make unique modifications for aerodynamics purposes. To keep things fair, NASCAR imposed rules regarding minimum production numbers for cars if they were to be allowed on the track. So Chrysler had to make a certain number of cars with this aero change in order to race it. Since companies often produced only the bare minimum number of these cars, such “homologation specials” are often very rare as street cars. 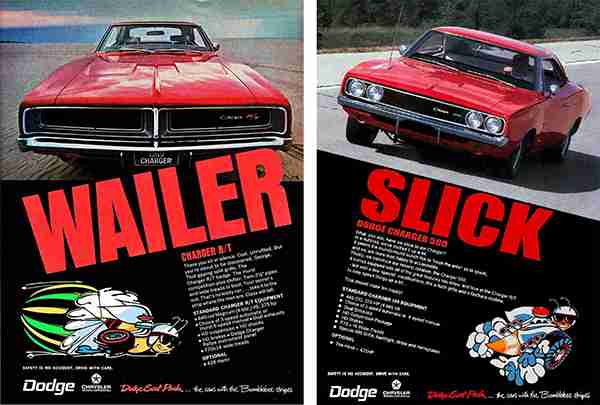 The peak of this trend came in the “winged warriors” era when the Dodge Charger morphed into the Daytona and the Plymouth Roadrunner became the Superbird. Both cars wore long nosecones and tall rear wings, legal because Chrysler made the minimum required street cars with those options. Sales were miserable at the time, but now you’re looking at six figures to even get a beater ‘Bird. At least there are tons of miniature models to choose from, including this groovy Richard Petty kit from Jo-Han. 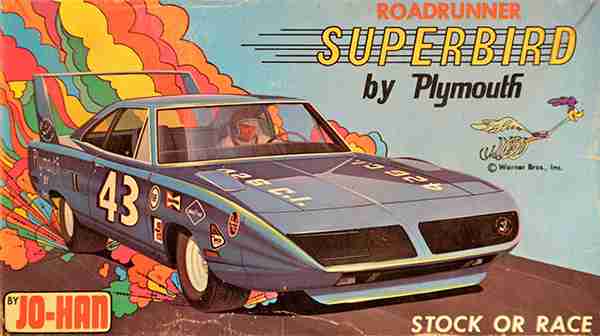 The mid 1980s were the last hurrah for race cars that could be called “stock” with a straight face. Even though the body work used much of the original sheet metal, and some drive train components were factory spec, the cars were sharing fewer and fewer parts with their street counterparts. The black number 3 car in this ad for Winston cigarettes (That’s Dale Earnhardt’s car, of course) was one of the last homologation cars, with a special nose and fastback rear window. By the 1990s, not even the lugnuts were the same as production cars. Tobacco advertising was getting pinched as well… in a few years, Winston would surrender the keys to sponsoring the series. 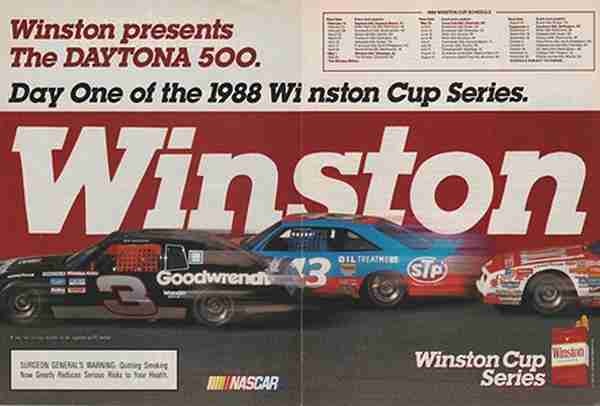 Still, the image of racing was a powerful selling point, even it had become just a marketing gimmick by then. In reality, Chevrolet had as much to do with Jeff Gordon winning a race as DuPont (He won the 500 three times, by the way). . Ads geared to sell you a car just like the one on the track pretty much disappeared. Merchandising, especially model cars, was revving into high gear by then. 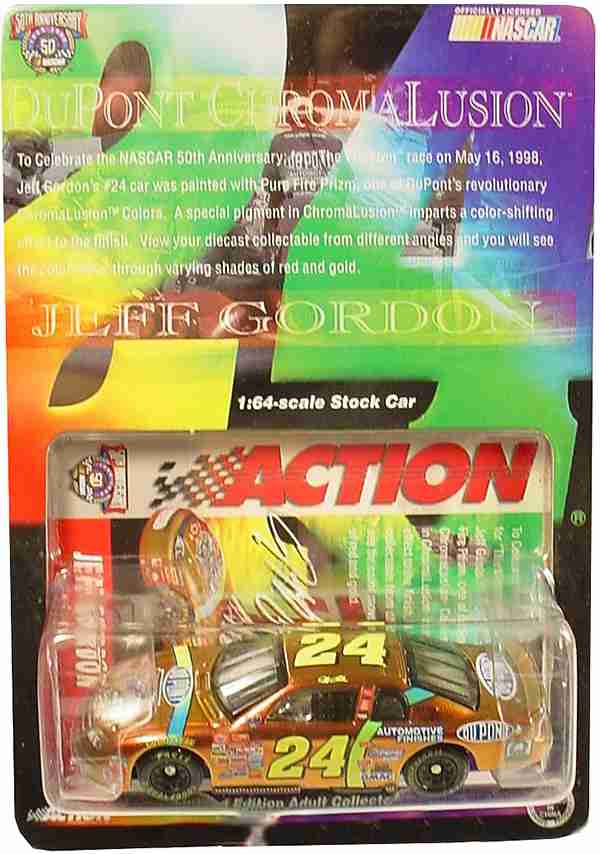 Daytona 500 related advertising took a grim turn in 2001 when Dale Earnhardt died on the final turn of the final lap of the race. Oreo had been running a promotion offering a limited edition 1/64 model of the Intimidator’s car with proof of purchase and a few bucks. After the crash, they sent letters to anyone who had requested the model, stating that there would be a delay, but that they would still honor the deal. The model is somewhat rare, but the letter makes it a more valuable, albeit more sad collectible. 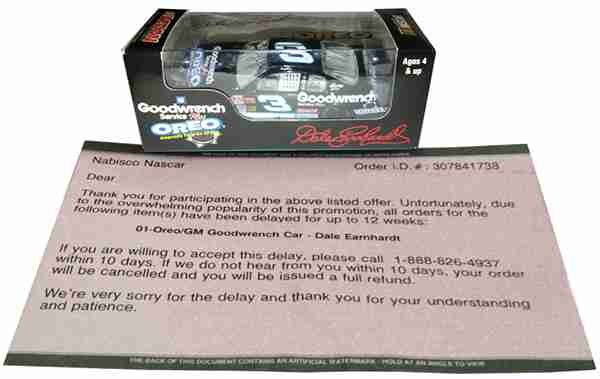 What are your favorite Daytona collectibles? Let us know in the comments!