The Most Expensive Cars Ever are More Affordable in Miniature

We recently stumbled onto a list of the most expensive cars ever sold at auction, all of which you’ll likely have to valet, name, and put to bed with a few bedtime stories. If you don’t have a few million to spare on one of these beauties but still want to swoon, there are affordable models you can find on hobbyDB of just about every car on the list. 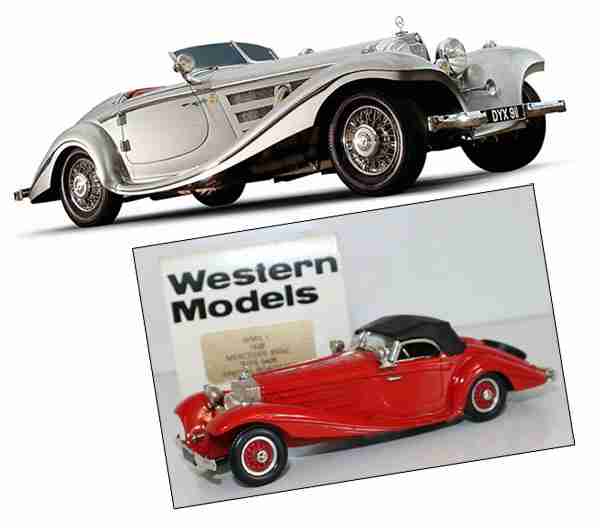 Once owned by Bernie Ecclestone, head of Formula 1 Racing, this car was one of only 26 ever built. There are several options to choose from including a 1/43 white metal version from Western Models, which usually sells around $100-125.

This was the first car ever built by Rolls and Royce together, with a 1.8 liter engine cranking out a whopping 10 hp. (A modern Mini Cooper has an engine about that size and puts out over 10 times that power.) We haven’t found any models of this exact car, but there is a four seat version of the 1905 car that doubled the horses to 20. Airfix made a 1/32 scale model kit of it, available in different packaging for about 30 years. 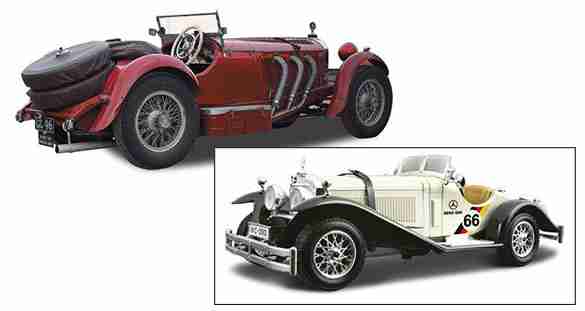 The SSK is one of sleekest cars of its age, longer and lower than many other roadsters from the time. With very few mods (mostly involving removing unnecessary annoyances like running boards), it was an outstanding race car. While there are several models available, probably the best-known one comes from Bburago in 1/18 scale. There’s even a Mickey Mouse version… 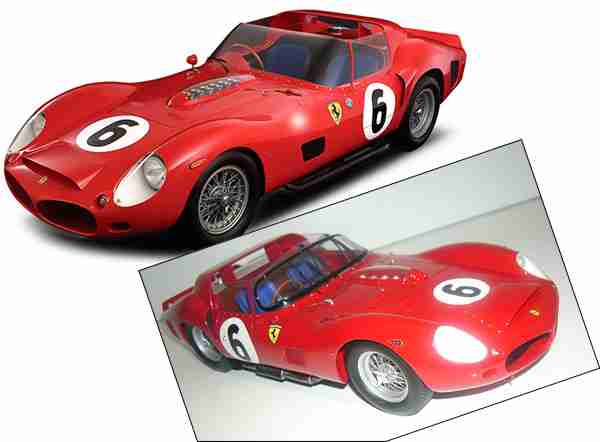 The one shown here was driven to victory at LeMans in 1962 by Phil Hill. So yeah, there’s a premium to be paid for pedigree. There are fewer models of this car than you might expect. This one is from Looksmart in 1/18 scale. 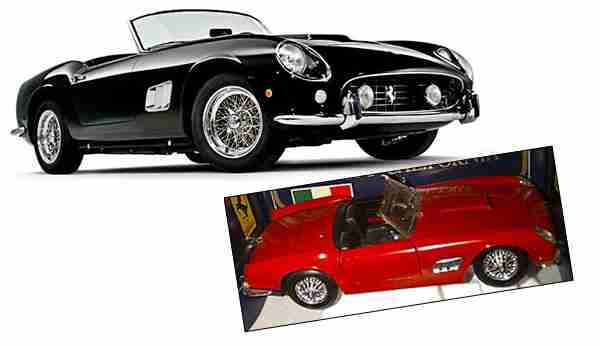 Nothing noteworthy about this particular car aside from the fact that it’s rare and beautiful and fast and once owned by actor James Coburn. There are several models of these available including a nice 1/18 offering from Polistil, who are usually known for their smaller scale cars. 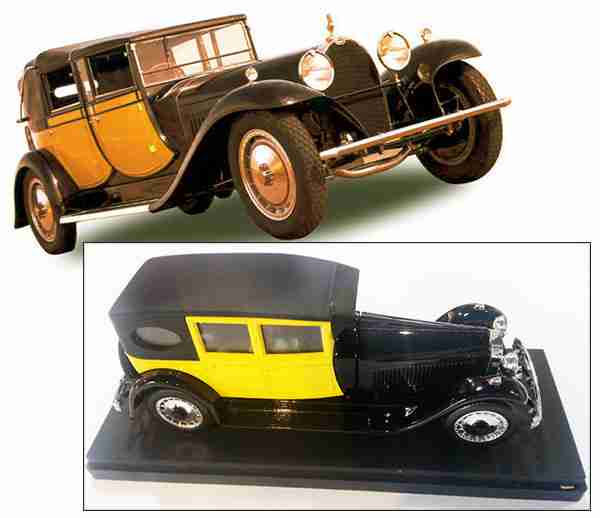 Long before Bugatti became an ostentatious modern supercar, the name was bestowed on ostentatious luxury coupes. sedans and Phaetons. This particular one was owned by the Bugatti family, so again… pedigree has a price. There have been numerous models other Bugattis, but not many of this style. This similar fixed roof model from Rio is about as close as you can get to the real thing, and at $13.99 it’s a bargain even in 1/43 scale. (Or, if you like a project, you can acquire this one for less and restore it.) 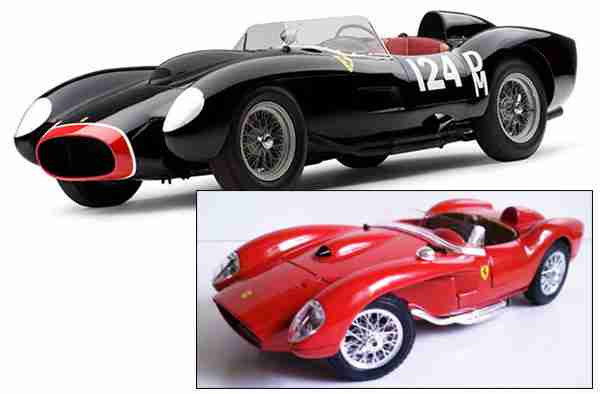 Underneath that sleek, dripping coachwork is a V12 that is often described as the best-sounding Ferrari ever. Bburago brings you several smaller, quieter versions in 1/18 scale. 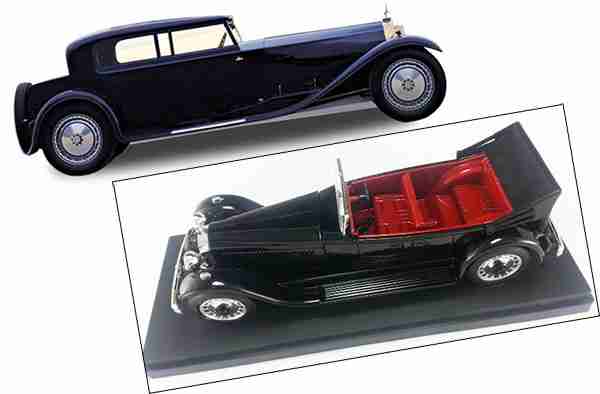 Long, low, and sinister looking, and powered by a 12.7-litre aircraft engine, the Kellner was too expensive for a car launched during the Great Depression. As it turns out, it would have been quite an investment if you could have held on for another 75 years or so. There have been models of similar vintage Bugattis including this 1/43 droptop from Rio. 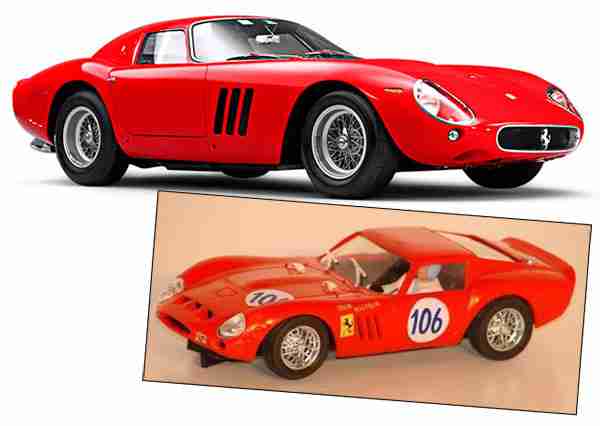 One of the most iconic and recognizable Ferraris ever, there were only 36 of these ever built. But there are lots of models, thank goodness. So how ’bout a version you can actually drive? This slot car from Pink-Kar clocks in at 1:32 scale. 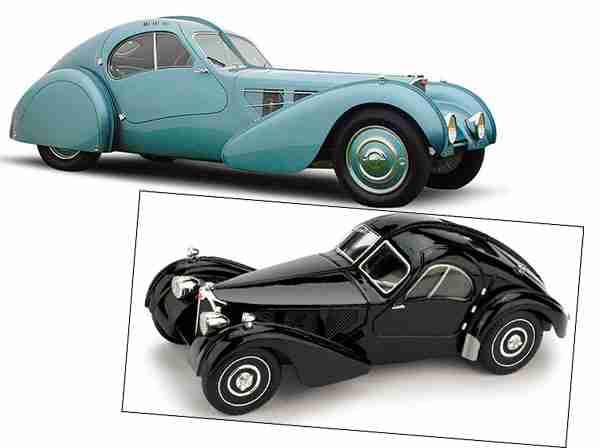 This is the Bugatti that everyone recognizes from their early days… a low, swoop Art Deco sculpture on wheels. Only three were ever made, so they tend to be expensive. There have been far more models of it, of course, in several scales. Here’s one from Brumm Revival for around $45, which scaled down, is pocket change by comparison.

Do you know of any other record-smashing auction cars that we also have in our database? Or other versions of these models that are even closer to the real ones? Let us know in the comments!