What are Beanie Babies Worth? Whatever Someone Will Pay

Collectibles sometimes go through a life cycle like this: extreme popularity, followed by rising values, followed by a bursting bubble, then maybe even a backlash, then a total lack of interest, then a retro-inspired spike in curiosity, then valuable classic status again. In other words, something will often be cool and popular, until it isn’t, until it is again.

We mention this because it’s been almost 20 years since Ty Beanie Babies abruptly ended their original production amidst the hype of being too popular. Wait, what? Well, the stuffed toys started out kind of rare, which sparked great interest. Also, each design was eventually “retired,” meaning the supply was cut off forever. Collectors were willing to pay a premium to complete their collections, and the increased interest convinced Ty to release more and more stuffies faster and faster. The craze looked unstoppable. Observe: 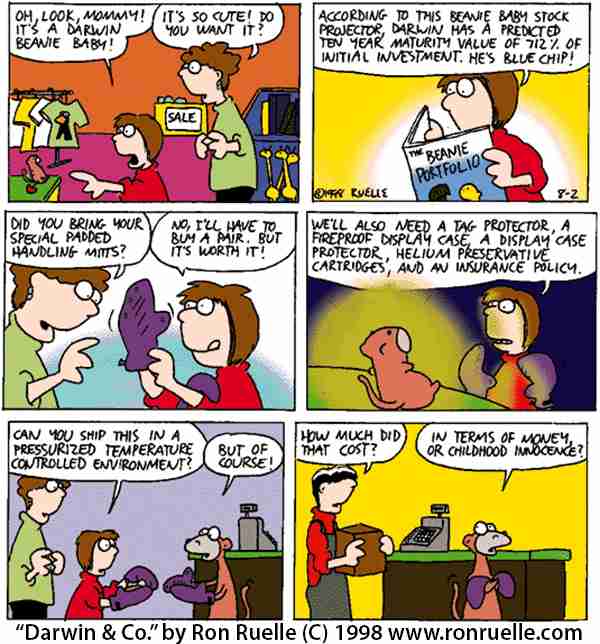 But eventually, the market became flooded, collectors got tired of the chase, and the market tanked. Beanie Babies were so popular that no one wanted them anymore. And the kids who made up the original target market were getting old enough to not care about stuffed animals as much anymore. Ty moved onto other lines of stuffies marketed primarily as toys, not collectors items.

According to some sources, though, Beanie Babies are headed for an uptick in interest. The kids who had them the first time around are now in their late 20s to mid 30s. Which means they have disposable income (possibly) and a sense of nostalgia (maybe). Combined with the fact that the supply of these toys hasn’t grown in two decades, well, they might be worth something again. So let’s look in on some possible values for some of the rarer Beanies. Well, here’s what people are asking, anyway, along with some real world results. 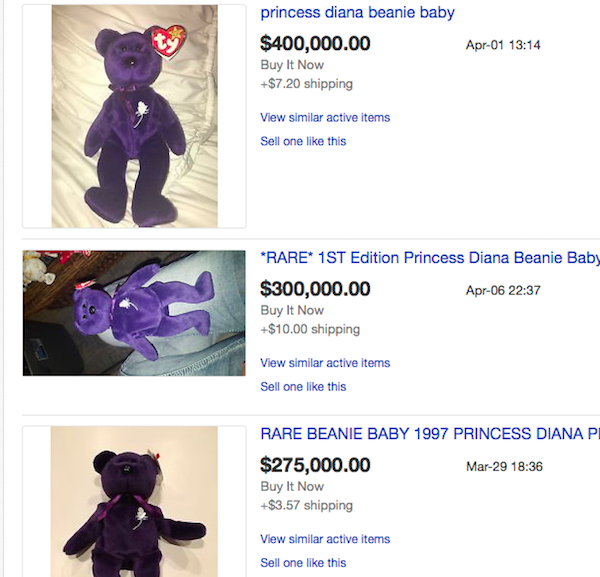 This purple bear with a white rose was released in the aftermath of Princess Di’s untimely death, so prices shot up in a wake of instant nostalgia. There are several variants for sale on eBay at very high prices. Actual value: There are several completed auctions for under $15 for these, although there are some rare variants that are supposedly worth more. Not too much more. 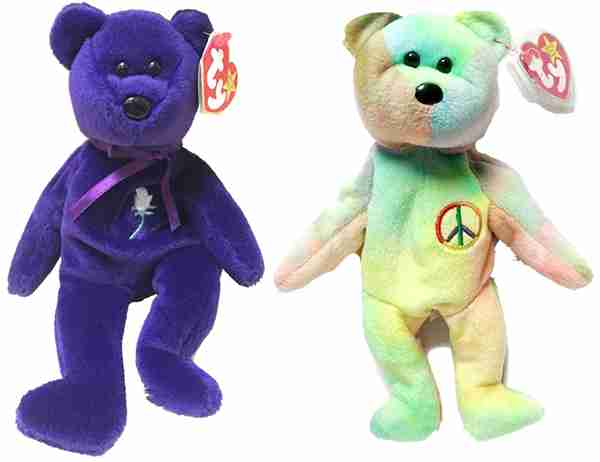 It’s got a swirly “tie-dyed” pattern, so no two are alike. Again, riding on the wave of Jerry Garcia’s death, kids snapped these up… wait, how many kids in the mid ‘90s were Deadheads? Actually, this wasn’t even an official tie in to the Grateful Dead, it just took on that nickname. Regardless, the price of these tops out well under $100, which isn’t too bad. 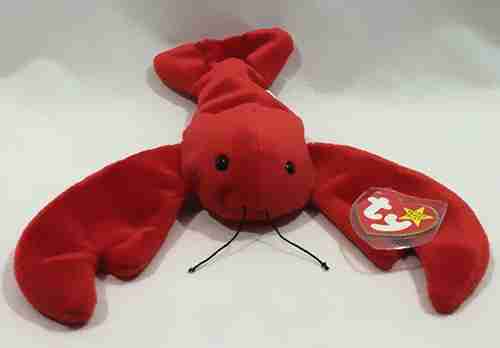 Look at that snuggly wuggly wobster… er lobster. Aside from the fact that he was one of the very first wave of Beanies, and there aren’t a lot of lobster stuffies, the value on this shouldn’t be out of whack. The very first ones had the name “Punchers” on the tag, and everyone seemed to think it was a typo, because it was quickly changed to “Pinchers,” which makes way more sense. So if your tag (you kept the tag, right?!?!) has the original name, it’s worth 10 times the regular one… so $50 versus $5. 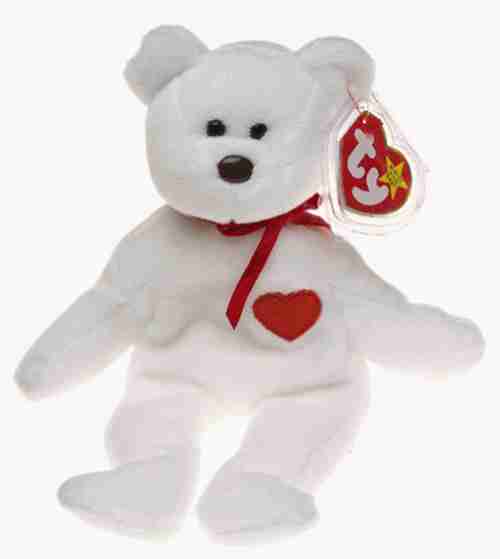 Speaking of tags, the early Valentino bears have a rare typographical error (“Surface” is misspelled as “suface.” Somebody must have been fired for that one, right?). But the error isn’t on the heart shaped paper tag, it’s on the little tag that’s sewed on to every stuffy. With a later correct later version, it’s a $5 bear. With it… Maybe $25. 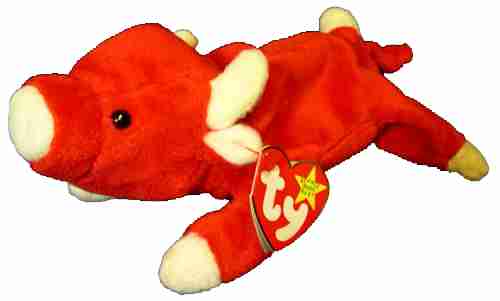 Actually, it’s a cow.  It looks a lot like the Chicago Bulls mascot, but for some reason people mistakenly call it a pig. And for some other reason, people want a lot for these critters. Maybe it was because this was the height of the Bulls’ run in the NBA. In reality, You should be able to find one for around 10 bucks.

The lesson here is, yeah, some of these are worth some decent money, possibly more than they cost when new. But not retire-to-your-own-private-island money. The best advice, really is this:

One more thing… if you do collect Beanie Babies, add yours to our database! In fact, we could really use a curator or two to help maintain accurate and complete listings for this subject! And while you’re at it, start buying and selling them too!

Great story. I had a friend ask me about Bean Baby value. She seemed to have many of the “rare” ones. I find it fascinating how a market can rise and fall and rise again.

i collected these for my son when he was about 3 years old. we decided to go through our attic and there they were. all original with tags. have most of the rare ones

You can offer them on hobbyDB but it might take a while (there are no listing fees).  We wrote this article on how to best sell a collection that might help.