Diecast Hall of Fame Nominations Now Open for the Class of 2017!

As some of you may know, we’ve been working with a bunch of awesome folks in the Diecast community on this year’s Diecast Hall of Fame! We could not be more excited to share that the Diecast Hall of Fame celebration will take place during SEMA on November 2nd in Las Vegas at the House of Blues inside the Mandalay Bay Hotel. Join for a nightcap at 9:00pm to celebrate the new inductees. You can buy your tickets here. 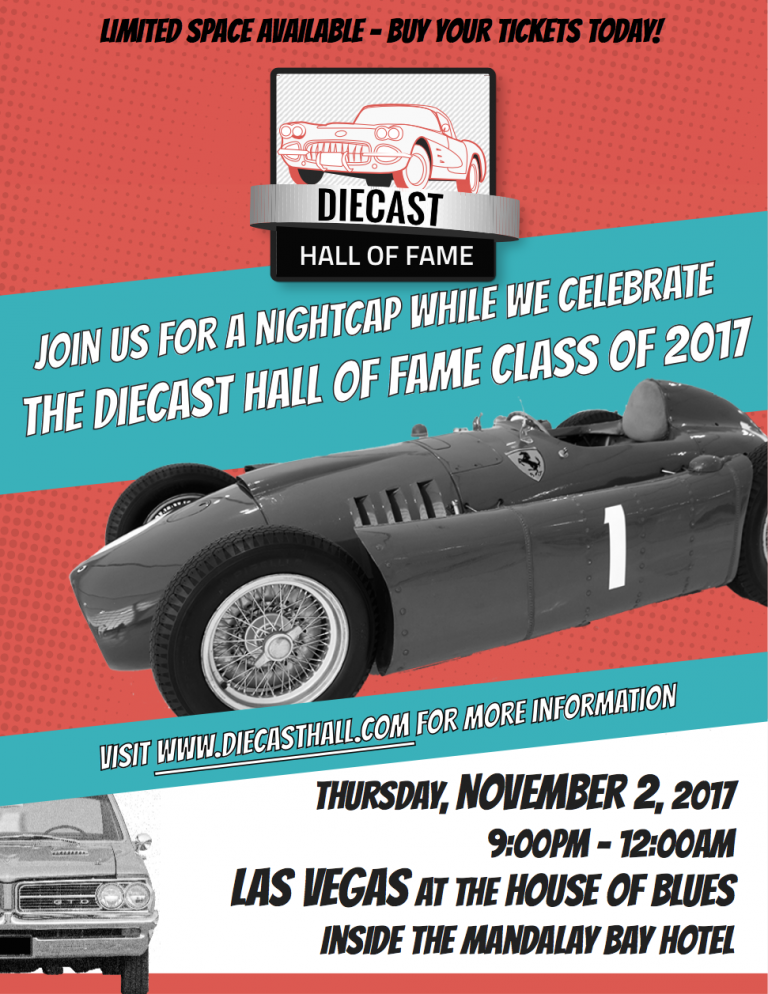 Of course that means that nomination season is starting NOW! Diecast Hall of Fame nominations are open!

To begin the selection process, we’re asking you to nominate your favorite diecast legends. Anyone who you think should be recognized for their outstanding contributions to our community. We are looking for nominations for the following categories –

Feel free to make multiple nominations, but please only submit one vote per person, model, or brand.

Once May rolls around, we’ll close the nomination process, so the newly appointed Diecast Hall of Fame Selection Committee can review all submissions. The selection committee consists of some of the most experienced automotive minds in the industry. Andreas Berse has been the Chief Editor for Modellfahrzeug, the largest German publication on model cars of all scales for the last 22 years. Matt Boyd is the Co-Founder and Editor of DieCast X Magazine. Matthias Braun is the General Secretary of the AvD, the most traditional automobile club in Germany. Carson Lev was a designer for Mattel and past Director of Hot Wheels Licensing. Chis Walker is a high-end customizer and was inducted into the Diecast Hall of Fame in 2009. And Mike Zarnock has written a number of books on Hot Wheels.

The Committee will select the top five nominations per category, and then, the voting will begin! You’ll be able to vote on your favorite brands and models later on this Spring!

To read more about the Selection Committee, click here.

You’ll have until the end of May to vote for your favorites in the 2017 class of Diecast Hall of Fame Inductees. The winners will not be revealed until the night of the event, so be sure to get your tickets here!

Don’t forget that you can check out all the past inductees detailed profiles in the Diecast Hall of Fame Official Archive.