Over the past two years, we’ve contributed articles to Die CastX magazine for publication on their website and in their quarterly print edition. We hope you enjoy reading about a pair of Porsches that have more in common than it seems.

Porsche has always charged a premium for high performance cars, but every now and then they hit the reset button and try to offer a somewhat affordable model to entice new buyers. One early model, the 550A Spyder, a tiny, extremely lightweight speedster, gained fame (or infamy) as the car James Dean was driving when he died. Some revisionists would claim he was operating it safely and within the speed limit, but such nonsense tarnishes his legacy as a, well, rebel.

Flash ahead 35 or so years to when Porsche decided a no-frills, “budget” roadster would be just the thing for the 1990s. The 1993 Boxster Concept (a mashup of “Boxer” and “Speedster”), blended modern and vintage styling cues and proved to be an instant hit. The Boxster would soon go into production looking much like the show car (minus a few sexy details) and at a relatively low starting price, which is quite a miracle. 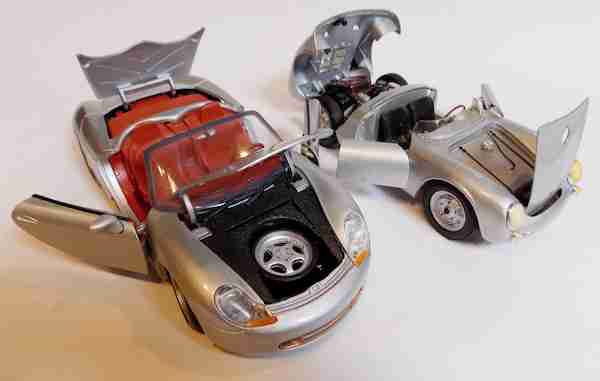 Here are two models from Maisto representing these cars in 1:18 scale. They both feature fully sprung suspension, opening doors and other panels, and show a stark contrast in the overall size of the real cars when parked side by side. Both are finished in the appropriate not-too-flashy silver with appropriate badging. 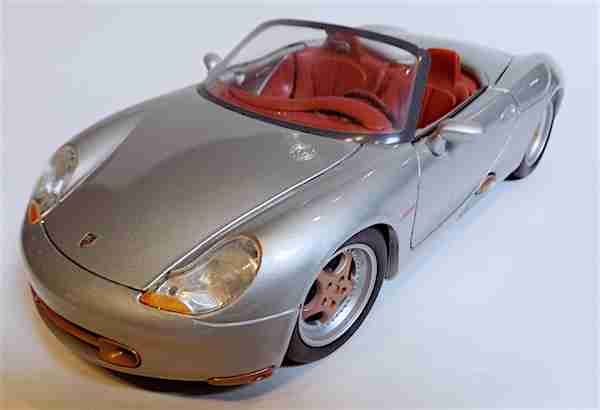 The newer Boxster concept accurately skimps on details in one important area… the drive train. Since the concept was a non-running design exercise, one could only imagine what the engine would look like at the time or where exactly it would go. The chassis is also devoid of working bits because of this omission. Maisto also made a model of the 1996 production Boxster if you prefer that version. 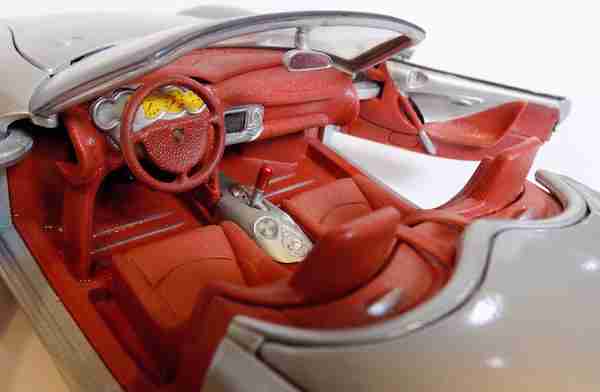 The Boxster’s interior reproduces some strange quirks that never made it into production… the door panel inserts are asymmetrical to the point where they don’t look like they came from the same car. The dashboard and rear view mirror also echo this lack of symmetry. Also, the seatbelts are mounted to go over the occupants’ inside shoulders instead of the more common arrangement. The soft red surfaces in the model look and feel like you could sit in them. 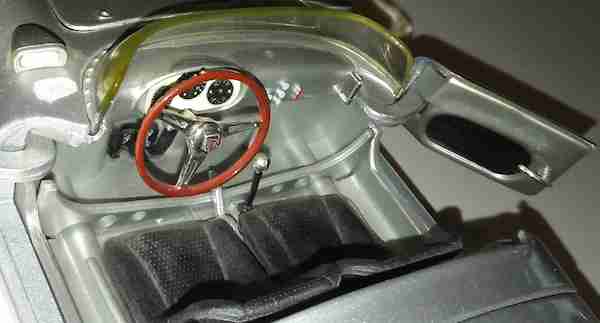 Such details are of no concern on the 550A, as there was very little interior included in the original 550A. And seatbelts were just considered extra ballast. Nonetheless, the details and surfaces that are present in the Spider look and feel like they were hand assembled from as few extraneous components as necessary for the sake of speed and simplicity. The super thin steering wheel is beautiful, too. The skinny tires and bare steel wheels look perfect on this car. 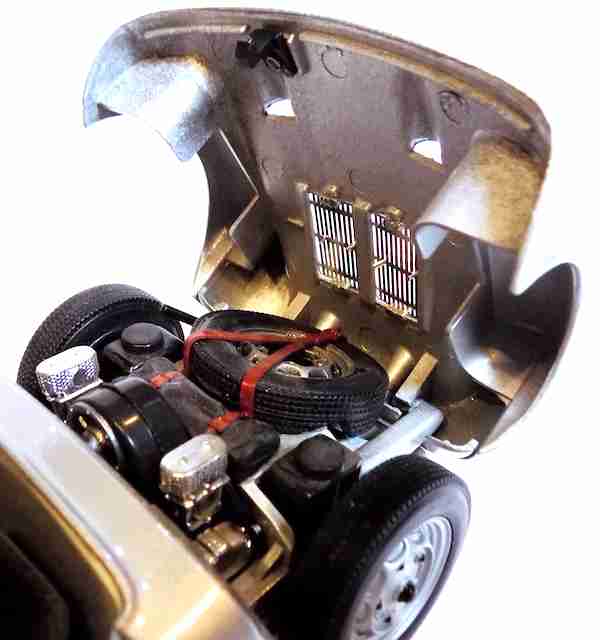 Under the hood, a very tiny engine is dwarfed by the spare tire. Up front, there is little more than a gas tank taking up the entire compartment. The chassis on this one is also quite smooth with only the necessary bits hanging down from the engine bay. 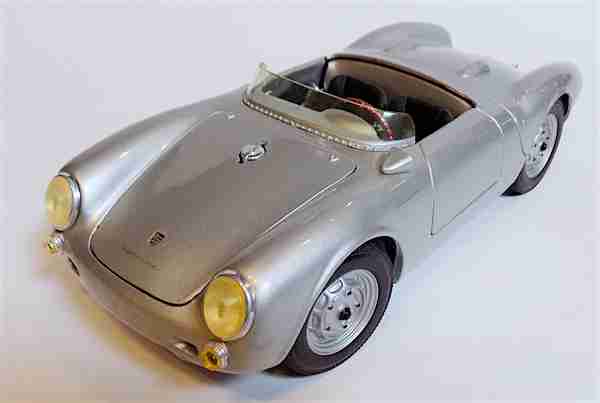 It’s great to see these Maisto Porsche models representing something besides the usual 911 offerings. Side by side, the 550A and Boxster make nice bookends for two cars that aren’t that far apart in concept.