Challenger Joe Has a Great Store and a Cool Story

Challenger Joe is one of the newest sellers on hobbyDB, and his hobby DB store is a bit different. So is his story. Challenger Joe (Joe Rothpearl, but he prefers to just use the nickname online) is a car guy… he likes all kinds of interesting rides, but you can probably guess his favorite, right? Yeah, he loves some MOPAR, but specifically Dodge Challengers.

“I built model cars as a kid,” he explained, “whatever cars caught my eye at the time.” But when he was a teenager, his perspective was locked in forever when his friend let him drive his 1970 Plymouth Barracuda. “Cool cars stop you in your tracks when you’re a kid. I was 15, so I didn’t have a license yet, but we did some donuts in that car, and I was hooked.” (He fondly remembers the /66 1/2 Charger owned by his family when he was three.) Like many of us, he went on to own other cars over the years, some more interesting than others, always longing to recreate that initial burst of excitement. 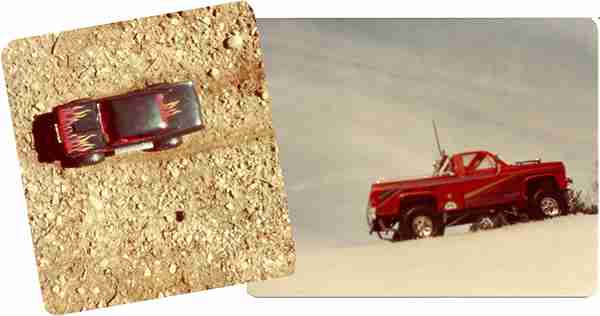 When Dodge first showed off their new retro styled Challenger concept in 2006, the bug bit him again. “I figured there was no way ever they would really build that car,” he said. But when they came out with a production model a couple years later, his jaw dropped. But he still didn’t get one yet. Then, when his father and father-in-law died not too far apart, he decided life was too short to not drive a cool car. “I went online to look for the exact package I wanted and found one only 10 minutes away…”

Not just any Challenger, though… he bought his with the upgraded RT package (kind of rare), the Super Track Pack (way more rare), the Classic Package (unusual) and in a particular hue (Billet Silver Metallic) that turned out to be very limited. “The tsunami in Japan disrupted the supply of certain colors for all auto manufacturers for awhile,” he said. After that, Dodge moved on to other colors. According to Chrysler, his car is one of only nine ever produced with that exact set of colors and options. Rare as the car is, he drives it daily, including the harsh winters of upstate New York.

About the store.. You may have noticed he deals primarily in models of Dodge Challengers. Part of that comes from the fact that he collects every possible mutation of those models and has a few extras. The collection includes early models from Matchbox and Hot Wheels (The Rodger Dodger is one of his all time favorite models) as well as newer models in every conceivable scale. 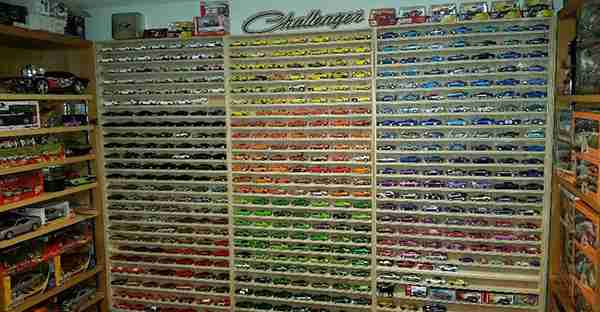 Besides this wall of miniature Challengers, which is about half of his 1:64 collection, Joe collects records and comic books.

The other thing about the store… all of his proceeds are being  donated to charity. “The money will all go to the Rochester Challenger Miracle Field,” he said. Wait a second, did he get to name this place? Nope, there’s a division of Little League baseball for kids with various disabilities, called the Challenger Division, and these fields are designed to cater to their needs. On top of his donations, hobbyDB is waiving its usual fees for his store so the maximum amount can go to good causes.

Joe deals with his own struggles daily as well. He gets debilitating migraine headaches on a regular basis and has also had a couple of neck surgeries. Despite all this, he’s an unrelentingly positive guy. “I have some good days and some not so good days,” he said. “I’ve tried all kinds of therapy, but when I’m in my Challenger, I feel no pain. It’s the best medicine. 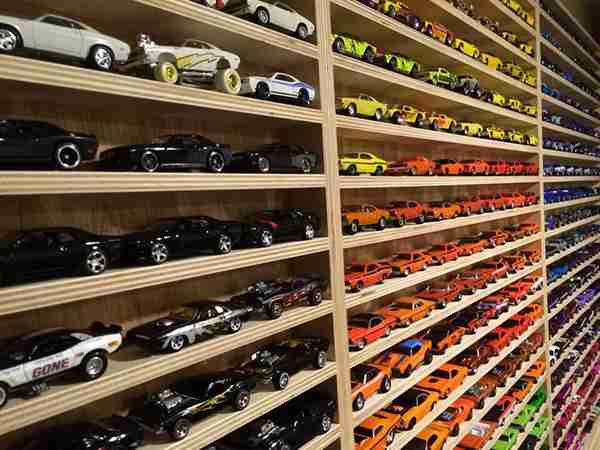 As we mentioned, he’s a car guy in general. “I like any car that’s interesting,” he said. “I don’t want to get caught up in the negativity of only liking one brand or one model and saying bad things about the rest,” he said. “I’m a positive person. I like to make people smile. It’s my super power.”

His website, as the name indicates, is devoted to the Challenger of the Day. It might be a real car one day, or a model the next. “It’s nice to mix the different interest groups together,” he said. “I just like bringing people together for common ground, making people smile.” Visit the Challenger Joe Store on hobbyDB and you can help do that too.

Thanks hobbyDB for the great article bringing awareness to this great cause! If you would like more information about how you can get involved or help, please visit the link below.

Hitting Home Runs For A Miracle