This article was originally featured at safestore.com, a provider of personal and household self storage – something a lot of us collectors need 😉

Every once in awhile we come across a collector’s story that just seems to make sense to us. So when we came across an article that opens up with, “anything that’s got four wheels that looks good” we continued on and wanted to share this fun collector highlight with you.

When asked how he felt about his collection being photographed Colin Hughes said, “I’ve never seen them all out of the box in one go…So I’m really looking forward to taking the whole collection out and talking about it.”

For self proclaimed car fanatic Colin Hughes, collecting began as it does for many of us, with a hobby. Colin’s hobby, slot cars.

Of getting into collecting he says, “I started collecting cars about 6 months after getting into racing. The cars were being damaged and I liked them when they were pristine so I started buying one to race and one to go on the shelf.” 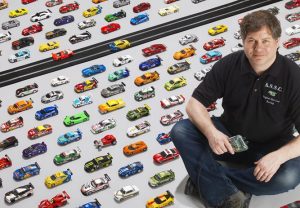 Colin is also passing on his passion for collecting to his kids by collecting LEGO, Skylander and Disney Infinity toys with his children.

Now Colin has amassed one of the largest slot car collections in the UK, with over 1,200 cars, it includes everything from classic rally to modern GT, LeMans, and prototypes; he even has a sterling silver Dodge Viper (with an edition size of 300!). Our friends over at Safestore (The largest self storage provider in the UK and second largest in Europe) interviewed and did a write up of Colin in their “Stuff is Great” blog series.

Colin seems very much the typical father of two and when asked about owning one of the largest collections of slot cars in the UK, he very humbly responds, “I’m just Slot Colin.”

That answer doesn’t do him or his collection justice and we never would have known his story if not for the safestore blog. A fun, quick read that highlights a fellow collector and shows that the love of collecting is alive, well and still being passed from generation to generation.

Check out the full highlight of Colin: ‘Meet Slot Colin’