Otto Kuhni, one of the great American artists of the last half century, passed away recently. If his name isn’t familiar, you surely knew his work. He was the artist who created the overall look of the new Hot Wheels brand in 1968 and continued to work for Mattel on and off until just a few years ago. He did the art for the carrying cases, advertisements, lunchboxes, and most importantly, the packages those toys came in. The fiery orange-yellow-red blister cards instantly created an identity for the whole brand, and influenced diecast packaging ever since. 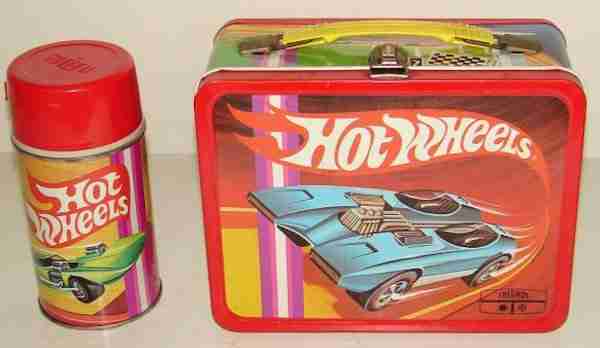 Prior to his designs, diecast packaging was generally plain and not terribly interesting (although there were terrific exceptions). Most diecast cars were sold in boxes, such as Corgi, Dinky, and of course, the company whose name comes from those boxes, Matchbox. A few cars were offered in blister cards, however. Here are some early designs as well as later cool blister cards where companies realized that toy cars are fun, and they should be packaged that way too. Much credit has to go to Otto’s ideas. 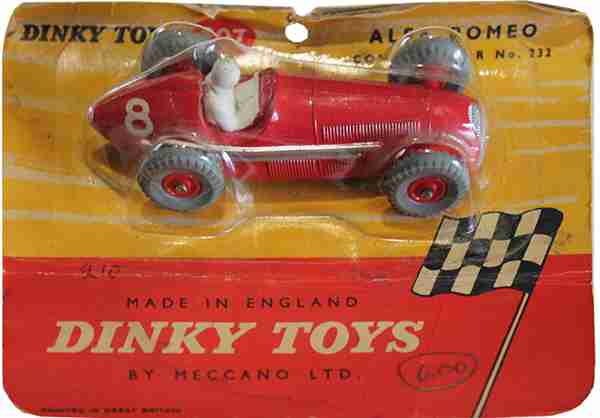 This Dinky Alfa Romeo really looks pretty amazing on its rather basic package. The layout is simple, and colors are very limited due to printing technology at the time. Even the effort required just to change the name and model number was something of a pain in those days. One odd touch is that the car is mounted so high on the card, something you don’t see today. 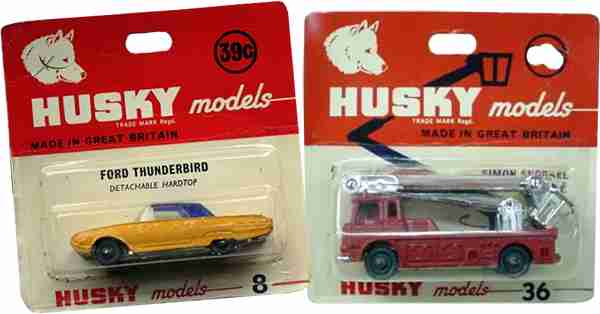 Husky, an early attempt at 1/64 models by Corgi, also featured simple, not terribly colorful blister cards. This fire engine is unique in that someone got a little creative and added the silhouette of the cherry picker as if it were rising from the vehicle itself. But most featured identical base art to keep costs low. Another neat thing… if you see this era of Husky card, there is often a hole punched in the circle where the price is located, like on the fire engine. Presumably, that happened when a store wanted to charge a different price. 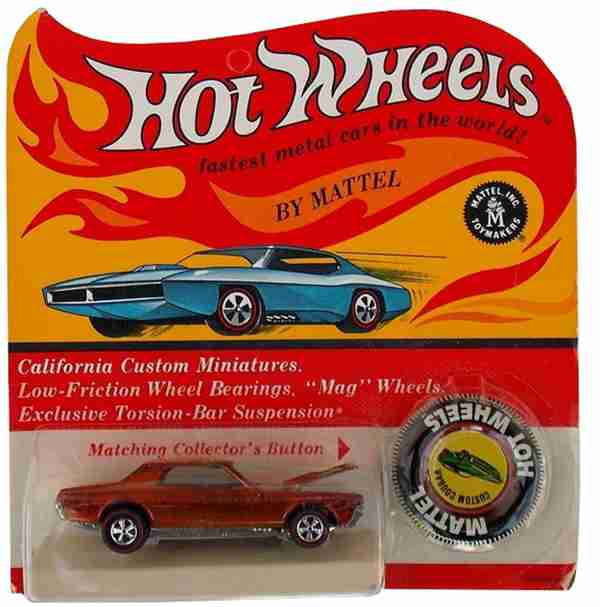 But then along came Hot Wheels! Brightly colored, dynamic graphics, a custom cut shape, and even a bonus in the blister in the form of the collectors button. (Note the off-center hole punch, arranged to allow the asymmetrically weighted card to hang level.) Not only were the free wheeling cars revolutionary, but the Hot Wheels blister cards themselves created a stir with consumers – and with other toy companies. 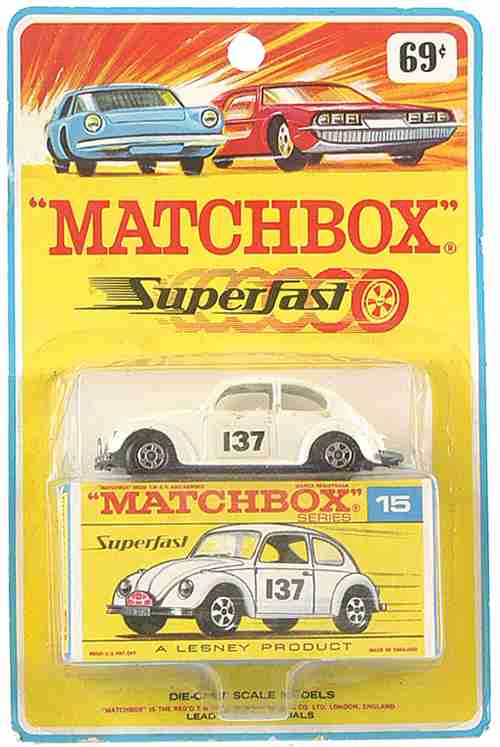 Competitors responded quickly. Matchbox began retooling their cars as the SuperFast series, with similar speedy wheels and wilder designs on their new cars. The packaging moved to blister cards, though the art was not quite as exciting as what Mattel was offering. Hedging their bets, Matchbox still included the traditional box inside the blister as a bonus. In fact, many of their cars were still available right in the box, same as always, as if the company saw this new fangled packaging as a fad. The combination of old versus new wheels, and different packaging options has created a colossal number of variants for collectors. 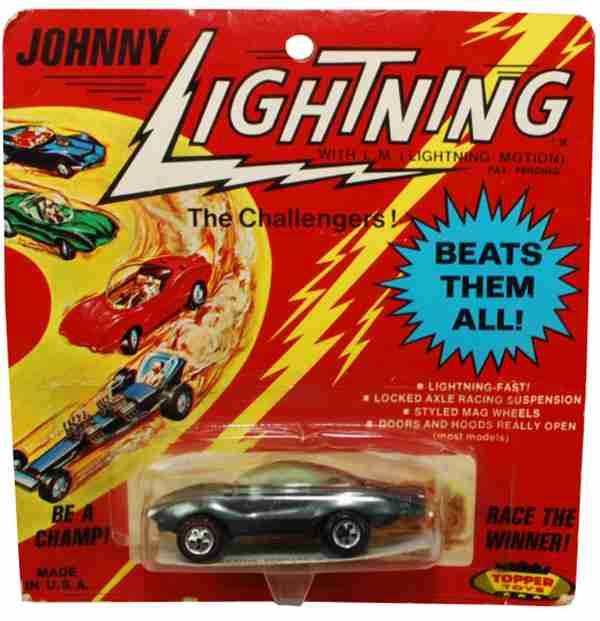 Johnny Lightning was a new startup from Topper Toys in 1969. Thematically, they represented the closest competition to Hot Wheels, with cars ranging from crazy fantasy designs to mild customs, all built for speed. The packaging had a chaotic, exciting design to match. Curiously enough, they had to make a design modification early on… the “BEATS THEM ALL” tagline ran into a legal challenge, as it could not be proven that JL cars could indeed do that. It was modified to “BEAT THEM ALL” to imply possibility, not fact. 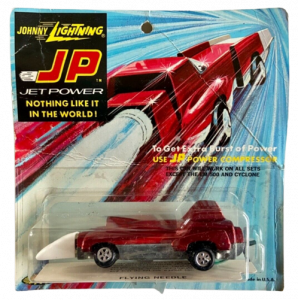 A later line of JL cars, the Jet Power series, featured their own bespoke card design, with a very energetic illustration of one of the cars in action. Sadly, these new cars underperformed the promise of the packaging and were a flop. More sadly, Topper ended the entire Johnny Lightning line (and just about everything else) after only three years due to company-wide financial difficulties. 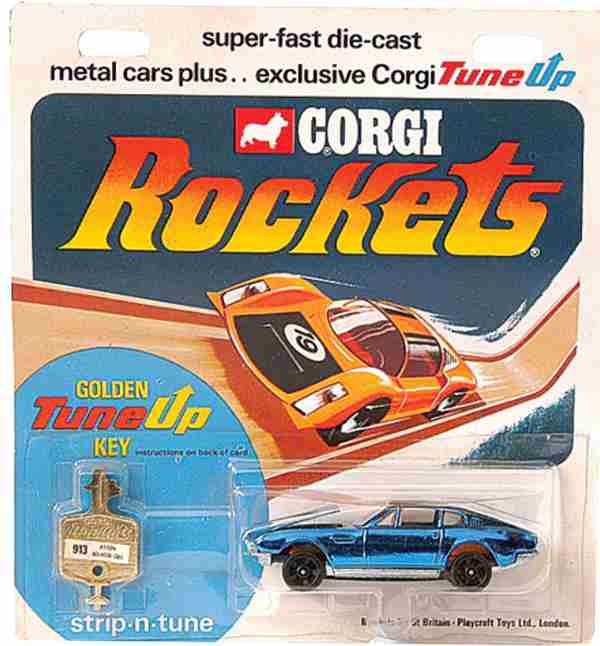 Corgi tried to compete in the high speed 1/64 market with their Rockets series. Note the two hole configuration on the card, requiring double pegs to hang the car from. The folks who stocked the stores couldn’t have been happy about that. Cool graphics, fast cars, but no match for the Hot Wheels marketing behemoth, at least in that scale. Corgi remains a major force in diecast, but wisely decided to focus more on their main market of 1/43 and larger cars. 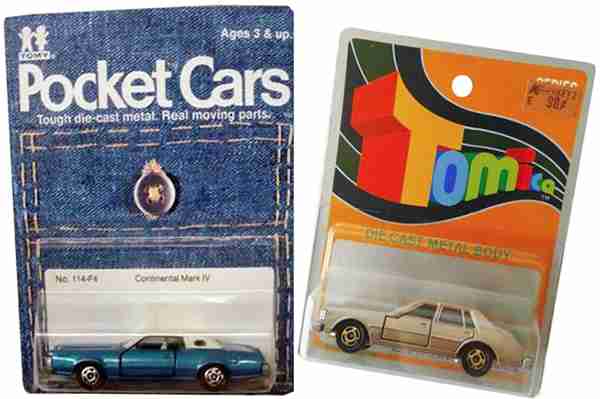 Tomy (Tomica) had a lot of fun with their packaging as well. Their Pocket Cars series was printed on a card that looked like denim, complete with stitching and buttons. Such designs really stood out from the pack and looked impressive together on the pegs at the stores. Many of their later series like the Series 60 also had playful graphics. 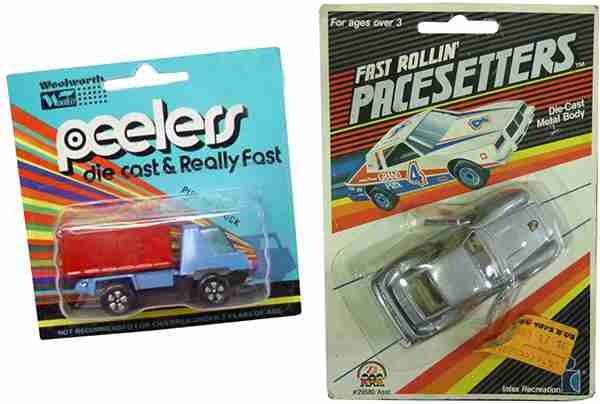 Minor brands like the Woolworth’s /Woolco Peelers cars saw the benefit of an exciting package, even if the vehicles themselves were a notch below in quality from the big brands. Or consider what Zee Toys was doing with this Pacesetters blister, mounting the car in a position to go along with the lines of the graphics.

It’s hard to say where modern diecast packaging would be today without the influence of Otto Kuhni’s designs for Hot Wheels, but it’s safe to guess playtime would be little less exciting (also read Otto’s Diecast Hall of Fame Obituary). If you have a favorite diecast blister design, let us know about it in the comments!

I think that Hot Wheels has recently upped the game with card designs such as the one from the Japan Historics Series like this Toyota 2000 GT.

I ripped open all the HW blister packs and tossed them as a kid.  Never really noticed them. But I kept all the catalogs and studies them. Oh well. The Matchbox boxes, I kept.  Now I appreciate their designs and different marketing approaches…

Hot-Wheels had always a great number of nice Blister packs like the following examples show.

Eventually people got desperate for new names to call toy car series. Behold, a Yatming marketed as a “Stampeder”…

Hallo guys..some of my favorite blisters ..:

Blister Card Art - what is your fav one? - HobbyTalk

I really enjoyed this article. How about this beauty?

Just for the record, Matchbox introduced blisterpacks for the US market as early as 1963, as an alternative in addition to the traditional box packaging, for those supermarket-type stores which preferred them.

I personally do not like any packaging which you have to destroy to get at the contents. To me, recloseable boxes are always preferred.