Over the past few years, we’ve contributed articles to Die CastX magazine for publication on their website and in their quarterly print edition. We hope you enjoy our tribute to Adam West and his Batmobile of choice. 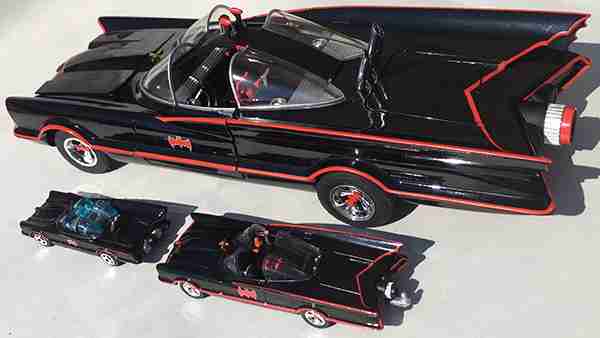 June was strange month, as James Bond and Batman died around the same time, leading to speculation that they were one and the same. Bruce Wayne died, too. Go figure.

So, R.I.P. Roger Moore. But here and now, we’re talking about the legacy of Adam West, who played Batman on TV and in movies for several years in the 1960s. And since we’re all about diecast… let’s talk about his car. 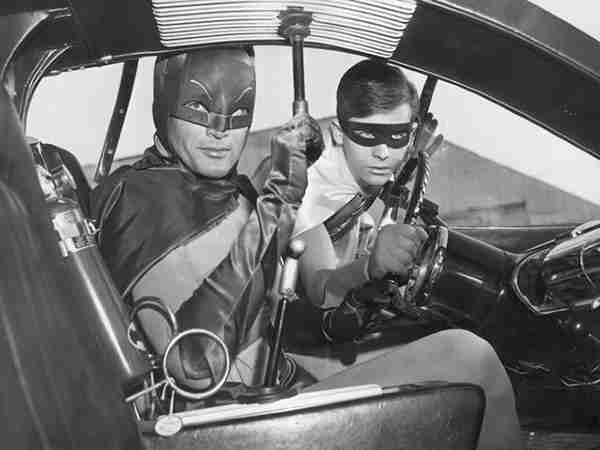 Customizer George Barris was given the 1955 Lincoln Futura concept car and about three weeks with the mission of creating a ride worthy of the show. To say he knocked it out of the park is an understatement. Equal parts sinister and ridiculous, his resulting car fit the tone of the show perfectly.

The earliest model of the TV Batmobile came from Corgi, complete with removable (and easy to lose) figures and launchable (and even more losable) missiles. Luckily, there are repops available of those pieces. Aurora made a ThunderJet slot car version of the car as well if you wanted to drive it for real, because of course you did.

And that was pretty much it for that time. You would think Mattel would have considered taking advantage of this hot new car to go along with their hot new diecast brand. But it didn’t fit the Hot Wheels plan at the time, probably due to licensing issues and the fact that the car could only be painted one color while still making sense.

The Hot Wheels 1/64 Batmobile has been released in different colors.

What a difference a few decades makes. Hot Wheels managed to get a license to reproduce the TV car, as well as other Bat-vehicles, and they took major advantage. So off course they did a 1/64 version, (above) a welcome addition to anyone’s fleet. Their mainline Batmobile would later be released in new colors for Halloween and other occasions, and there were also Treasure Hunt Versions. The details are sort of chunky and rounded to make them kid friendly, but who could complain?

The 1/18 Batmobile from Hot Wheels came in this regular version and a super detailed edition.

But they also thought bigger. Hot Wheels created a 1/18 scale model, (above) with incredible detail for a car that retailed for about $25 or so. The proportions, textures, finishes and details on the model are superb. And if that’s not enough, there was also a special limited edition model with even higher detail levels. 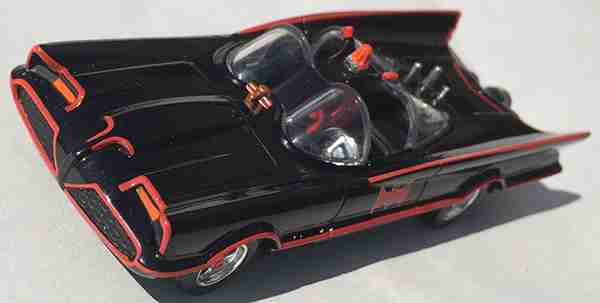 The 1/50 scale Batmobile has terrific detail for its scale.

The best model of all might fall in between those two sizes, however. Hot Wheels created a series of 1/43ish “classic” vehicles, including the Batmobile. To be accurate, it’s actually, 1/50 scale (above) .  For the size and price, the detail is astonishing, rivaling the bigger car, complete with red pinstripes and bat knockoffs on the wheels. The odd touch here… there is a trailer hitch behind the jet engine. But if you can look past the combustible possibilities, it’s there to tow Hot Wheels’ matching BatBoat with trailer. Yeah, that wins.

You can debate which version of the Batmobile reigns supreme (The Tim Burton and Christopher Nolan movie versions are the other major contenders) but for a certain generation, the Barris/TV/West Batmobile is the only one you’d ever want. And Hot Wheels has created some of the best models of it.

Hotwheels did a good job on the Adam west/George barris batmobile thumbs up.