How the Colorado License Plate Evolved Into an Icon

At hobbyDB, we love automobile related collectibles as much as we love diecast. One of the most popular bits of automobilia is the license plate, which can (or should, at least) be found on every car. And since we’re based in Boulder Colorado, let’s take a look at the history of our state’s license plates, one of the most instantly recognizable designs in the United States. 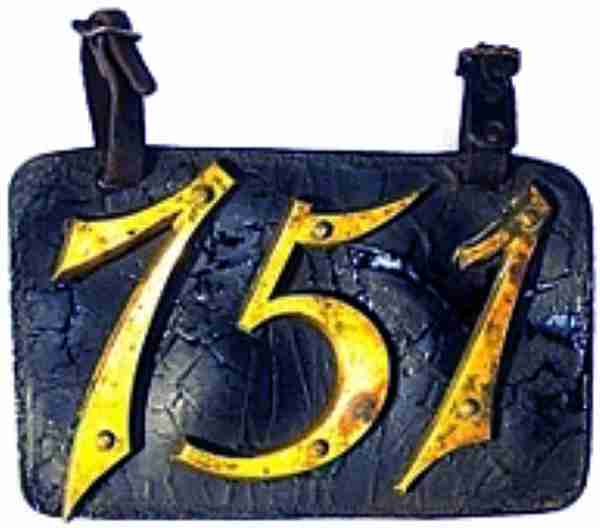 The earliest license plates came within a few years of the first cars as a way to identify one from another, and most importantly, make some money for the state coffers. The very first ones in Colorado came around 1908, and were homemade. The DMV (they probably didn’t call it that yet, or despise it as much as we currently do) would give a number to the motorist, who would then fabricate their own by attaching aluminum house numbers to wood, leather, or whatever material was handy.

By 1912, Colorado was manufacturing the plates, a process that was far more time consuming than it is today. The first designs just said “COLO” in stacked letters on one side and “1912” on the other with a 4-digit number in between. Colors varied for the next few years, but the porcelain construction stayed. Back in those days, by the way, there were no registration stickers to update your validation. You simply got a whole new plate every year, which really isn’t simple at all if you think about it.

By 1916, someone had figured out a process to make the stamped style of plates that still exist to this day. By creating raised and painted letters, it became hard to couterfeit these plates. Colors remained in the traditional range until 1917, when black on pink was the choice.

Another interesting bit of design change was happening around this time as well. Those first stamped plates were about 12 inches wide and 6 inches tall, but the shape would become more horizontal some years, in some cases to accommodate more characters.

Not a Colorado plate, but pretty neat, huh?

By the mid ’20s, the 12×6 rectangle became the standard for most states. Even though the dimensions eventually became a federal requirement, Tennessee decided in the 1940s that the shape could be something fun. For several years, theirs were cut in an approximation of the outline of the Tennessee border. The most noticeable holdout in modern times is the Northwest Territories of Canada, whose plates form the silhouette of a polar bear.

Back to Colorado, however, a state with a rectangular shape like a license plate. The designs swung wildly from one color combination to another: orange on black for 1932, black on orange for 1933, black on yellow for 1934, white on blue for 1936… 1938’s plate starts to look familiar with white on turquoise, but the parade of colors would continue into the late 1950s. 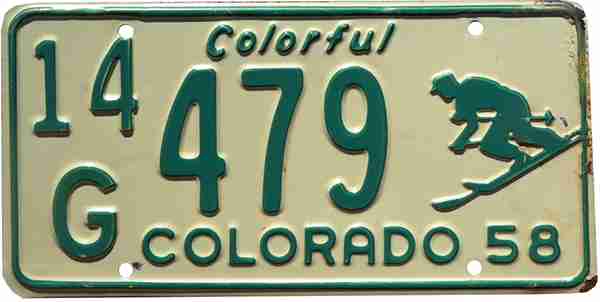 1958 featured one of the first license plates in the nation to include a graphic other than numbers and letters. A silhouette of a skier showed up on the plates, along with the word “Colorful.” And speaking of color, this was the first year for dark green, though paired with light green. 1959 saw the debut of the now familiar green and white (getting closer…) and finally, 1960 defined what a Colorado License Plate should look like. Jagged white mountain peaks with green sky and lettering became the template for most future plates. 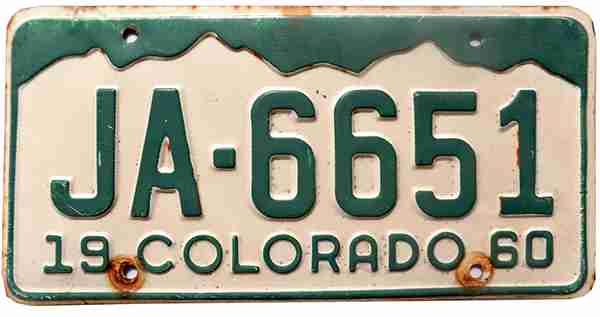 The green and white mountains debuted in 1960. The same shapes and colors have been used almost continuously since with some variations…

From 1962 to 1972, Colorado plates would alternate between these two designs. Notice how the mountain shape flips upside down.

The color arrangement was flipped in 1962 (green mountains, white sky) and then… the whole thing was flipped. Using the same stamp, but upside down, 1963 saw the entire border rotated to put a sliver of mountains at the bottom, with the lettering in the sky. The plates would alternate between these two looks yearly until 1972.

For some reason, 1973 went with a plain design (except for the word “Colorful”), and 1974 tried a busier version of the mountains with “Colorful” wedged in. But each of those designs would only last one year. 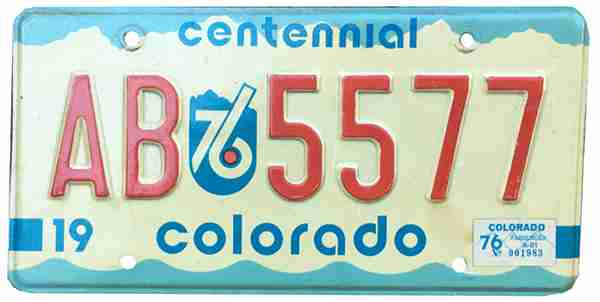 To celebrate the Colorado Centennial, 1975-76 used a special light blue and white design with the state’s “76” logo in the middle, sandwiched between different mountains at the top and wavy water at the bottom. 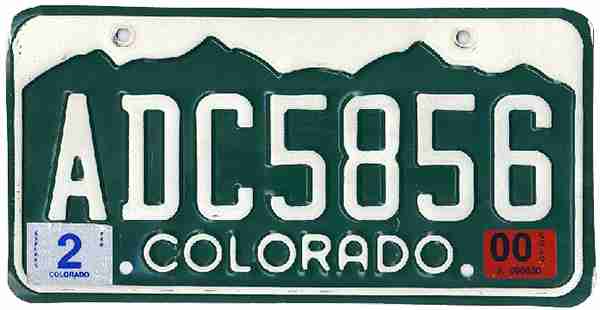 In 1977, the familiar green and white peaks returned for good. Those peaks were sharpened up a bit in 1993, but otherwise, there were no major changes for 24 years. One thing that vanished around that time was a stamped year… from that point on, drivers would adhere date stickers to the plate every year. 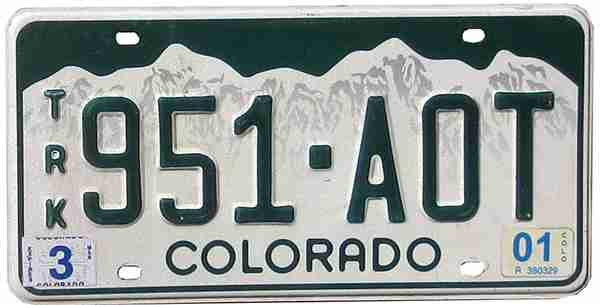 In 2000, the mountains switched back to white (reminiscent of the 1960 plates) along with some subtle silver detail, and the plates have remained the same since. Notice that the mountains have also flipped horizontally, left to right from the previous arrangement. Another change was the mountains themselves were flat, no longer stamped in 3D. Even though there are many commemorative and special use plates in use today, they all show the same peaks, in different colors depending on the type. 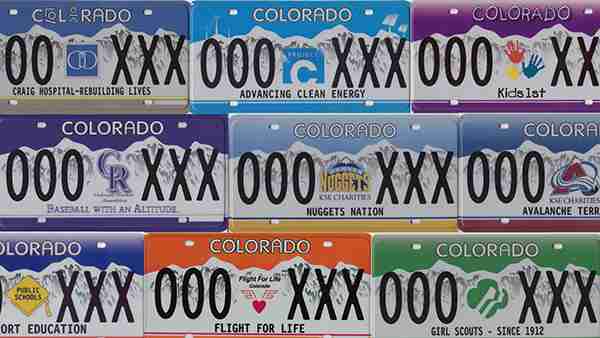 So what’s the hardest Colorado plate to find? Depends what you want do do with it. Obviously the older, the rarer, and with fewer cars back then, there were fewer plates made to begin with. Colorado has required front and rear plates since the earliest days, except for 1943-46, when only a rear plate was required. Conserving steel for the war effort is the likely explanation. For the first time in state history, drivers were not issued new plates each year, but instead, attached a small metal year plate in the corner over their old designation, one of the earliest instances of multi-year plates.

In answer to the question, if you just want to hang them on your garage wall, obviously the 1943-46 plates are rarest, along with the very oldest examples. But if you want to put correctly dated plates on your vintage car, you would only have to find a single plate for those WWII years. For other years, you have to find a matching set, which might be a lot more difficult.

If you have a history of your state’s license plates hanging in your garage, add the designs to our database!

Interesting blog! Wish I had never given up my original Greenie plate.

Agreed! Having the pre-2000 green plates is better than a “Native” bumper sticker to prove how long you’ve been here!

So, my 1997 issued green license plate currently attached to my 2019 registered vehicle, is something of an accomplishment? I love my plate it’s three letters followed by 6969….Hilarious state issued number

Excellent! I have a plate issued in 2001 that is now on its third car, but the number isn’t as fun as yours.

I prefer to get new plates when I get a new car though, so now I have the 4 letter/2 number white plates.

Wishing I could use a matching set of mint 1963 CO vintage plates I found tucked away in a corner of the garage when we moved onto our property.  Just about to register a brand new car too. Feel like lobbying the CO DMV officials hard for it. It’s the state vehicle, a Subaru, vehicle resides on a 1905 farm in Boulder County, the mountain history of that 1950-1980 mine to ghost town transition period is fascinating, the counterculture influx in the area in the late 60’s – early 70’s developing, the CO ski scene in it’s early development, one could basically go anywhere in CO’s public lands unrestricted and less people to see while there. 1963 CO was during a dynamic year in the state’s history and should be represented. What better of a way than repping on the state car and registered in the quintessential CO county? Maybe others would see it on the road, and regardless of age, have visions of CO in a distant period when the mountains were free, similar to the new generation of people populating CU, the foothills, and the worn areas left behind by industry past.

Thanks for writing in, can you show us the plates here?