Aside from Christmas, there’s no holiday that inspires decor, commemoratives, and good ol’ limited edition fun as much as Halloween. As the holiday rapidly approaches, we thought it would be a good time to look at some of our favorite Halloween collectibles. 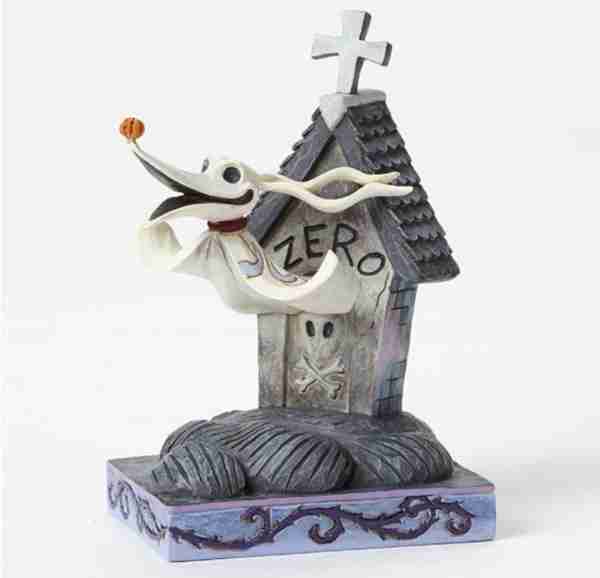 First of all, a question… is “The Nightmare Before Christmas” a Halloween movie, or a Christmas movie? Or should you just watch it every night for two months straight between both holidays? Regardless, there are so many great characters to base collectibles on. Nearly 25 years after its theatrical release, the Tim Burton stop motion masterpiece has only grown in legend, and more items pop up every year. This sculpture of Zero and his dog house is pretty neat. 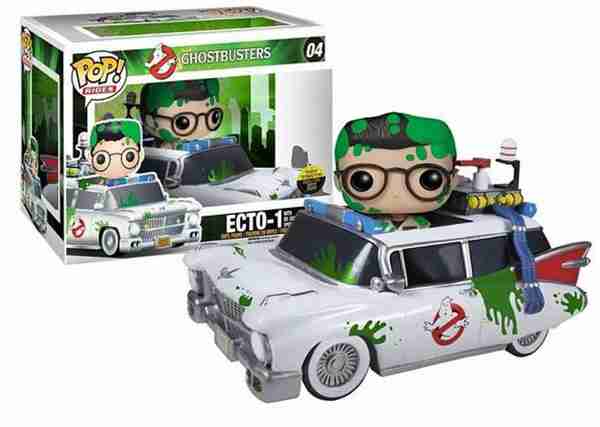 Oddly enough, many horror movies have become associated with Halloween, even though the vast majority of them have nothing to do with the holiday. “Ghostbusters,” more comedy than horror actually, has become another favorite movie that embodies the fun of Halloween. There is no shortage of collectibles from the classic 1984 movie (as well as its sequel, the 2016 remake, and the cartoons). 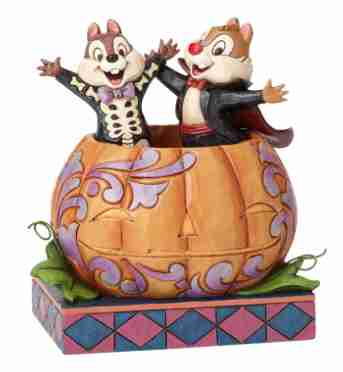 In fact, Halloween has an interesting distinction for fans in that anything gothic, spooky, scary, or macabre fits in. It doesn’t matter if they are officially part of the holiday or not. Heck, you can take any popular characters such as Disney’s Chip ‘n’ Dale,  put them in vampire garb, insert them into a jack-o’-lantern, and presto… instant Halloween collectible! 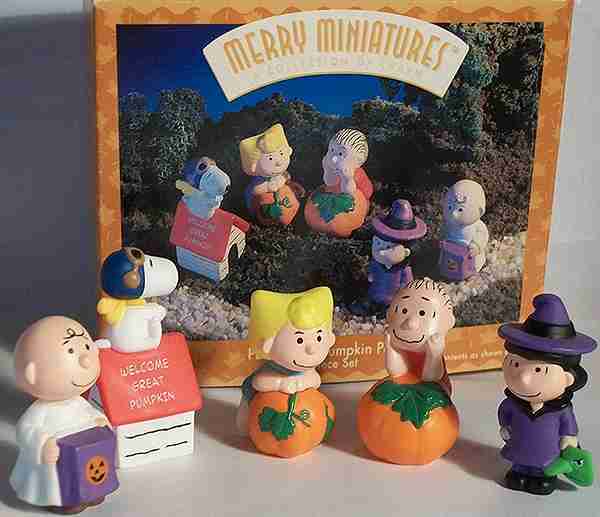 Snoopy and the Peanuts gang hold a special place in Halloween lore ever since their 1966 animated special introduced the world to Linus and his story of The Great Pumpkin. This 1996 Hallmark Keepsake set includes everything you need for a good time except the Dolly Madison snack cakes. 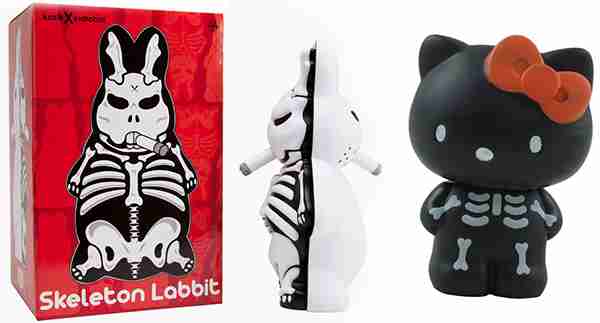 Skeletons are always a popular Halloween theme, even though they’re everywhere year ’round. (Here’s a fun joke to play on little kids… ask in a scary voice, “Do you know where you can find a skeleton? INSIDE YOUR OWN BODY! Bwahahaha!” Never gets old!) Apparently Kidrobot’s Labbits have skeletons. Slightly less scary is this Hello Kitty skeleton figure from Funko. 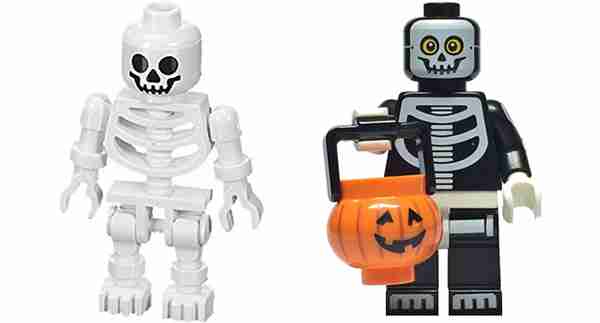 Lego has also done minifig skeletons a couple different ways. One version that came with various building sets has a bony, hollow structure, while the other version, sold by itself in blind packs, has a more traditional costume look.

Hearses are used year ’round in the real world, too, but if you park one in front of your house the rest of the year, people look at you kinda funny. But in October? No sweat. There are lots of miniature hearses out there to collect, by the way. Just in case your HOA frowns displaying the real thing. (By the way, Ecto-1, the Ghostbusters’ car, is an ambulance, not a hearse.) 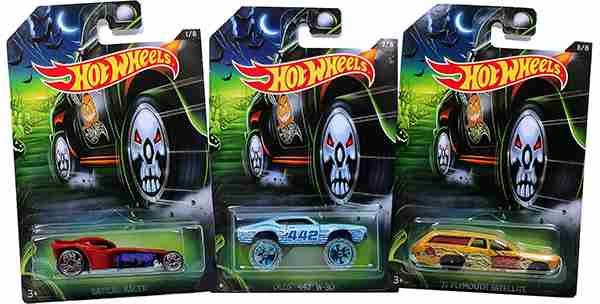 Speaking of driveable collectibles, Hot Wheels has commemorated various holidays over the years with limited edition cars. After Christmas, Halloween is probably the most popular among these series. 2017 is no exception, featuring cars with special skull-themed wheels.

For something even more limited, Liberty Promotions has offered yearly, low production Drag Bus models for Halloween and other holidays, along with Chase versions. 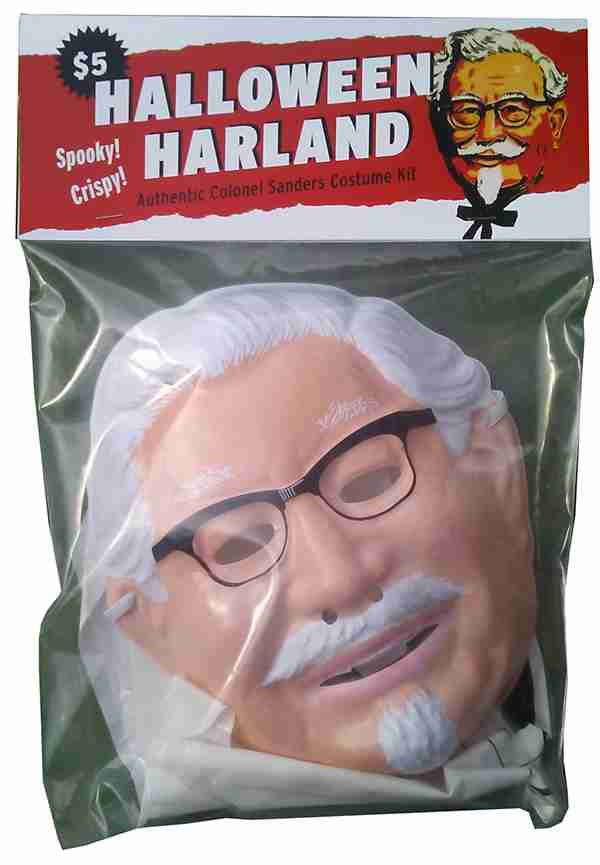 You like zombies? Kentucky Fried Chicken’s recent ad campaign features multiple actors doing off kilter impressions of the Colonel Sanders , making KFC a pop culture phenomenon. Now you can add your own take on the long-deceased company founder and spokescharacter with this Halloween Harland costume. It was available very briefly on the KFC website this before selling out.

Regardless of your age, Halloween is a fun holiday, and there are collectibles of all kinds to enjoy throughout October or year ’round if you dare.

Do you have a favorite Halloween collectible? Tell us about it in the comments and add it to the hobbyDB database if it’s not already there!